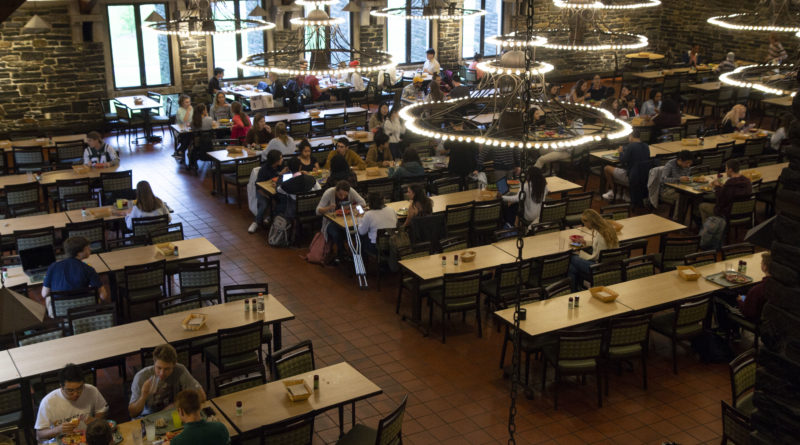 The new Dining and Community Commons project, which will be tentatively completed around Fall 2023, is set to expand dining options and offer new student lounge spaces. The design has won praise for its natural lighting and open spaces.

This new structure will have approximately the same footprint as Sharples, and will be located downhill of Sharples. The new building will house the majority of dining and food production, while the majority of Sharples will house a student center, lounges, the OSE office, and space for clubs. The project will tentatively be completed by the Fall of 2023.

Creating a student center was always at the forefront of planning. Ever since a fire partially destroyed Old Tarble (the previous student center) in 1983, there has not been a dedicated non-academic student center on campus.

“The OSE and student organizations and dining staff are all doing wonderful things in incredibly difficult circumstances,” said Smythe, “so to give these people the ability to do it in a space that is equally wonderful I think would be really terrific for this campus.”

The new building’s basement will house the control infrastructure for a proposed geothermal well field that will be placed in Parrish beach, similar to that which is currently under the baseball fields. The new building mainly consists of a dining area more than twice the size of the big room, surrounded entirely by full glass windows, surrounding a courtyard for outdoor eating.

“The main thing to come out of the surveys and meetings was a desire for light and views,” said Susan Smythe, ADA Program Manager and project manager for the dining and community commons project. “So with this scheme we’re able to suffuse dining with the entire world outside.”

Food will be prepared in proximity to students, which dining services director Linda McDougal believes will contribute to increased student-staff interaction.

“I am happy that the hard working staff of dining will now be front and center and be able to showcase their talents and the quality and freshness of foods we offer,” she said. “The campus community will grow to know and interact with many more of the dining services staff.”

Rather than sequestering food to a small (non-seating) area as Sharples currently does, the new dining area will disperse the food to various platforms, decreasing line waiting time and integrating the food displays into the overall atmosphere of the dining hall.

The Phi Psi house will be demolished in order to create a loop road which would allow delivery trucks to enter and exit the loading dock easily without having to back up the whole way. Widening the road was not an option, because there are some valuable parts of the arboretum collection that reside on either side of it.

Some students, especially those who were active in last year’s Coalition Against Fraternity Violence were upset about the announcement to tear down the Phi Psi house.

“There are a lot of ways that this space could have been better utilized as than a roundabout, and the administration completely shut these ideas down by deciding independently of students,” said Paul Buchanan ’21.

Buchanan believes that there are many promising possibilities for what to do with the space, from giving it to affinity groups like ENLACE or SISA, to utilizing it as a general party space.

“We shouldn’t have just received an email saying this is how the houses will be used,” he said. “There should have been a forum or discussion to ask what the student body wants these spaces should be used for.”

Smythe maintained that tearing down the Phi Psi house was necessary for construction of the new dining hall.

“We need to create access for trucks that make deliveries to the building daily, trash/recycling/compost pick as well as access by emergency vehicles. After looking at a number of options this summer, the best path for the road called for the removal of what was previously the Phi Psi house.”

Construction work, including the tearing down of Phi Psi house, is tentatively set to begin this summer, starting with roadwork and utilities. Building work will tentatively begin in the fall, and will tentatively be finished by the summer of 2022 so that the new building can be fully open for students coming back in the fall. Sharples will then be closed for the year, during which it will be renovated (the new building will be open during this time) in time for the tentative 2023 completion date.

Miranda Roelandt ’22 is a member of the dining services committee that has provided input for the renovation, and was one of the attendees of the town halls. She had hoped that student turnout to the town halls (numbering around ten students at either one) would be higher than it turned out to be, and had questions about some of the design choices of the construction project.

“Visually it’s such a different building than Sharples, it’s weird seeing them together, a dark squat angular building next to this big tall glass structure,” she said. “I guess they’re going to try to change the design of Sharples a bit, but it’s made of stone so I’m curious to see how much they’ll change it.” Roelandt did appreciate the choices that were made to integrate the building into the surrounding landscape. Roelandt feels the design is very modern looking and sort of takes after the BEP.

Roelandt had some doubts about the new seating plan, which according to current renderings consists mainly of small four person tables and features a platform in the center of the room for food, but added that these details will be determined much farther down the line, in a few years once construction will be well underway.

Additionally, Roelandt expressed concern regarding the state of entrances and exits in the building.

“I think they should work more on the entrances and exits, especially for people coming up from across the tracks,” she said. “It seems like they expect most people to come in through the original Sharples entrance, but I would assume most people will come in through the middle and it seems like that entrance didn’t have that much of an emphasis,” she said. Roelandt also brought up the issue of traffic flow, explaining that since many diners coming from the other side of the tracks will enter through the back door (the current Sharples back door), this area will be loud and crowded, and will not have the quiet room ambiance that the current design posits it will have.

As construction begins, Roelandt and the other members of the dining services committee will continue working with designers and project managers through the coming years, in meetings and in more town halls in March.

“The new facility will definitely be a big change in the way we work,” said McDougall. “It will give us the opportunity to have even more variety and showcase the culinary talents of our cooks…There will be many changes to how we currently do business but change is good as long as you are prepared for the change and you share the vision and include the the team in the planning process.”