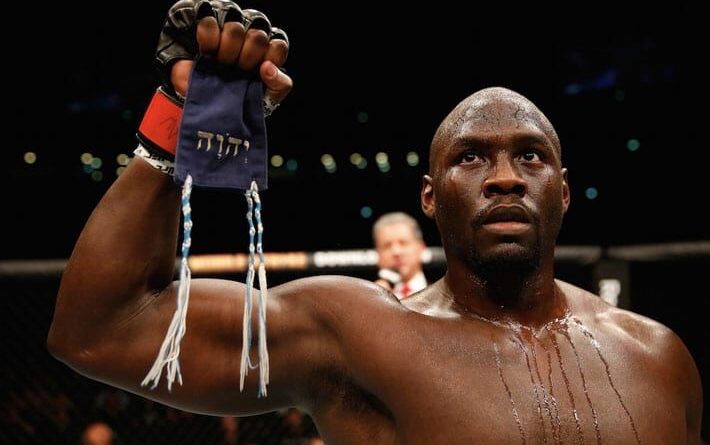 In 2009, in the chilly, volcanic region of Anchorage Alaska, Jared Cannonier, a current middleweight contender in the Ultimate Fighting Championship, was doing maintenance on air traffic control equipment for the Federal Aviation Administration. Cannonier was ready to welcome a new member into his family and had settled into life in Alaska, but was not near professional fighting shape.

A bolting 10 years later, Cannonier weighs in at exactly 185 lbs, after losing over 115 pounds to reach his goal of fighting in the middleweight division. Cannonier stalked the octagon after finishing his opponent, Jack Hermansson, a middleweight contender coming off a 4-win streak. Cannonier won with a second round TKO at UFC Fight Night Copenhagen, held in the Royal Arena.

Cannonier’s first foray into the world of Mixed Martial Arts was through the Army’s combative training. After being discharged, he found refuge in the FAA, allowing him to support his family. He found a jiu-jitsu gym in Anchorage, and soon began competing in Fairbanks. Six impressive performances later, and Cannonier made his UFC debut at heavy weight in 2015. The weight class seemed a natural fit for him: a smooth transition from his previous life.

“I already knew when I was at heavyweight that I wasn’t a natural heavyweight compared to the other guys I’d be competing against,” Cannonier said in an interview with ESPN. “I’m a realist. I’m not living a fantasy. I know what’s what. It was only a matter of time. I knew I had to make that happen.”

His method of fulfilling this realistic approach meant commitment to a stricter diet and his MMA training. Cannonier read between the lines and found himself running at 3:30 a.m., going to work, and ending the day in his jiu-jitsu gym. It also meant a warm home he could go to after the training curtains drew to a close.

After making enough money, Cannonier moved the whole family down to Arizona. He began training at the MMA Lab in Phoenix and achieved his goal of dropping his weight down to light heavyweight. However, he didn’t find the success he was hoping for, coming out of that division with a 2-3 record, before moving down to middle-weight.

His wife, Cat, supplemented his training by taking on the role of nutritionist.

“A lot of these fighters, they have so many people working for them… We didn’t get to have that luxury. We had kids by the time Jared started in on the MMA journey… Lucky for us, the adjustment came as an entire family. We were all kind of into it,” Cat said in the ESPN interview.

Cannonier walked into the Royal Arena with freshly laid footsteps behind him. His transition from former FAA employee to full-time MMA fighter, in such a short time span, reveals the level of commitment that Cannonier has in pursuing his MMA desires leading up to UFC Fight Night Copenhagen.

His opponent Hermansson, standing at 6’1, Swedish born, came into this fight with his head held high. A man with a tireless work ethic, the first in his gym and last one out, and notoriously known for his barraging, thundering ground punches once he takes you to the ground. His unorthodox stand up game and wrestling has the ability to confuse fighters, giving him an element of unpredictability against Cannonier. Counter to traditional chain wrestling, he feeds himself into his opponent’s body and hustles to take their base away. Once taken to the ground, he viciously locks onto his opponent, and strategically looks for a submission. He distracts with punches to the face until he can find a lock around the neck, or find a top position and hammer down fists until his opponent yields.

Cannonier, coming off a two-win fight streak in the middle-weight division, has an equally efficient and technical driven fighting style. He pinpoints the spots on his opponents where he knows he will land a clean shot. Carrying an uncanny amount of power behind his punches, and kicks, as seen in his previous fight against Hall of Famer Anderson Silva, an efficient approach to fighting serves him best in defeating opponents like Hermansson. Mobile fighters with great cardio and attacking from a safe distance.

Sharpened with intent and honest months of training, Cannonier sees this main event as an opportunity to implement all he’s analyzed, learned, and practiced. Composure draining any emotion from his face, Cannonier walks out to “Mann” by Big Moe feat E.S.G. and Big Pokey, while Hermansson walks out to “The Joker” by Damien. A roaring and welcoming crowd makes Cannonier the invading force in this fight.

Number nine ranked in the middle-weight division, Cannonier, goes toe to toe with number-five-ranked Hermansson. Hermansson opens with a series of leg kicks to set up a fight-opening takedown attempt. This was a pivotal moment as this potential takedown could dictate the wrestling pace for the rest of the round. However, after a crucial effort, Cannonier decently escapes. Soon after, Hermansson persists another takedown attempt by precisely timing Cannonier’s kicks. Cannonier kicks and Hermansson grabs the leg and reaches for a two-leg takedown, but settles for a body grab and brilliantly suplexes Cannonier taking his back. Hermansson displays very good positional work by maintaining Cannonier’s back. Cannonier soon scrambles out of them and brings the fight back up to the feet, before Hermansson strategically wraps his arm around his opponent’s arm to take Cannonier down again, all in an effort to unleash his notorious ground and pound. Cannonier’s strength wills him up from the ground and allows him to close the distance, pushing Hermansson to the cage with a stiff right arm and landing an uppercut in the process. For the remainder of the round, Hermansson does a decent job of not winding his leg kicks too much and simply landing them flush on Cannonier’s thigh, while Cannonier looking for opportunities to release the power behind his hands. Cannonier closes the opening round with a sweeping leg kick to the left calf of Hermansson and a stiff jab to the face setting him up in a place of confidence for the second round.

Hermansson opens up the round once again with leg kicks looking for that takedown. However, Cannonier reads this and could almost predict the sweeping two arms reaching for his legs. He cleverly averts, takes a moment to place his hands on his opponent to set up a quick right uppercut. Hermansson falls to the ground and Cannonier pressures him against the cage to deliver vicious ground punches before swiftly ending the fight with a TKO 27 seconds into round two.

And it’s this ruthless effort to push forward with his commitment to the sport that allows him to see Hermansson and only him. Hermansson saw this as an opportunity to position himself in a spot where he can continuously climb up the middle-weight contender ladder and eventually get a shot at the title. But Cannonier saw this as a step in his ever-growing journey from FAA employee to small-time MMA novice, to heavyweight, to light heavyweight, and to middle-weight challenger with moxie.