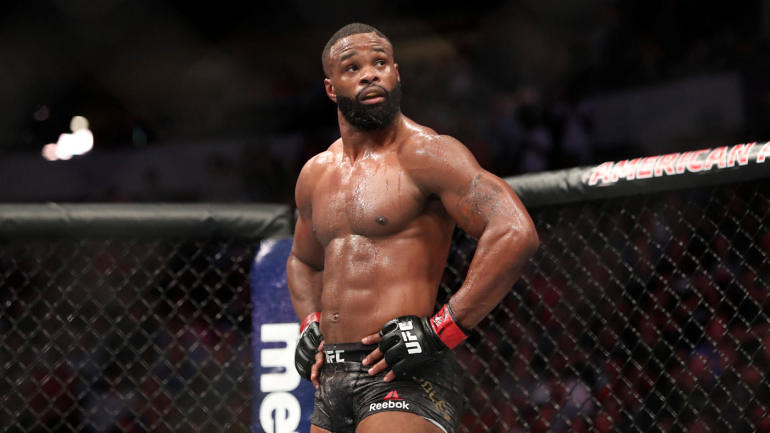 The stage was set for the perfect blood-boiling rivalry between two titans in the welterweight division (170lbs) for UFC Fight Night 178 to reach its climax. After two years of anticipation, on Saturday, September 19, these two combatants had more at stake than just a win at the UFC Apex Arena in Las Vegas, Nevada.

Standing on one side with his back against the steely cool cage was the 5’11” crackerjack wrestler and slack-jawed adversary: Colby ‘Chaos’ Covington.

Covington’s nickname, ‘Chaos’, is deliberate and true to the “Bad Guy” persona he has created for himself. Though this persona keeps him blacklisted among fighters, it has also garnered the attention of the masses.

Since leaving American Top Team in Coconut Creek, Florida, Covington has made a quick home for himself at Mixed Martial Arts Masters, a martial arts school in Miami-Dade County. This was his first fight since leaving the gym at which he had trained for the majority of his career. Many fans speculated that this placed him at a disadvantage since his previous gym houses some of the world’s most elite fighters.

On the opposite edge of the cage was the 5’9” one-punch knockout artist and broadcast analyst: Tyron ‘The Chosen One’ Woodley.

Woodley hails from Ferguson, Missouri; He was dedicated to wrestling from an early age, and was a two time High School All American award recipient while remaining on his school’s honor roll. This talent carried over to his MMA career, where the majority of his wins ended conclusively with ruthless knockouts or submissions, under the guidance of ATT.

His time with Covington at ATT can be summarized by a rant Woodley shared on The MMA Hour.“I talked to Dan Lambert today. I told him that after I whoop his ass I want him off the team. He’s a disgrace to American Top Team, the tradition it was rooted in, he’s a disgrace to the sport and a mockery to the toughest and best division in the UFC’s history, the welterweight division,” Woodley said.

Their animosity for one another stems from Covington’s crusade against Woodley back in 2018. When Covington was still new to the UFC and Woodley was the welterweight champion, Covington claimed that he bested Woodley during training sessions, which Woodley vehemently denies.

“He [Covington] was brought in to help me train for Rory MacDonald and I have never met a lazier piece of shit than Colby Covington…” Woodley said.

Leading up to their bout, during a media appearance with Marc Raimondi, Covington shared a combative response.

“[Tyron] Woodley is a smart man. He brought in ‘The Street Judas’ Masvidal to learn how to lose. Because I’ve been training with Jorge for nine years and I beat his a** every day. He’s a joke. I’m sure he’s training Woodley to learn how to lose and how to get his a** beat by me. That’s all he ever did,” Covington said.

Covington’s response fits his persona well, sprinkling in some extra animosity before their bout.

Their collective time at ATT manifested the bad blood that spices up any kind of fight MMA fans will adore and remember.

Covington’s wrestling style, a slow and grinding strategy of holding the opponent against the cage for much of the fight to win a decision victory, is kryptonite for Woodley’s one-punch knockout preference. In one of Woodley’s last two performances, Kamaru Usman, current reigning champ in the welterweight division, won the championship belt against Woodley using this strong man handling approach and running Woodley to the ground.

It is then no surprise that Woodley was pitted as the underdog. Flash forward to fight night, where Covington carried his wrestling pedigree into the bout. Covington showed a brilliant display of octagon control by applying constant pressure with jabs and kicks. He was able to successfully time Woodley’s punches to take him down to the ground or suppress Woodley against the fence and work the clinch. Covington’s approach allowed him to steer the momentum of the fight by constantly pressuring Woodley against the fence. It was here that he was able to land punches and raze elbows off the clinch separation. Woodley’s more patient strategy of looking for the one-punch knockout opportunity did not work out in his favor. In the final round, while Covington timed Woodley’s right hand and planted Woodley on the mat, Woodley attempted a guillotine, a chokehold using the arms to encircle the opponent’s neck in a manner similar to a guillotine. A moment later, Woodley cried in agony with an apparent rib injury. Despite an unfavorable outcome among fans, all three judges had Covington winning every round, with an especially dominant fourth.

Perhaps the most disappointing outcome of all is the current uncertainty among Woodley’s fans. Woodley is now on a three-fight skid, previously undefeated in seven straight bouts.

In his past two fights, he lost in the same fashion: he didn’t let his hands go. Woodley seemed to accept defeat when he got taken down for the past two fights. While he made an effort to stay off the fence and throw against Covington, he still failed. Where does he go from here?

In an Instagram Live on his way to the hospital, after the bout, Woodley didn’t make excuses for the lost fight but was at a loss for words regarding what went wrong.  “I appreciate you guys – I love you guys … It didn’t go the way I wanted, guys … It happened. [I’ve] got to dust it off … ” Woodley said.

While Woodley’s career is on the line, Covington continues to establish himself as one of the best fighters in the world. And as much as people hate him for his arrogance and imitative trash talking, he knows how to get the job done.