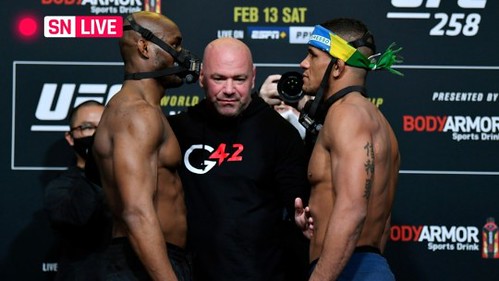 On the night of February 14, the stage was set as fighters lined up for the UFC 258 card at UFC APEX in Las Vegas. Headlining the card was Kamaru “The Nigerian Nightmare” Usman, defending his welterweight belt against Gilbert “Durinho” Burns. Tension between the fighters permeated the empty stadium and fueled the electrifying blows thrown from both sides.

Back in 2011, Usman and his mentor, Hall of Famer Rashad Evans, helped launch a professional team of fighters named the Blackzilians in Boca Raton, Florida, alongside MMA agent Glenn Robinson. One year later, Burns and his mentor, MMA legend Vitor Belfort, joined the team under the guidance of head coach Heenry Hooft, a decorated Dutch kickboxer.

Fast forwarding to 2015, Usman represented the Blackzilians on the reality TV show “The Ultimate Fighter” and went on to win the tournament, earning him a contract with the UFC. In response to a falling out between Robinson and Hooft in 2017, Usman and Burns chose to remain with Hooft to form HKickboxing, which was later rebranded to Sanford MMA in late 2019.

Initially a lightweight contender, Burns made an early decision in his MMA career to move up to the welterweight class. Usman trained with Burns at Sanford MMA on numerous occasions. As time went on, however, it became clear that the two would eventually cross paths. In an interview with ESPN, Evans attributed a portion of the motivations behind Usman’s departure to the egos involved.

“There’s a lot of moves that get made with a selfish point of view in mind without thinking of other people,” said Evans.

The makeup of a fight team is often capricious because of the possibility of clashing intentions between individual teammates. Usman, however, had intended to leave Sanford even before Burns became the number one contender. Usman revealed that he left Sanford while in preparation against Burns to get more individual attention, and that he has felt a lack of attention for some time now.

Usman is one of the most dominant fighters in UFC history. Usman (17-1 MMA, 13-0 UFC) is currently riding a 16-fight winning streak and is undefeated in the UFC. Leading up to the fight, Usman was looking to surpass Hall of Famer George St-Pierre for most consecutive wins (13). Burns, meanwhile, was vying to become the first UFC welterweight champion from Brazil.

Stylistically, this was a stimulating matchup for any MMA fan. Under the tutelage of Hooft, Usman built a very functional stand up game, making him a multi-faceted threat, and a complete mixed martial artist. Primarily, Burns is a grappler, but also an explosive fighter with a short and stout frame. He prefers to stay in neutral ground to get a feel for his opponents before swarming them in bursts, allowing him to avoid counters. Burns is also able to get away with leg kicks with minimal set up because his opponents are usually wary of his explosive over hand right or the threat of a takedown. Usman, however, comes from a strong wrestling background with a focus on utilizing the cage to his advantage. His stand-up involves level changing and feints to close the distance and pressure his opponents against the cage. He uses stiff jabs to set up swinging hooks to the body or overhand rights, while also using his level changing to set up front kicks.

Fast-forward to the night of February 14. Burns rocked Usman twice early in the first round with heavy, quick hands. It immediately became apparent that Burns was not only quicker than Usman, but could consistently feint punches and outpace Usman while retaining octagon control. Burns would blitz in with razing hooks and straights, and follow up with kicks to the head and body; it was a kick to the head that would ultimately stun the “Nigerian Nightmare” at the end of the first round.
In the second round, Usman overcame the early adversity to rally. He continued to use a piston-like jab to create distance, stymying Burns’ short-range power and explosiveness. Burns used inside kicks to set up his punches and close the distance, incorporating a gazelle hook or a swift right uppercut. Usman, however, remained patient to pick his shots and eventually drop Burns.

As the third round settled in, Usman stayed true to his strategy and remained behind his power jab. Like any great striker, he created dynamic opportunities by using his jab with angles and even switching stances, allowing him to land powerfully. It would be the latter that would give Burns trouble. Finally, Usman threw a vicious, unorthodox, stiff jab, and finished Burns on the ground with a barrage of precise punches.

Burns attributed his loss to going “Cody Garbrandt-crazy” after dropping Usman early in the first round; he got overzealous and lost control of the fight. For Usman, this match highlighted some major improvements in his game under the tutelage of his new coach, Trevor Wittman, as well as some new additions to his arsenal. With this victory, Usman is now in conversation alongside some of the legends of the sport.

Editor’s Note: The opinions expressed in this article are solely the author’s and do not reflect the views of The

February 20, 2021 Virginia Moscetti 0
Do NOT follow this link or you will be banned from the site!