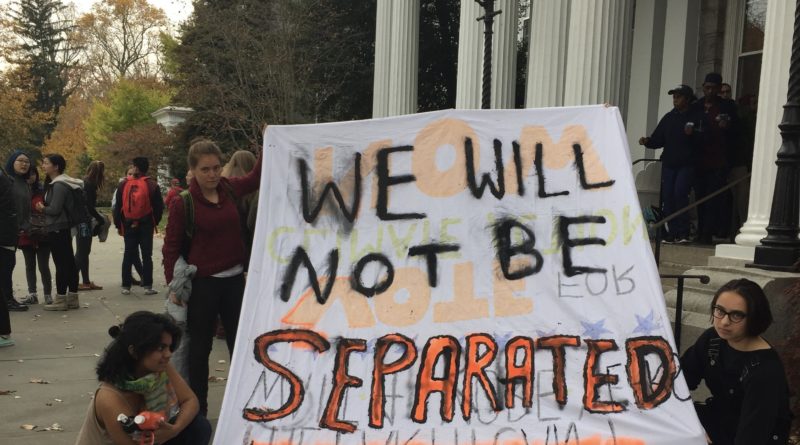 Last Wednesday, hundreds of students stood in front of Parrish building, demanding that Swarthmore declare itself a sanctuary campus for undocumented students. President Smith has already said the College is investigating the possibility.

But what exactly is a sanctuary campus? Below, we have gone through the petition that students distributed, point by point, looking into how feasible each demand is and what the College would have to change to meet it.  (Keep in mind that the petition was based on a template provided by Movimiento Cosecha, so it wasn’t written with Swarthmore in mind specifically; students have added more specific demands since the original petition, but this article considers the original.)

As University of Pennsylvania professor and immigration expert Sarah Paoletti told The Daily Gazette, nobody has fully figured out what a sanctuary campus looks like.

“The details of it and how it’s actually gonna work and play out is something that I don’t think anybody really knows yet, we’re all trying to sort through what that’ll be,” she said.

This article is The Daily Gazette’s attempt to figure it out. Here are the key demands of the petition:

The College has a potent weapon to protect against the government requesting student information: the Family Educational Rights and Privacy Act (FERPA). FERPA prevents colleges from sharing student records without their consent, except in a few narrow cases. As The Atlantic notes, it is generally thought that a student being undocumented is not a sufficient reason to violate the privacy of their records.

“As a private college, we are not at all interested in acting as an agent of any government entity,” International Student Director Jen Gold said.

The petition calls for Swarthmore to refuse voluntary information sharing. There might be types of information that FERPA doesn’t protect and the College might be able to voluntarily share with the government. If Swarthmore refuses that, the federal government could threaten to cut federal funding, which mostly means federal financial aid and loans.

Swarthmore relies on federal funding, but to a lesser extent than many public universities. In the 2015-2016 academic year, federal grants made up 3.5% of Swarthmore’s financial aid in the 2015-2016 academic year. More significantly, a third of the class of 2015 took out federal loans throughout their time at Swarthmore, with an average total of over $17,422 per student. In theory, the federal government could take all that money away if Swarthmore refuses to cooperate with immigration authorities.

ICE could also issue subpoenas and force the college to release information that way. The New York Times has reported that such subpoenas are very rare, but they do happen.

It’s unclear whether Swarthmore can legally do this.

It’s true that some universities, like Columbia, have already said they will ban ICE agents from entering campus without a warrant. But Brown University’s president and provost said they a college cannot legally guarantee such protections.

“Based on consultation with legal counsel, we have come to understand that private universities and colleges do not have such protection to offer legal sanctuary from members of law enforcement or Immigration and Customs Enforcement,” they wrote, adding that “it would be irresponsible to promise protections that we cannot legally deliver.”

The student petition accounts for this problem. To provide legal grounds for a college refusing entry to ICE, it cites an internal ICE memo from 2011. The memo says that ICE officers shouldn’t enforce immigration laws on college campuses and other “sensitive locations” like churches. Crucially, however, the memo still allows officers to enter a sensitive location with special approval from ICE. The Atlantic has reported that his rarely or never happens, but that could change.

Gold, the International Student Director, said she hopes ICE will continue to honor the spirit of the “sensitive locations” policy.

“[W]e would hope and expect that ICE’s established position to respect and hold schools in this higher regard would continue even into the next administration,” she said. “This is something we will be watching closely.”

“I think churches have [been sanctuaries] successfully in that there is the expectation of a political backlash. If you have ICE raiding a church, pulling out somebody from the sanctuary of a church, that politically looks horrible. And I think you could say the same thing about a raid on a college campus,” she said.

So, while Swarthmore may not have the full legal power to deny ICE access, joining other campuses and stating that ICE agents are not welcome might send a potent political message.

When approached on Parrish Beach right after last Wednesday’s protest, Public Safety Director Mike Hill said his office does not have information about students’ immigration status.

When asked about whether PubSafe can choose not to aid ICE in its enforcement activities, Hill said the College is still weighing its options.

“As you know we are still looking into all of the possibilities and ramifications, and our policies are under review. But we are committed to protecting our students, no matter where they are from or what their circumstances are,” he wrote.

According to Equal Opportunity Director Zenobia Hargust, Swarthmore already doesn’t use E-Verify. E-Verify is a widely criticized system that aims to help employers identify undocumented workers. Since some states mandate that employers use E-Verify, it’s possible that the state or federal government might put legal or other pressure on Swarthmore to participate in the system. Thus, even if Swarthmore doesn’t currently use E-Verify, it might still make sense for the college to adopt a stance against it.

As for housing discrimination, representatives of Facilities Management and the Office of Student Engagement said that immigration status plays no role in student, staff, or faculty housing. To reiterate, the fact that several demands were already met is due largely to the fact that organizers used a template to quickly draft the petition.

In one sense, this is an easy demand for the College to satisfy. In a campuswide email, President Smith has already said she is “committed to the safety and security of every member of our community.” So you can consider that vow made.

But at last week’s protest, speakers mentioned a longer list of things they wanted the College to do, like provide legal and financial assistance to undocumented students and make a webpage with resources for undocumented students. It remains to be seen whether the administration will consider those demands as well.