News » After Election, Undocumented Students Brace for the Worst 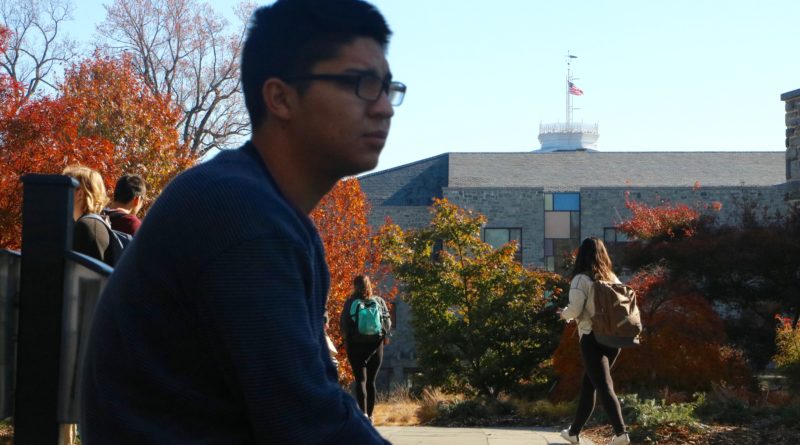 Prior to the election, life had been getting better for Swarthmore’s undocumented students.

Since 2012, President Obama’s DACA (Deferred Action for Childhood Arrivals) program has given most of these students work permits and protection from deportation. The college began treating undocumented applicants as domestic, rather than international, students, increasing their chances of admission. And last spring, undocumented students founded a support and advocacy group, UndocuAlly, with about a dozen members.

Then, Donald Trump, who has promised to “immediately terminate” the DACA program and increase immigration enforcement, won the presidential election.

“This just feels like a slap in the face,” said Miguel Gutierrez Ruiz ‘18 (pictured). He’s undocumented, and one of UndocuAlly’s founders.

His co-founder, Maria Castañeda Soria ‘18, watched the election results while on her study abroad program in Madrid. She stayed awake until 7 a.m, waiting for the results to be certain. Then she went to sleep, still in denial.

“I was expecting to wake up and it would just be gone,” she said.”But it was still there.”

Castañeda Soria and Gutierrez Ruiz have similar stories. Both crossed the U.S.-Mexico border with their mothers, as small children, traversing a desert to join their fathers in America; both failed to cross on their first attempt and spent time in detention centers; and when President Obama introduced the DACA program, both their lives changed. Castañeda Soria finally got her driver’s license. They both obtained work permits.

“It opened up a lot of new doors,” Gutierrez Ruiz said.

Once at Swarthmore, Gutierrez Ruiz declared a major in computer science and hoped to become a software engineer. But his DACA work authorization expires every two years, and if Trump eliminates the program, Gutierrez Ruiz would soon lose the ability to work legally. He said he has little hope of finding an under-the-table tech job.

“I’ve never heard of that, you know?” he said, with a bitter smile. “I’ve never even heard of an undocumented student being in the tech industry.”

For undocumented people, Trump’s impending presidency haunts both their long-term dreams and their short-term plans. Castañeda Soria has a scholarship from the Lang Center to implement an immigrant rights project in Mexico. Under DACA, she’s been able to go there and return legally to the U.S. by getting “advance parole.” Now, she’s unsure if she’ll go next summer. Gutierrez Ruiz had been planning to study in Budapest next fall, but that plan now scares him.

“I’d be scared that I’m gonna go abroad, something’s gonna happen here, and I’m not gonna be able to come back,” he said.

DACA only covers undocumented people below a certain age, who arrived as children. If DACA participants fear that their new-found rights will disappear, most undocumented people in the U.S. never had these rights in the first place. Gutierrez Ruiz said that some of the undocumented students at Swarthmore aren’t in the DACA program; these students were never protected from deportation, and Trump’s election has made that danger more immediate.

“Even if he says, with my status, that it’ll be fine, that it’ll be safe, you can’t trust him. Because from what we’ve seen in the campaign he’s so impulsive,” Castañeda Soria said.

The federal government has a policy of not sharing information about DACA students with Immigration and Customs Enforcement. But with a new administration, that policy could change. Students nationwide now fear that the undocumented among them, whether or not they’re part of DACA, might face governmental harassment or deportation.

On Wednesday, November 16, students at Swarthmore and dozens of colleges will walk out of class, demanding that their campuses declare themselves sanctuaries for undocumented students and other vulnerable groups. Among other things, being a sanctuary campus would mean the college won’t cooperate with authorities if they ask for information about undocumented students.

International Student Director Jennifer Gold, who advises undocumented students, said she thinks the government is unlikely to ask for such cooperation. She routinely provides immigration officials with information on international students who are here on student visas, but the government has never asked her about undocumented students. If they required her to turn over that information, she said, she would consider resigning.

“If I wanted to go into police enforcement, I would have,” Gold said.

Even before the election, undocumented students had already been asking the college for legal and financial support as they work through the immigration bureaucracy. Now that the threat of deportation appears more real to many of them, such support seems more urgent. Gutierrez Ruiz stressed they’ll need support from other students too. He said that if an undocumented student gets detained or faces deportation, he expects students to protest and fight.

For him and other undocumented students, things are about to get harder. But they’ve never been easy.

“It’s alway kinda been hard, so I only see one option and that’s to move forward and keep going,” Gutierrez Ruiz said. “At least there’s, like, optimism in that.”

The Wednesday walkout will happen at noon, and participants will gather on Parrish Beach. The petition calling on Swarthmore to become a sanctuary campus is here.