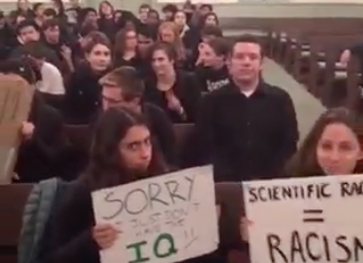 Charles Murray, the W.H. Brady Scholar at the American Enterprise Institute, came to Swarthmore College on November 15th to deliver a talk entitled “Fallout from the Election and What’s Next.” The content of his speech focused on his observations from Coming Apart: the State of White America 1960-2010. However, it was his previous work, notably The Bell Curve, that attracted student protests to the event.

Over 100 people were present for the event, held in the Friends Meeting House at 7.30pm. The event was sponsored by AEI On Campus and the Swarthmore Conservative Society.

“I hope that Charles Murray’s insight […] will help us make some sense of what’s happening in the country,” said Ben Termaat ’18, President of AEI On Campus, in the opening address.

The center of the room was filled with protesters clad in black, who stood up and turned their backs to Murray just as he began his speech.

Murray started by declaring his opposition to Donald Trump’s election, saying that “some part of Donald Trump’s soul is curled up in a fetal position” when faced with the challenge of being the United States’ 45th president. He emphasized the distance between the elite and the white working class as one phenomenon that has led to Trump’s victory.

He spoke of a “new upper class” that was formed via an economic transformation that rewarded a premium to education and intelligence, and a social transformation that saw increasing meritocracy in elite colleges. As an example, he cited his own alma mater, Harvard, as having its incoming freshmen class achieving a mean verbal SAT score of 583 in 1950. This score increased to 687 in 1960, or 1 standard deviation increase in just 8 years.

Additionally, he spoke of a “narrow elite” that numbered only about 100,000, which are heavily centered around Washington D.C., New York City, Los Angeles and San Francisco, representing the political, financial, entertainment and technology hubs in the United States.

The formation of a new upper class is, according to Murray, enhanced by factors such as the much larger size of the economy.  Top professionals, such as lawyers, CEOs, and advertisers could command much higher salaries than ever before, a factor often helped by “intelligence.”

“I’m not saying IQ is everything… IQ is to intellectual occupations like weight is to offensive linemen in the NFL”, Murray said.

At around 7.55pm, the protesting students clad in black walked out of the room. Students previously watching from the sides filled in the middle of the room vacated by the protesters.

Despite the disruption, Murray continued his speech. To emphasize his thesis on a cultural divergence between the elite and mainstream America, he promoted the PBS Newshour Quiz, “Do you live in a bubble?”, inspired by his work. The quiz asks questions such as “Do you know who Jimmie Johnson is?” or “Since leaving school have you worn a uniform?”

The new upper class also had new sensibilities, where racial slurs would usually receive pushback in polite conversation. However, “call somebody a redneck, you will have nobody pushing back at you,” Murray said.

It is the discussion on race that has previously mired Murray in controversy and attracted a lot of questions after his main speech.

The Bell Curve, written by Murray and Charles Herrnstein, was published in 1994 and explored the relationship between IQ and personal outcomes. The book drew a firestorm in particular over its work on racial differences in IQ. Protesters held up signs that included “Racism with a PhD = Still Racism” and “The welfare state saved my family.”

Murray was defensive when fielding questions regarding what he said in the past, often admonishing audience members for not using full quotes. Twice, he requested the student posing questions to come to the lectern and show him specific quotes on their smartphones.

“Why not just say I’m not a racist?” an audience member directly asked Murray.

“I’m not a racist,” Murray snapped back, drawing some laughter.

While the Q&A session often got heated, there were few instances where students deliberately interrupted Murray, but there was no sustained heckling as students on other campuses have done when confronting speakers deemed threatening.

Patrick Holland ‘17, President of the Swarthmore Conservative Society, met with college administrators prior to the event to discuss potential issues.

“While they may not necessarily agree with many of the things Murray has said in the past, they do recognize that college is about exploring ideas and sparking discussions, even if they are controversial,” he wrote in an email.

“It goes beyond disagreement, it’s a matter of a lot of students feeling unsafe and threatened by his presence here. I don’t think hate speech should ever be legitimized by being allowed to ‘be heard’ on campus. ESPECIALLY not now, after years of police brutality and Trump’s election, where the feelings and safety of students of color are already so delicate and in jeopardy,” she wrote.

The college did organize two panels, on Monday and Tuesday, to discuss the Murray lecture and the election in general.

Holland did speak to protest organizers prior to the event to try and placate their concerns, but ultimately decided not to cancel the event. He was heartened by the outcome of the talk, saying, “I’m glad the protesters showed up, I’m also glad they are willing to engage, and I’m also glad that we had a good discussion.”

Mohammad Boozarjomehri ‘19, who attended the event to its conclusion, said “The fact that everyone stood up and left, I thought initially was stupid because they weren’t gonna listen to him and speak. Now thinking about it more, his career, his writings, they speak a lot more about his discourse than tonight does. I think when everyone stood up and left, it was effective in demonstrating our disapproval of this.”

Charles Murray himself was critical of the protest, and of contemporary campus culture in general.

Correction, Nov. 16 9:37 a.m: Some students interrupted Murray, but the fact that there was no sustained heckling as we have seen on other campuses was clarified.