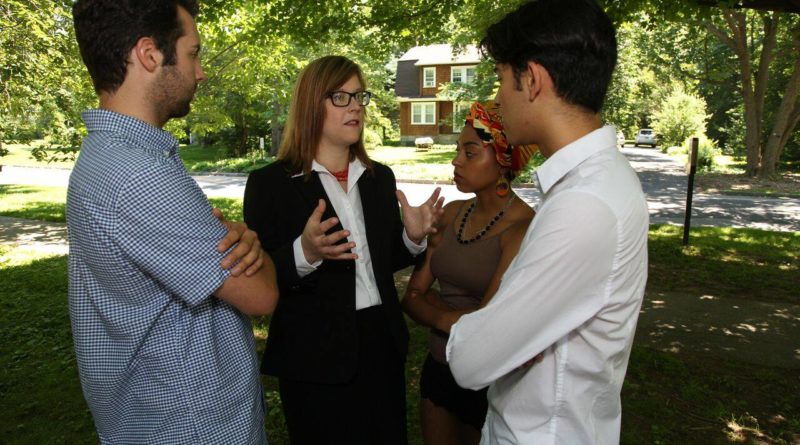 Although it may not seem like it at times, November 8th isn’t just the day our country elects the next president. It’s also the day when we elect our state and local leaders.  Although these smaller races run under the radar for many of us, they impact our lives just as much as, if not more than, the current national campaigns.

Last week, the Daily Gazette sat down with our local State Representative, Leanne Krueger-Braneky, to talk about her election, background, and vision for Pennsylvania.

Krueger-Braneky, a Democrat, is new to the State House in Harrisburg. She won her seat as the result of a summer special election in 2015 after initially losing to Republican Joe Hackett in 2014. She likes to characterize herself as a progressive warrior fighting for the environment, women, and workers. Like many progressive Democrats, Krueger-Braneky was energized by Bernie Sanders’ candidacy for president and excited that it nudged the party’s platform to the left.

Krueger-Braneky’s background only supports her sterling progressive credentials. Serving as the first Executive Director of the Sustainable Business Network of Greater Philadelphia and Senior Director of Strategy and Development at the Business Alliance for Local Living Economies, she worked to help local businesses by pushing for environmentally sustainable development policy.

Since arriving in Harrisburg last year, Krueger-Braneky has continued to focus much of her effort on environmental policy. She is currently pushing for stricter regulations on fracking and an extraction tax, both major sources of political conflict. As Krueger-Braneky sees it, the process of reform is proving difficult because of the incredible strength of the fossil fuel industry in Pennsylvania. “Our environmental regulations are literally being written by the lobbyists for oil and gas companies,” she said. While Krueger-Braneky isn’t hopeful about the prospects of stricter regulation in the short term, she does see hope on the horizon.

To Krueger-Braneky, the divestment movement at Swarthmore is exactly the sort of activism that can force the fossil fuel industry to stop campaigning for the freedom to frack. As she put it, “All of us have a responsibility to take action where we can.” On Wednesday, Krueger-Braneky followed up her support for Swarthmore’s divestment movement by calling on the Pennsylvania State Employee Retirement System to divest from Energy Transfer Partners, the firm controversially building pipelines on Native American land in North Dakota.

Krueger-Braneky’s progressive roots are even clearer when she’s talking about issues that affect women. In Harrisburg, she is a consistent defender of a right to abortion and this election cycle, she has already been endorsed by Planned Parenthood and is one of five state level candidates Emily’s List has chosen to endorse in Pennsylvania. In addition to her legislative work on behalf of women, Krueger-Braneky says that she is constantly trying to recruit women to run for office, noting that the Pennsylvania’s share of women in the legislature is lower than the same total in Afghanistan. “I think until our legislature actually reflects the demographics of our community and our state that there’s tremendous work to do.”

Recently Krueger-Braneky has begun focusing on one of the biggest new challenges to Delaware County, the increase in opioid overdoses. While prescription drug abuse has increased substantially throughout the country in the past two decades, people are only now beginning to recognize its full cost. Between 2014 and 2015, overdose deaths increased by 23 percent in Pennsylvania, hitting the area surrounding Swarthmore harder than most others.

Last spring, Krueger-Braneky, along with Governor Tom Wolf, hosted a roundtable to discuss potential solutions to this crisis. Legislation is currently a work in process and Krueger-Braneky believes that there is no single solution. “We need to address [the issue] with better regulation, sober living facilities. I think we need to address it with more funding, with more support for folks who are picked up by police departments and are desperate for treatment services, and I think we’ve got a responsibility to support families all along the way,” she said.

State politics, of course, is still connected to national politics. Krueger-Braneky’s name will be on the ballot alongside Katie McGinty’s and Hillary Clinton’s. When asked if she disagreed with Hillary Clinton on any issue, she responded that, while she views herself as an independent candidate, “nothing comes to mind.” Krueger-Braneky refused to name any disagreements in our interview, but some policy rifts do exist between Krueger-Braneky and Clinton. For instance, Clinton does not advocate decriminalizing marijuana while Krueger-Braneky does and Clinton is much less aggressive in her support of environmental protections. Regardless, Krueger-Braneky likely hopes those Swarthmore students that support Clinton will see a similar candidate in her.

While Election Day is a massive event at the national level, it’s important not to forget about its significance at the local level. The outcome of Krueger-Braneky’s election could very well impact Swarthmore students just as much as the results of the presidential election and, unlike the presidential race, one vote might actually decide the winner.

Last year Krueger-Braneky won her election by less than 500 votes. This year the margin could be even smaller.