News » US Politics is a Lottery: A Profile of Rick Hasen 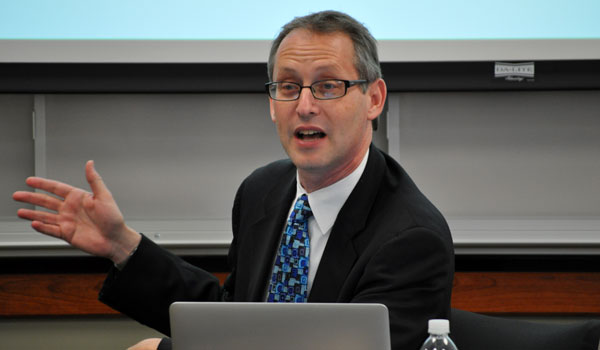 Rick Hasen, American lawyer and the Chancellor’s Professor of Law at University of California, Irvine, delivered Swarthmore’s annual Political Science Gilbert Lecture discussing campaign finance reform.  Before he gave his Gilbert Lecture, I had the pleasure of sitting down with him.

Hasen has always had a love of politics. For an essay contest in the third grade, Hasen wrote about the qualities we should seek in a president.  He ended the essay by concluding, “That man is George McGovern. He should win.” The school asked Hasen to change this last line because it was too overtly political.

As a self proclaimed “political junkie,” Hasen’s elementary school essay was only the beginning.  Hasen is now a Chancellor’s Professor of Law at the University of California, Irvine. Perhaps the greatest sign of Hasen’s political authority is the little blue check next to his name on Twitter, which he received recently, much to his kids’ excitement.

Hasen has written several books, including his latest publication, Plutocrats United: Campaign Money, the Supreme Court, and the Distortion of American Elections. The 2010 Supreme Court case, Citizens United, which held that corporations had the right to spend unlimited money on campaigns under the First Amendment, largely spurred Plutocrats United.

Hasen’s latest work is primarily concerned with big money in politics. “Those with wealth get to set the agenda,” Hasen explained. Some money is important, even necessary, to get candidates’ messages out and to inform voters of the issues. However, extreme wealth skews the process and tips the scales in favor of the top one tenth of one percent, according to Hansen.

Hasen stressed that the presence of money alone in politics does not cause corruption. Some money is important for relaying information and a campaign’s message to voters.  Hasen said, “It doesn’t mean that money buys elections. It doesn’t mean that whoever spends the most money wins.” Yet, he emphasized that large donors have more of an opportunity to influence elections than the average voter.

Hasen analogizes our current system to a lottery. “We give the wealthy extra chances, extra tickets to the lottery. And, we let corporations, even though they can’t vote, buy lottery tickets and try to influence [the election],” he said. Therefore, the wealthy decide who is a viable candidate.

Big money also alters policy decisions. There are silent, unspoken threats, as Hasen elucidates. He used the example of major Republican backer, Sheldon Adelson, who gave between 98 and 150 millions dollars in the 2012 elections. Adelson makes a good portion of his money from casinos.

“Anyone who supports internet gaming in Congress knows that if they come out in favor of that, they run the potential risk of Adelson running a candidate against them […] and so that serves as a deterrent effect, even if he doesn’t spend a penny.”

When asked if it is possible to be an elected official and not succumb to this type of influence, Hasen explained that while there are many Democrats and Republicans who, in his words, “try and do their best,” they can only do so much. Money gains people access to politicians who have limited time. As a result, when an inordinate amount of time is spent listening to the problems and requests of the wealthy, priorities tend to skew that way.

Hasen has several proposals and solutions to correcting our broken campaign finance system.  His main plan is to institute a public financing system in which each person would receive $100 worth of campaign vouchers every two years that they could distribute to candidates, political parties, or interest groups. “I think, especially if you can use your iPhone to send money to a candidate– free money basically– I think it could get more people politically interested, politically involved, and also moderate our politics,” said Hansen.  Furthermore, vouchers would help to even the playing field and encourage political participation.  A system of vouchers plus a $25,000 limit per election per candidate is the plan that Hasen advances.

The Supreme Court also plays a vital role in Hasen’s vision of campaign finance reform. He believes that this is the moment that real change can occur, not only because of Scalia’s open seat but also the several vacancies that are likely in the next 4-8 years. The ideological control of the Supreme Court is at stake.

“If we end up with a Hillary Clinton presidency, then most likely we will end up with a Supreme Court that is more willing to tolerate limits on money and politics and more protective with voting rights,” Hasen explained.

However, Hasen voiced fears that Hillary Clinton’s promises to reform campaign finance are hollow.  Hasen said, “I think she is a lot like Obama; she talks the talk, but I think she is perfectly fine with the system we have.”

Hasen believes a Trump presidency is a wild card but thinks, more than likely, Trump would add several new conservative justices to the Court. Not only would these likely nominations set back the likelihood of campaign finance reform, but they also would affect issues such as abortion, rights of criminal defendants, and environmental protection.

For Hasen, campaign financing is the issue of all issues. If we do not reduce the influence of the wealthiest donors, the country’s economic inequality will soon fully transform into political inequality. At this point, we will truly be Plutocrats United (or at least a few of us).

Photo courtesy of University of California, Irvine School of Law