Shelby Billups ’20 is a senior majoring in psychology with a cognitive science minor. On campus, she is a researcher for the psychology department. Her current work is a thesis that focuses on how intersectional identity labels can affect people’s assessment and understanding of various social groupings. Much of Billups’ talent is also channeled onto the stage as she sings with Mixed Company, in chorus, with the Garnet singers, and more. Billups talked about these artistic performances in a nonchalant, humble manner, but it became clear that she is an impassioned performer who is inspired by the work that she does.

“I sometimes sing with the jazz band, and I’m also a classical voice student. I’m actually doing a classical voice and jazz recital with Omar Camps-Kamrin ’20. And in April, I will also do a little bit of theater. So right now I’m going to be part of the stage for a reading of Lali Pizarro’s ’20 and Camps-Kamrin’s children’s musical that they got a grant to write this past summer. Last semester, I [also played the role of] Cassandra in the opera “Cassandra,” and the semester before that, I was a part of the 24-hour production of “The Bald Soprano.”

“I remember in high school there was a project, and we were supposed to discover ourselves in one word and then create a whole project about ourselves around that and I chose ‘performer.’  I think that word still sort of sticks with me. That’s just one of my favorite things to do. Like, sing music, write music, act … and also research. I never thought of myself as somebody who would be like, ‘oh, yeah, let me do some research, that’s fun for me,’ but I just sort of fell in love with it; I think there’s something so gorgeous about coming up with an idea and then getting to the bottom of it, especially if it’s an idea that you think could have a larger-scale impact. I’m hoping with my thesis, we may get something really interesting out of its [application].”

From the eastern shore of Maryland, Billups attended predominantly white institutions her whole life. The experience of being one of the only Black students was exacerbated by Billups’ involvement in the theatre — an even whiter space where she was often the only Black performer. Because of these reasons, her conversations about Blackness were limited.

At Swarthmore, Billups gained a wider view of what her own and others’ Blackness could and did look like. She saw the ways that Blackness was expressed in academic, extracurricular spaces, as well as the areas between them. For Billups, however, coming to terms with Black expression also meant reconciling a past in which her ability to express Blackness was suppressed by the spaces she moved in.

“I didn’t really get any experiences [or a tangible] example of [Black] excellence. So, excellence wasn’t really on my radar, because I didn’t really try to think of Blackness because it wasn’t always advantageous … ignoring Blackness was a means of self-preservation,” said Billups. “And I think that as I got older and started to be more comfortable with it … especially coming here and just seeing so many Black people here who are confident in their Blackness who are loud and proud about it … I felt like an outsider so that was a bit hard to grapple with.”

Attending Swarthmore allowed Billups to develop her consciousness of Black excellence in an environment that was populated with more Black people achieving and following their various passions.

“I think the definition [of Black excellence] changed for me, especially when I got to Swarthmore because, I actually was like, ‘what is Blackness? What does it mean to me? What am I going to do with it?’”

For Billups, Black excellence is about going after your goals and dreams in spite of living in a world that is anti-Black. In many ways, Swarthmore afforded Billups a new avenue for exploration.

“I’ve had opportunities to sort of lean into my Blackness as a student at Swarthmore. For example, the Rev Fest started by Emma Morgan-Bennett ’20 — not this past year, but the year before that — was a People of Color Arts Festival. And I think what was so amazing about that is that it created this space where artists of color could sort of lean into aspects of their culture and in a space that they typically wouldn’t be able to.”

Additionally, Billups has been able to engage Black scholarship and topics in relation to Blackness in her history and psychology courses, as well as her research. Billups feels that her journey from a highschool student to now was fueled in part by this exploration the Black excellence programming celebrating the 50th anniversary of the Black Cultural Center and Black Studies Program has been important in this.

“The school is having a year dedicated to Black excellence. I think it’s also really amazing because I’m imagining myself coming in as a [first year], and just to have a whole year where they’re highlighting the pros of Blackness … when I was raised in an environment where it seems like the cons were just so prominent”

Although Billups greatly appreciates the events, she also recognizes the importance of remembering the history by not glorifying it. Billups remembered the event where she began to  question her previous evaluation of Swarthmore as a progressive and ideal institution.

“It wasn’t really until last semester when in Professor Dorsey’s African American history course … the president of Spelman College [Mary Schmidt Campbell, a Swarthmore alum] came to visit and talked about her experiences [that I started thinking differently].”

Campbell ’69 recounted the problematic rhetoric generally used at Swarthmore, the administration’s mischaracterizations of student protests at the time, as well as a specific instance when a professor discredited Campbell’s emotions after MLK’s assassination among other things. Being in company with Campbell gave Billups a glimpse of past experiences, and persistent truths about being a Black student in a predominantly white institution. Billups began to recall instances today, in the greater world, but also at Swarthmore, where she had similar reflections as Campbell. Billups thought about her own previous presumptions about the college.

“I think that for a long time, I really came in with this very idealized vision of Swarthmore being like the perfect, Quaker institution … But then hearing stories about how, you know this is not very right … I always idealized this place as an integrated utopia, [but] it really wasn’t that all the time.”

Billups felt that the class with Campbell, as well as other conversations she has had, illuminated facts about the history of the Black Cultural Center, Black student protests and sit-ins here that she would not have otherwise known about.

“I think learning history highlights how far the community of Swarthmore has come … It was not perfect, it was not the perfect sort of utopia as I thought coming here.”

Billups takes a nuanced approach to the discussion on institutional progress and reflection.

“I think that we [need to also have space] to inform people of the darker pasts and things like that. I think that space should be opened up more. Because to only acknowledge the nice parts that make the school look good does a disservice to the history as a whole. You’re only telling a half truth … Swarthmore has grown but they need to acknowledge the sort of lower places that they started at.”

In regards to the programming celebrating Black excellence this year, while the celebration was a good start, Billups believes that there needs to be extended intent and action to uplift Black students and Black alums of Swarthmore and Blackness more generally.

“It doesn’t actually have to be as lavish as they had the whole plan for the whole year (this year), but making sure that this isn’t a one and done sort of thing and that students feel supported in every way shape or form consistently. [It is also important to highlight] the achievements of students and alumni. Not only just for a year, but it being a continual thing and not just something that’s thrown out on the BCC listserv, but something that the whole campus looks at [and sees] all these examples of Black excellence.”

Representation seems to be an essential piece of the puzzle for Billups. She admitted that although she never had a Black female teacher until her first year Swarthmore — which was a big improvement for her — she would also not have another one again until her senior fall. It is in these classes, with Black professors, discussing Blackness, that transformed her. While it is, and has been, amazing for Billups to be around so many passionate Black people, and she wants to continue to engage what it means to be a Black student on this campus, she will be graduating shortly. Imagining herself as an alum looking back, Billups hopes that in the future there are more Black people in the arts at Swarthmore and acknowledged the constraints Black actors have in particular.

“I’d love to see more Black people in the arts …They do their best to bring all types of students here. But, I feel like I don’t see that many like Black students in plays and things like that … I was the only Black person in the room so I’d love to see more faces on the stage.”

Billups reflected that, like many Black performers, this kind of situation of minimal representation is something that has carried over from her past experiences. Being Black in the theatre space could and has prohibited Black folks from portraying certain characters or portraying those characters without caveat or disclaimer.

“For example, I’d love to be Elphaba in ‘Wicked,’ but you know, I’d want to be an Elphaba. I wouldn’t want to be like the Black Elphaba. So, I think that’s something I would love to see: more Black faces on the stage or in the arts.”

My last question for Billups was about how she would describe herself. What do we take away from the obviously introspective Shelby Billups?

“I think [I’m a] ‘performer’ in every sense of the word. Singer, drama queen, [and] proud drama queen. Someone who loves to solve a problem in whatever way shape or form that is … I’m definitely a comedian. I love a good joke. And I just love to brighten up the space as well as I can, I think. Definitely a big smiler. I think those are ways to describe myself. But yeah, I think I’m curious, and I feel like I have a lot of questions about a lot of things. I feel like I usually go with like a performer researcher and then I’m like [these other things too].” 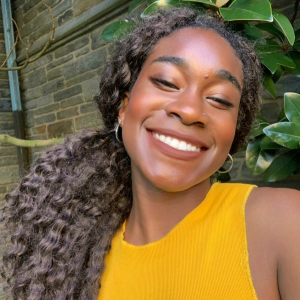