The number of Swarthmore seniors graduating with degrees in English has dropped significantly over the last several decades, while a growing number of students are choosing to major in STEM disciplines, particularly computer science.

In 1992, 62 Swarthmore seniors, nearly 17 percent of the graduating class, left campus with degrees in English literature; now, almost thirty years later, that number will fall below twenty. In 2021, English majors made up only 5 percent of the total graduating class — a decline of more than 10 percentage points over the last three decades according to the college’s data.

It’s really hard to disentangle,” said Professor Eric Song, who chairs Swarthmore’s English Department, in an interview with The Phoenix. “The big narrative is that at the national level there has been a strong emphasis on STEM education as being the way to train for gainful employment.”

The trend isn’t isolated to Swarthmore or even elite liberal arts colleges; it’s reflective of a migration that’s been playing out nationally. Increasingly, students are walking out of humanities classes and into computer labs, engineering classrooms, and social science lecture halls. According to statistics from the National Center for Education, English majors have declined more than 25.5 percent nationally since the great recession.

Institutional data collected by the college between 2004 and 2012 shows that a significant number of incoming freshmen actually planned to major in the humanities but shifted to studying social sciences by the time they graduated. In contrast, very few anticipated majors in other disciplines decided to transition to a major in one of Swarthmore’s humanities divisions.

Within that same period, 352 anticipated English majors changed their minds on campus and graduated with a degree in a social science discipline — the second largest migration of any major group — according to the data. The first largest shift was students considering interdisciplinary majors switching to social science fields. 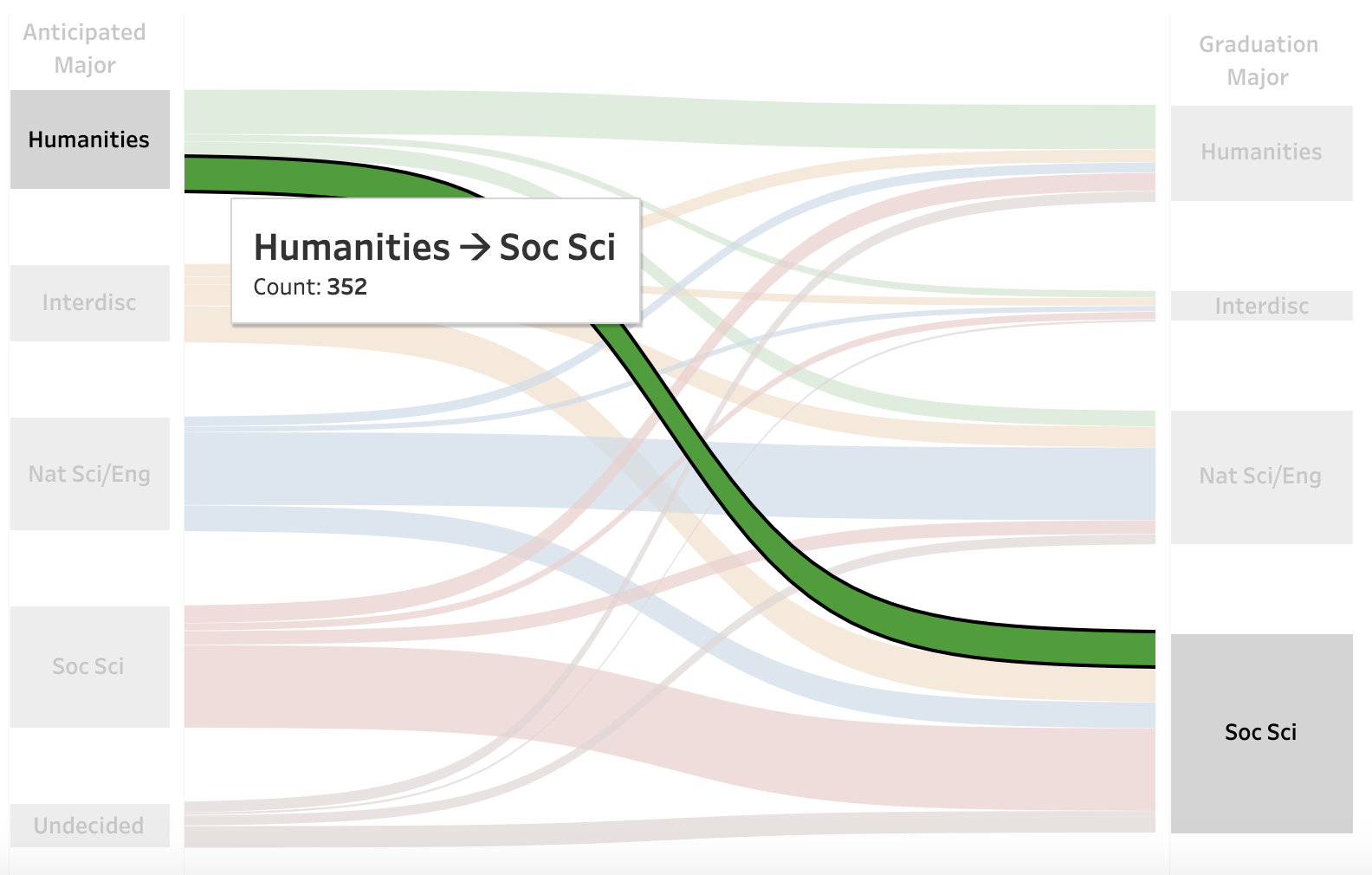 Data collected by the college between 2004-2012 shows that many anticipated humanities majors graduate with social science degrees while few intended majors in other fields shift to the humanities during their time on campus. [1]

Song describes the study of English at Swarthmore as “looking at a complex interaction between forms of cultural expression and imagination and historical realities.”

He added that he thinks the discipline has evolved since his undergraduate years at Pomona College from an emphasis on close reading to a curriculum that integrates more critical theory and analysis. But some students are questioning the value of those skills and how they fit in with post-college plans and career goals.

According to Song, a lot of English majors he knows are choosing to double major in computer science or another STEM discipline, a trend he believes is linked to securing well-paid employment post-college.

“I’ve seen and talked to students who are double majoring in English and computer science so they tell me things like ‘I have a job lined up in programming or something like that,’” he said.

“I’ve always been interested in fiction, read a lot, but computer science came about as a career necessity,” he said. “It seems kind of scary to go into the job market with only an English degree — I’ve seen the kind of jobs that English majors get versus tech majors and it’s a really stark difference in terms of prestige and salary.”

Professor Anthony Foy, an associate professor of English and Black studies at the college, thinks the decline is part of a larger cultural assault on the value of an education in the humanities.

“It boils down to the dismissal of things like literary study as impractical and unproductive in a utilitarian sense since it can seem less clear how literary study cultivates expertise in meaningful content, skills, and the application of knowledge,” he said.

Foy thinks that admissions practices designed to cultivate more economic diversity — which he supports — may also play a role in driving declining interest in the English major.

According to a graphic shared by the college’s official Instagram account, nearly 23 percent of students enrolled in 2020 were considered first-generation, a significant increase since 2013.

“I know anecdotally that first-gen and low-income students often feel enormous pressure to pursue professional career paths that seem to offer more financially secure futures, and these tend to be supported by more legible majors in the social sciences as well as STEM fields,” he said.

“I love to write and you get a lot of opportunities to write in English classes,” she said in an interview with The Phoenix. “I considered the fact that I don’t know if I’ll be employable after college but there wasn’t another major that I thought would translate into a job that I would enjoy.”

Smart described how her dad, an engineer who grew up in a working-class family, initially expressed concerns about her chosen field of study.

“Growing up for him, it was like you had to major in something that would be a job, but my mom was always a big liberal arts proponent,” she said.

Smart is thinking about pursuing a Master’s Degree in English after graduation with the hope of eventually landing a career in journalism or another writing-related profession.

Asked if she knew of anyone in the department that wasn’t double majoring, Smart paused for a moment. “No, I don’t know any,” she said, laughing. “There are definitely people I’ve talked to who said, ‘my parents said I couldn’t just be an English major, there’s definitely lots of concern.’”

Song isn’t sure what’s driving the migration of humanities majors to social science majors at Swarthmore, but he cautions against making assumptions about the relationship between one’s major and eventual career.

“It’s not actually true that if you major in STEM across the board you get a good job out of college or a well-paying job,” he said.

Foy suggested that the problem may begin long before students step foot on campus.

“I’m not sure we can address this question fully without considering how K-12 students are trained to think about English and literature prior to college, especially in relation to Bush-era reforms that have established widespread testing regimes and growing emphasis on and increasing resources and funding for STEM education,” he said.

Schrader has several job offers with software companies for next year. Although he enjoys talking about books, he doesn’t think that studying English has given him many substantive skills in his intended career.

“I use it as a selling point to employers because a lot of employers focus a lot on written communication these days, so I say that I’m an English major, but English doesn’t really help you with that, it’s more about reading,” he said.

For her part, Smart feels the skills that the humanities teach are undervalued.

“There’s such a concern with humanities being unemployable, which is really sad because humanities have so many tangible and real-life skills,” she said.

Confronted with an alarming national drop in demand for English degrees, many departments are being forced to respond to an evolving set of student priorities. At Swarthmore, Song said that these patterns are a significant consideration for the department.

“The question of what we want to offer in our discipline as well as what students might get from it is a constant negotiation, we have to adapt,” he said.

Sadie Smart is a staff writer and contributor for The Phoenix but was not involved with the writing of this article.
[1] https://www.swarthmore.edu/institutional-research/majors