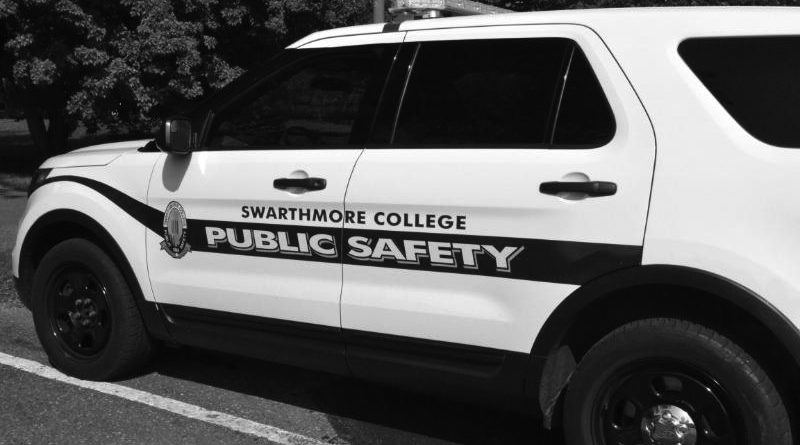 On October 1st, the Public Safety released the Annual Fire Safety and Security Report, as required by the Clery Act, which provides information and statistics about crimes reported on college campuses. The report details data for crimes that happen on Swarthmore’s campus. The report was updated with minor changes to the data on October 3. The report also includes data on hate crimes and Violence Against Women Act crimes.

Swat Team Manager Rose Ridder ’20 believes that the trend of rising referrals and falling arrests for alcohol-related offenses is a positive change since referrals for students serve as preventative measures and have less serious consequences than arrests.

“Seeing [referrals] go up and arrests go down to me is a positive thing,” Ridder said. “[Referrals] are a much less terrifying and serious mark compared to an arrest … Referrals are more of an early intervention measure,” she said.

The report also documents sex offenses that are reported to Public Safety.

Clery reports for sex offenses, which the Clery Act specifies as rape, fondling, incest, or statutory rape, fell in 2018, although this figure likely does not reflect the actual number of sex offenses on Swarthmore’s offenses, because sex offenses are typically underreported crimes. In 2018, there were six reported rapes and three reported instances of fondling, down from ten and eleven instances, respectively, in the year prior. There were no reported instances of incest or statutory rape in 2018.

These figures do not necessarily represent the actual number of sex offenses that happened on campus in 2018. Sex crimes often go unreported. Further, when the Title IX office receives an initial report, they do not ask for additional information, such as the location, unless the student provides it. If the survivor does not specify a location and does not file a formal complaint, then that Title IX report would not go into the Clery Act, because it is not known where the offense took place.

“When someone reports something to me I do not need the full narrative about what occurred — my focus is their well-being. I do not ask in that initial conversation about the who, what, where, when, and why unless the person is offering that information of their own free will,” said Director of Title IX Bindu Jayne.

“Title IX reports are often provided without complete information, including the location of the incident. Therefore, there are certainly situations where [if] I had information about where it occurred, they would have also been Clery reports.”

Jayne also noted the importance of prevention education — education provided to students about gender-based violence — and its impact on the number of reported sex offenses.

In addition to alcohol violations and sex offenses, the report also reflects that there were two referrals for illegal weapons possessions. According to Director of Public Safety Mike Hill, both instances were reports made by college employees to Public Safety.

There were no burglaries or hate crimes reported to Public Safety in 2018.

The report was also updated to reflect changes to previous years’ data. An instance of arson in 2016 was removed from the report after Public Safety deemed that the incident did not actually constitute arson.

“Further review of the analysis indicated that the incident did not rise to the level of an arson. The definition of arson is, ‘… any willful or malicious burning or attempt to burn, with or without intent to defraud, a dwelling house, public building, motor vehicle or aircraft, personal property of another, etc.’ I seem to recall that … a group of students set a … shirt on fire,” Hill said.

The Annual Fire Safety and Security report comes out at the end of September each year.