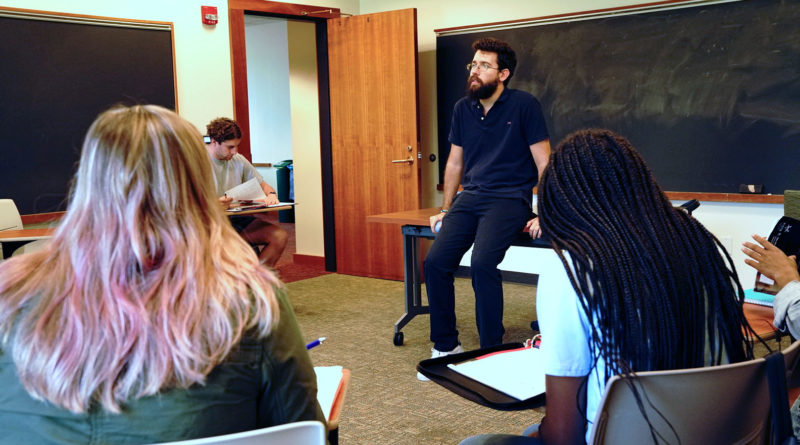 On May 17, 2019, the college Council on Educational Policy put up to a faculty vote a proposition to turn Spanish into its own department, independent of the department of modern languages and literature. In a decision with 96% in favor, the resolution was approved and the department of Spanish was formally created. This moment was a culmination of an almost decade-long project that involved professors and administrators from what is now the Spanish Department, the Department of Modern Languages and Literatures, and all across the college.

“It was an organic transformation,” said Spanish Professor María-Luisa Guardiola, former chair of what was at the time the Spanish section of ML&L.

According to Guardiola and Professor Luciano Martínez, current chair of the department, the motion to become an independent department was an initiative to make the structure of the department more true to how it operates, more representative of how it is commonly perceived, and more aligned with its core mission.

As the Spanish program grew in recent years, running the program involved increasingly more work for the faculty.

“Things started really accelerating in the last five or six years,” said Martínez. “Spanish was becoming too big, the section head was almost doing the work of a department chair. So after a period of discussions and debate we decided splitting was the best path forward.”

In the initial stages, ML&L and the Spanish section approached the CEP seeking advice and assistance. Both the department and the CEP suggested some possible scenarios for how to move forward.

“One of the main planks of [ML&L]’s argument was that Spanish really should be its own department,” said Professor Vollmer, a member of CEP.

According to Martínez and Guardiola, Spanish education is diverse in terms of levels of study, areas of study, types of students, and student goals. Thus, a rigorous, quality Spanish program must offer many different modes of study in order to be as comprehensive as possible.

The department serves students of a wide litany of levels and backgrounds. While some students enter with no prior Spanish knowledge, others have some experience with it as a second language, and some speak it from birth as a heritage language. As a result, the Spanish program’s curriculum consists of three tiers: language courses, introductory writing and literature courses, and advanced courses and seminars.

During the process of becoming an independent department, Spanish changed the way it teaches introductory courses in order to maximize efficiency and efficacy. They hired two new Spanish instructors, Eduardo Martín Macho and Beatriz Ramírez Canosa. The first four class levels of Spanish, now taught by Martín Macho and Ramírez Canosa, meet fewer times a week than under the previous system that required students to attend two classes and three drills a week. Elementary Spanish and Spanish for Advanced Beginners now have two classes and two drills a week, while Intermediate Spanish and Advanced Spanish now have two classes and one drill a week.

When Provost Sarah Willie-LeBreton became provost in 2018, she inherited the complications of the Spanish program. She had more conversations with ML&L and Spanish, and the Spanish section proposed their own solution — the split.

According to Willie-LeBreton, there are several factors that might go into consideration when a section or a program debates making a bid to become a department. If the number of majors and minors in a section is rising or is consistently healthy, if the section has two or more tenured members, or if a section has a very clearly defined departmental mission, it could be a sign that it is time to look into becoming an independent department. Willie-LeBreton said Spanish had all these factors.

The process of becoming an independent department led Spanish to rethink the way in which they offer classes and run their program. The challenge of forming a new department would be the need for more resources in the form of additional support staff, faculty, language instructors, and more. All of which require large amounts of funding. But the Spanish department took a different approach that allowed them to circumvent this issue.

“We had to go through external evaluations and do self evaluations to figure out how to reorganize our curriculum,” said Professor Guardiola. “Our evaluations showed that maybe we should change the language program that we offer, bring it up to date. So we updated, and we brought our language curriculum to national standards.”

“Language classes are now taught by people specifically trained to teach Spanish as a second language, which makes it more efficient,” said Guardiola. “And it made it possible for the other professors to offer more classes that are within their specialty, to expand our curriculum with more diverse courses.”

This restructuring of teaching positions to allow for professors to teach more higher-level classes is reflective of a paradigm shift from Spanish being a foreign language, to Spanish being the second language of the United States.

Armed with their new curriculum proposal, Spanish brought it back to the CEP.

“The proposal took into account everything CEP could have hoped for,” said Willie-LeBreton. “So CEP brought this recommendation to the entire faculty, the entire faculty voted on it and it passed overwhelmingly.”

Professor Vollmer, along with the rest of the CEP, was supportive of the solution that the Spanish department had proposed.

“They saw their problem and they solved it themselves, in a way that was innovative, forward thinking and student-centered,” she Professor Vollmer. “Spanish always had the momentum, and they finally ended up settling on a plan that was brilliant. It wasn’t just a band-aid fix. It was thoughtful, it was student-centered, and sensitive to board of managers.”

Willie-LeBretton sees this change as symbolically important in the context of the broader culture of the college and the country as a whole.

“It signifies something different to have a Spanish department rather than a Spanish program, something weightier,” she said. “This is not to say that the programs and sections we have are not important. But it is a bit of a reckoning with our present. The United States has been so slow to recognize the centrality of Hispanic and Latinx culture within its borders, to recognize the fact that Spanish is the second language of this country, and to recognize the fact that our economies and our relationships with Mexico and Spanish-speaking Carribean and Latin American peoples are central to our identity, so it’s really nice when in our little corner of the world we can say we have elevated the Spanish program to a Spanish department — because our heads are not in the ground, and we appreciate 21st century culture.”