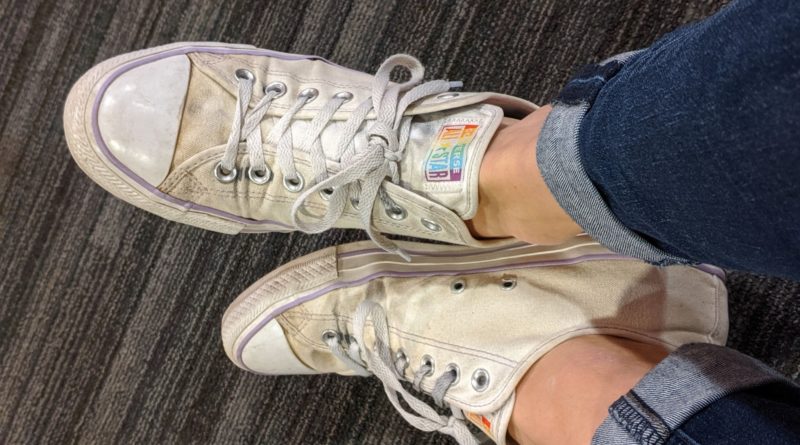 Truth can be found in the most unassuming places. As a disoriented first year, I wanted to learn more about the Swarthmore party scene, and maybe do a freshman perspective piece about it. Thinking about riffing on it — all alone with my opinions — for a couple pages, though, made me more sweaty and nervous than confronting a Sharples pasta bar line that extends back to the staircase.

But one fateful Tuesday night, as I was staring at the ink-stained shoelaces of my Converse High Tops, one of our very own Campus Journal editors mentioned a series of articles about people’s party shoes published a few years back. Immediately I was excited, but also terrified.

What kind of legacy would I be scrambling to uphold?  Would I be worthy of this delicate field of shoe-journalism?

After reading one of the articles by Giorgia Piantanida ’20, I realized the true elegance of the concept. While unassuming at first glance, “Party Shoes” was interlaced with explorations of identity, self-presentation, and the essence and elusiveness of humanity.

Party shoes are a fascinating object of study because we often choose them for very different reasons than we do ordinary shoes. While many people have a go-to pair that make them feel physically and mentally comfortable, party shoes can also transcend the banality of the everyday.  They are often deeply consciously or subconsciously aware of the statement they are making in the social spaces they traverse. As a result, they create a tension between questions of fashion and function — questions which each party-goer must settle individually and uniquely.

To lace up or slide on a pair of party shoes is to immerse oneself in a weaving-together of parties past, present, and future. Because party shoes rest in the interactive, creative space between the inner self and society, analyzing them can also lead to profound insights about both entities.

I hope that my search for footwear truth will shed light on the Swarthmore party scene, and on the many complex factors and people that encompass it. Perhaps it could even illuminate something about the essence of Swarthmore at large. This is certainly a tall order, but I immediately knew I had to try.

So on a blustering Saturday night I make the trek to the Mary Lyon breakfast room for the cross country team’s annual “fancy party.” Allison Shan ’23 is the first person to take mercy on my vaguely ominous interview request, and follows me out into the deserted hallway.

She recalls buying her white and navy Hogans, fashionable tennis shoes that at first glance look like Adidas but on closer examination are embellished with a blue glitter ‘H,’ in London.

“I didn’t bring any formal shoes with me to Swarthmore, but also these are really good for walking around and dancing,” she explains. (Allison hails from Vancouver, so she can’t exactly drop back home on a weekend to get formal shoes whenever she wants. Her face lights up with excitement when she talks about flying home over fall break to celebrate Canadian Thanksgiving with her family.)

Allison seeking comfort in her footwear is no surprise. She’s constantly on the go, running from cross country to squash practice, all while keeping up with her potential pre-med curriculum. While doing two sports at once seems hard enough, I often hear her talk fondly about high school, where she balanced figure skating, tennis and gymnastics practices as well, and often didn’t get home until late at night.

Looking down at her Hogans, Allison reflects on how they are meaningful to her: “They’re pretty simple, but they have this little sequin part. I’m pretty basic in terms of fashion but I like to have little pops of things.”

A passing friend leans in to say Allison is “so smart and beautiful” before taking her hand and pulling her back onto the dance floor. Just like that, she’s gone in a twirl of curly hair and shining sneakers.

The next pair of shoes I find myself facing belongs to Jamail Khan ’21, a religion major from Jenkintown, a suburb of Philadelphia.  They’re stylish brown leather sneakers that complement his blue trousers perfectly. “They’re my favorite pair,” Jamail says, looking proudly down at them, “and it was a fancy party, so these are nicer shoes. I wanted to do some dancing… I don’t wear them all the time because then my foot starts to hurt, but they look nice.”

Allison sees us interviewing and runs over to stick her leg out, her sneaker next to his. He makes a grab for her shoe, but she’s too fast. They laugh together.

Jamail’s loved on the cross country team for how easy he is to talk to. His friends describe him as “charming and fun to be around.” A passerby announces during the course of our interview, “That’s a cool guy. Best guy ever,” without any solicitation.

I ask a few more questions and then figure I’ll stop bombarding him, but Jamail says he wants to keep going, and that he really likes talking about his shoes.  He feels passionately about tying his shoelaces one loop at a time, though he only started double-knotting them a few years ago. Perhaps this decision ushered in a new era of self-presentation — Jamail says that he really started developing his personal style roughly a year and a half ago. He reflects: “Before that I didn’t care about clothes as much. When I got into academia, started being more learned and more aware… I think it came out of the awareness part”.

A few hours later, I’m sitting in the DK third lounge, hearing a recap of the 70s party at Olde Club I ended up missing out on. Across from me sit the crossed-at-the-ankle purple and white Converse of Jules Lee-Zacheis ’23. A prospective theater and neuroscience double-major from Chicago, Jules is already a member of countless music and theater groups and productions on campus. The purple Converse and a scrunchie on the wrist to match are already iconic features of many of their chic black outfits. The last few days had been busy and their feet were hurting. When asked what they did during their stop by the 70s party, Jules said: “a small amount of dancing … I went in to make an appearance, meet someone and stay for a little bit, and I did just that. It was lovely.”

Thinking about their favorite part about the shoes, Jules says “I like the purple, I like the pride flags on them.” Thinking about how the Converse are self-representative, Jules reflects: “I am also queer. I am also vaguely purple. Purple is a color that resonates with me for a lot of reasons.”

Friends jump in to describe them, from Marie Inniss ’23’s free-associations “Jules is pants, Jules is purple” to Ann Sinclair ’23’s reflections that “Jules is a very beautiful person…They have an energy that gets other people excited, too… like when I’m around Jules, I feel more excited about things.”

Throughout this first night on the search for party-shoe truth, I was overwhelmed by the helpful openness of everyone I interviewed, and by the genuine love and appreciation with which their friends eagerly described them. Learning about the motivations behind my interviewees’ shoe choices revealed thoughtful and expressive people who were bringing such positive energy into the respective social spaces they chose to be part of Saturday night. These three pairs of shoes and their owners make me look forward to my next weekend at Swat, and hopefully to a multitude of further adventures and insights.

(And if you have a favorite pair of party shoes you’d be okay with talking about excessively, email ccrochu1@swarthmore.edu – you could be featured in the next issue!)