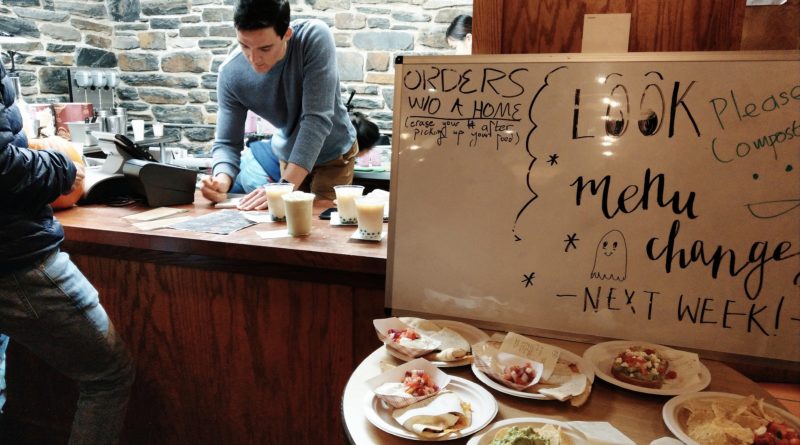 The Crumb Café is now onto its second year and has established itself as Swarthmore students’ go-to spot on late nights. As business has grown, the Crumb’s organizers continue to adjust and evolve its practices and menu in order to improve and streamline its services. This semester, they plan to implement a variety of new options for vegan students, as well as new kitchen roles to send food out more quickly to the growing crowds.

The Crumb is aware of the long lines that form on busy nights like Thursdays or Fridays. To tackle this problem, the Crumb has introduced the role of ‘Kitchen Manager.’

“The kitchen manager is in charge of making sure that all the orders are going out correctly. And, if any of the other four [kitchen workers] need help, they’re getting them what they need, or if someone’s overwhelmed, they help them. It’s just making sure everything’s running smoothly,” described Dakota Li ’22, one of Crumb’s kitchen managers.

In addition, Crumb has introduced new equipment to speed up the cooking process. “Now that [Crumb is] becoming more large scale, I think it’s improving in terms of efficiency. For example, we used to make grilled cheese sandwiches in a George Foreman kind of thing. But now we make it on the grill. So, it tastes better and it’s faster to make,” said Kennedy Hill ’23, a kitchen worker at Crumb.

Most of the new menu item ideas are spearheaded by Crumb employees themselves.

“Henry Han [’20, the Crumb’s former kitchen director] is a culinary genius and just makes things … Gidon [Kaminer ’22] comes up with stuff … I am thinking of some plant-based sandwich options, like using vegan cheese to make vegan quesadillas or vegan grilled cheese,” notes Kali Blain ’22, the Crumb’s current kitchen director. So far this semester, the Crumb has introduced non-vegan grilled cheese sandwiches and is now moving on to renewing its drink menu. “We’re also working on some things in the drink department, like new toppings for shakes and stuff,” said Che Rodriguez ’22, a Crumb kitchen worker.

Furthermore, the Crumb Café has been making a larger profit this semester compared to last semester and has been investing it back into the business to improve the quality of ingredients and materials. “Whereas last semester we were making a profit, but it wasn’t very much, I think this semester, we’re doing better. And we have been able to buy some new stuff…nothing too crazy though. We’ve just gotten like new measuring cups and we have our own supply containers now,” Che said.

Crumb employees also noted that recent shortages of ingredients are normal hiccups in the first few weeks of business. The job of ordering ingredients belongs to Blain. “We are just getting into the swing of things. I am also new to doing inventory, so I’m still trying to figure out how much we go through and I try to get the numbers right. It’s sort of like growing pains and also adjusting to the flow of how much people order, and what days are very, very heavy, and what days don’t use as many,” Blain said.

Blain also mentions how she is trying to further streamline the kitchen by making sure that new menu items share the same key ingredients as dishes already on the menu. “We are trying to focus menu items, using ingredients that we already have. By using as few extra ingredients as possible, the budgeting and cooking process will be much easier”

Crumb Cafe is also looking for more students to sign up as employees.

“Right now, we are looking for new workers, specifically kitchen workers and baristas. Right now, we have one or three open spots for weekly shifts. But we also hire reserves, so people who don’t work a regular shift but can pick up shifts if someone is sick or has a test,” said Blain.

The shortage of employees has caused longer wait times, and it has also made the Crumb’s staff’s shifts all the more stressful. “It does get really packed. Usually, like Tuesday, for example, our Tuesday and Thursdays. It’s kind of slow in the beginning. And then suddenly a bunch of orders just come in at 11 or some time really late. And so we get kind of backed up,” said Hill. Weekend shifts have also been understaffed. “The Friday and Saturday shifts, those positions are hard to fill, because it’s not like a super desirable. I worked Saturday last semester, but I asked to change it. It is an easy night, but if you can’t do anything Saturdays for the whole semester. Plus, sometimes you feel a lot of pressure because some people can’t come because they caught the Swat Plague, or they have homework. And you have to try a cover and finding a cover is difficult,” commented Rodriguez. To solve this issue, Crumb management is planning a rotational schedule. “We were thinking of piloting a rotation schedule where like, people on Saturdays can trade places,” said Rodriguez, “I really hope we can get this worked out, find a solution, and I want to make sure that every shift has enough people.”

In light of all of this, Li makes it clear that the Crumb Café is continuing to work hard to improve, “I think people should know that we’re trying really hard to make it the best experience possible,” she said. “And if it’s a little messy right now, we’re definitely like super sorry for that. But we’re working on it. And yeah, there’s new stuff to come! Be excited!”