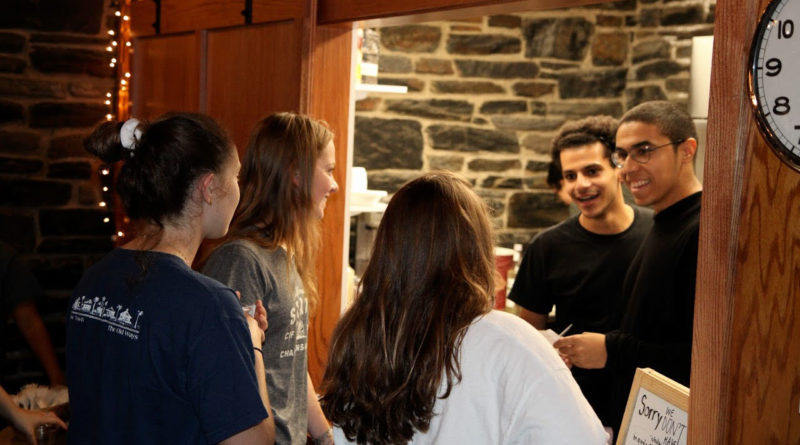 The Crumb Cafe, formerly Paces, the college’s only student-run business, continues to adjust to significant changes this academic year after relocating to Sharples. They have increased their revenue significantly and created a new dry, social space for weekends, but the sudden increase in demand at the Crumb has overloaded workers and raised wait times to over 45 minutes at peak. This, along with changes to the schedule and offerings at Essie Mae’s, has put the dining scene at the college in flux.

For the Crumb Cafe management team, this semester has presented both the successes and the difficulties that come with an ambitious and risky expansion.

Two years ago, Paces was open four nights per week and made around $90 in nightly revenue; last spring was the first semester for which the cafe turned a profit. Now, the Crumb makes an average of $930 each night and is open seven nights a week — leading to an increase of about $6,150 in weekly revenue. More than 80 percent of that revenue comes from meal swipes. According to Head Director of Crumb Cafe Ahmad Shaban ’19, the profits will go towards employing more students, buying new and nicer equipment, and experimenting with higher-quality ingredients.

Last April, after months of deliberation and meetings with their advising group made up of administrators of Dining Services, Auxiliary Services, and the Office of Student Engagement, the leadership team decided to move the late-night cafe from Paces to Sharples, according to Shaban. In addition, they would now be open seven nights a week, serving as the only late-night cafe and social space on the weekends.

“We had been discussing a possible move with them all of last year, but at that point, they decided as a team this would be best for them and the viability of the Crumb (then still known as Paces),” Assistant Vice President for Auxiliary Services Anthony Coschignano said. “We were excited to help them make this transition because it would increase the number of student jobs, help the cafe expand their menu, and give them the opportunity to operate seven days a week, which had been a long-time request from many students.”

But two weeks before the start of the semester, the administrative advising group to directors of the Crumb Cafe asked them to accept meal swipes. In the spring, the team had planned to accept both Swat Points and Dining Dollars (on-campus points) rather than just Swat Points, then transition to accepting meal swipes after they became accustomed to the new space.

“It was like, ‘Oh my god, I don’t know if we can do this,’ Shaban said. “Our end goal was to accept everything on the meal plan but how we wanted to get there was we wanted to maybe do it slowly, so we could make sure we could handle every level of demand … We just kind of had to go for it, take a risk and see what happened.”

However, when it came to hiring, they ran into a myriad of difficulties. Worker slots increased from 40 open shifts at Paces in 2017-2018 to 80 open slots at the Crumb, and these slots were not completely filled until Oct. 9. Because the Crumb had a history of hiring a higher ratio of work-aid students to non-work-aid students than other student employment organizations, Shaban felt that dealing with JobX was an unnecessary hurdle with the other adjustments the team had to make.

“We had to push back our first day because we had issues with JobX,” Shaban said. “By trying to address the issue [through JobX], the school made it more difficult for us to do our whole hiring process … We just kind of had to wait until after the applications were open to the community at large to really be able to start hiring and start training everyone and working.”

Kitchen Directors Adam Schauer ’19 and Henry Han ’20 logged over 40 hours per week in the beginning of the semester in order to train workers in time for the opening, according to Shaban.

“There’s definitely moments where it was like, ‘We may have tried to put too much on our plates,’ Shaban said. “There were moments where we felt like we had to just grind through it and just log in a crazy number of hours just to make sure people get hired, people get trained and we’re opened by the date we said we were going to open.”

Regardless, the move to Sharples greatly improved the experience for workers at the Crumb compared to Paces, Shaban said. Sharples has its own cleaning team, so the student cleaning crew no longer had to convene on Sunday nights to remove the residual smell of beer and sweat  from Paces, which doubles as a party space. Ingredients are also easier to access; when Shaban was kitchen director, he had to push a cartful of ingredients up the hill, from Sharples to Clothier.

At the same time as the college asked the Crumb Cafe team to take meal swipes, Dining Services staff members learned of the changes to Essie’s late-night program. According to an anonymous Essie Mae’s and Science Center Coffee Bar worker, who will be referred to in this article as Jordan, staff members had concerns about the new menu.

“We didn’t really agree with [the changes], we were all kind of beside ourselves, just like, ‘How is this going to work, like how on earth,’ but we’re making it work in a way,” Jordan said. “I can’t say it’s for the best … If we’re going to improve, we should improve by giving more options rather than taking options. And I think in that way we can cut down on certain things, maybe portions or whatever, but to take things out completely, it’s a bit … excessive.”

Previously at Essie’s, students could use a late-night swipe for any items in the store totalling seven dollars, including custom-made sandwiches, hot drinks, snacks, etc., whereas this semester, students can only buy certain items with meal swipes. According to Coschignano, these changes were intended to speed up movement through Essie’s and to restrict the use of swipes to full meals.

“The meal equivalency included in college meal plans was intended to give students access to a meal after Sharples’ dinner hours, rather than the chance to purchase snacks or grocery items from Essie’s,” he said.

Though the options for entrees now include leftover sushi and Chinese food from Science Center lunch and students can purchase more food with one swipe, only the grill is open for food after 8 p.m. This means that students can order chicken fingers and fries late at night, but not custom sandwiches.

According to Jordan, the majority of premade sandwiches do not sell at Essie’s, so they are sold at Science Center the following day.

“I feel like it’s key to make the dinner menu made right in front of you,” Jordan said. “It’s very little work to do … If you’re experienced, or even if you’re moderate, it just takes a minute to do. I feel like it’s worth that cost and that effort.”

Dining services staff members’ overall hours have remained constant since last semester, but staff have significantly less work, Jordan said. They feel that this is not necessarily an improvement for staff members, because making sandwiches does not take time for experienced workers and making food for students is often rewarding.

“I really enjoy cooking on the grill,” Jordan said. “One of my favorite things to see is when we’re closing up and it’s just crowded and everybody smiles and music’s playing and … it’s like a bond. It’s a family in a sense, and it’s awesome, it’s just awesome seeing that.”

The Crumb Cafe’s busiest night is Sunday, likely due to the fact that Essie’s food services are closed on weekends this semester. While the employees at Essie’s have more free time thanks to the dining changes, the student workers at the Crumb are struggling to keep up with booming demand.

“At first, we were really backed up on orders,” Sue Kim ’21, a Crumb barista and manager, said. “Honestly, it’s just the sheer amount of people … We want the best experience for them. Sometimes people get upset when their orders don’t come out on time … That’s no one’s fault, but it’s always stressful as a barista or as a short-order chef to have people waiting and we can’t really do anything about it. That’s honestly been the biggest impact on me, in terms of the change.”

Kim was not previously accustomed to making drinks at a breakneck speed. She worked at Paces last semester as a barista; the more relaxed environment allowed her to spend time making custom drinks for students.

“It’s just been a little weird … I still like working here, but it’s just a completely different atmosphere. [Last year] I’d show up to Paces and we’d just hang out. It was a cute place to be … But hey, I signed up for it,” Kim said.

Perhaps anticipating the more demanding nature of the job, fewer previous Paces employees than expected returned to work at the Crumb.

Sam Sheppard ’21 was one such student who chose not to go back to the Crumb. “I was gonna be a manager this year, then I saw how stressful it was gonna get. I was like, with everything with Essie’s, [the Crumb is] gonna get a lot of customers. I don’t want to have to deal with that,” he said.

Shaban, however, is optimistic that the wait times will improve as the semester goes. After this adjustment period, he says, the team plans to incorporate a greater variety of vegan and vegetarian options as well as planning student group “takeovers” of the cafe.

“[Increased] waiting time is really due to staff being in a new space,” Shaban said. “There weren’t as many returners as we would’ve liked. So a lot of people are new or people have not that much culinary experience. Once people get more comfortable … they’ll speed up the process, and we hired another manager per night to help the short-order, the back, or the front, or anyone who gets swamped with orders.”

Despite the setbacks that the Crumb Cafe has experienced, Shaban is encouraged by the community that has sprung up around the food and the new space.

“There are concrete ways to get involved in organizations at Swarthmore where you get to see direct impact of your actions, like [when] you make a drink and you give it to someone and it puts a smile on their face … When I do that it makes me really happy and I wanted to share that feeling with as many people as possible,” he said. “I think nowadays we spend so much time on finding problems with a lot of things and don’t spend enough time just appreciating the little things.”