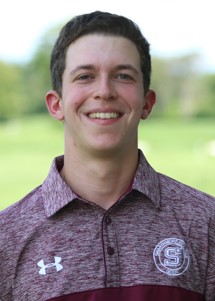 Golfer and first-year phenom Michael Brown ’21 has made a historic impact on the Garnet in his debut season so far. Hailing from Reading, Conn., Brown finished first overall Sept. 10 at the Swarthmore-Neumann Invitational in a field of 82 competitors, shooting a 68 overall, one stroke off the Swarthmore program record. He was named Centennial Conference Golfer of the Week for his performance in the tournament and has continued to impress in both the Harrisburg Invitational and the Montgomery Cup in the weeks following. The Garnet return to action on Sept. 30 at the McDaniel Mason-Dixon Invitational.
Ping Promrat: How has the adjustment to college been for you, both academically and athletically?
Michael Brown: In terms of academics, Swarthmore is definitely a step up for me, as there is a lot more time management involved in balancing aspects of college life. I think I’ve adjusted well athletically, and it is a lot of what I expected coming in. The tournament atmosphere is very similar to what I had in high school and the tournaments I played in over the summer.
PP: What is your intended major, and what interests you about it?
MB: I’m currently undecided. That being said, I’m much more of a natural sciences kind of person, so I’m thinking about a potential environmental studies major. I also really like my Introduction to Economics class, too, so I’ll see where my interests take me.
PP: What has been your favorite part about collegiate athletics so far?
MB: I’d say bonding with the guys on the team. We’ve travelled together for multiple tournaments so far on the weekends, and I’ve had a great time with them so far. Also, it’s been great to see where my game stacks up on the collegiate level, as the field of competitors is much stronger than in high school.
PP: What are your athletic goals for the fall season?
MB: Hopefully to win as many tournaments as possible as a team. Personally, I want to stick to my routine of practicing with the team along with working out on my own. We have a great hitting net right by Mertz Field, so I plan to keep working on my swing daily, and making sure that every piece of my game is at its best for the upcoming tournaments.