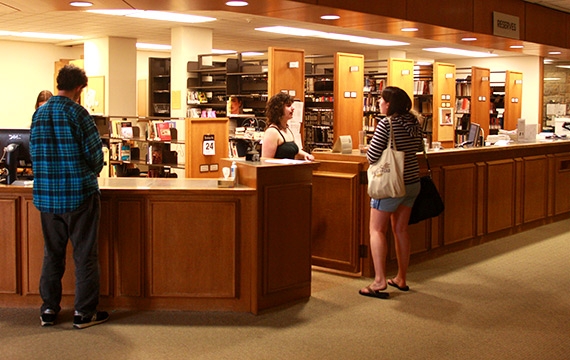 On March 13th, as part of the broader campus-wide initiative to implement the OneCard system, McCabe Library announced that Swarthmore IDs would be required to gain access to the library at any time after 8 P.M. The announcement, made by College Librarian Peggy Seiden, came a couple weeks after Director of Public Safety Michael Hill informed students, staff, and faculty that Public Safety would be installing a variety of new security measures in McCabe, one of them being the implementation of the OneCard system. The measures will eventually include the placement of cameras near the entrances and exits McCabe, as well as a “greeter” at the entrance of McCabe where the current circulation desk is.

The new measures come after multiple incidents involving graffiti swastikas occurred last semester in one of McCabe’s gender-neutral basement bathrooms. Hill, however, insisted that it was not a single event or set of events that drew new security measures, but simply a broader initiative to make the Swarthmore community safer.

“Our first priority is the safety of our community. To that end, Public Safety, the Bias Response Team, Library, Facilities, ITS staff, and the OneCard Office, worked to develop a plan that would enhance safety at McCabe while also retaining our commitment to open access,” he said.

Initially, the proposed measures for McCabe included cameras in public spaces of the libraries, as well as requiring students to use their OneCard at all hours of the day to gain entrance to the library. Seiden pushed back against a lot of these measures.

However, she understood that many students had felt that their library space had been made less safe following the graffiti swastika incidents.

“People were incredibly upset by the events that happened starting in August. So we were definitely concerned and wanted people to understand that we heard their concerns,” Seiden said.

Seiden also insisted that the “greeter” at McCabe’s current circulation desk will not play the role of a security guard, but hopefully will deter any would-be criminals.

“We want it to be about greeting and saying, ‘Welcome to the library. If you need any help, here are the people who can help you.’ What we’ve found is that simply making eye contact with people is the best way of dissuading any sort of [criminal] activity,” she said.

As all of the new McCabe security measures start to be implemented and as the OneCard system comes online at buildings across campus, Seiden and other library staff have had concerns about privacy and confidentiality in McCabe, especially with regards to tracking visitors. Seiden pointed to pushback against the Patriot Act by libraries, as well as the policies of the current Trump administration, to justify these concerns.

“[Under the Patriot Act], if the FBI had a FISA warrant, you couldn’t even say that the FBI had been here. There was a library in Connecticut that was served a gag order, and they broke the gag order. To my knowledge, we have never been served a warrant. I certainly have never been served a warrant. But it’s concerning because of the kind of school that Swarthmore is … this is not stuff that maybe under previous administrations we would have been so worried about,” she said.

Indeed, Hill confirmed that the OneCard system has the potential to track the movement of students on campus, albeit primarily in the event of an emergency.

“In the event of a situation where the safety of a community member is at stake … The OneCard program would be one tool we might use to identify the last known location where the card was used,” he said.

On this front, Seiden felt that McCabe’s compromise with the administration and Public Safety on the new security measures alleviated some of the concerns library staff had, and that Chief Information Technology Officer Joel Cooper’s role would be vital moving forward.

“I trust [Cooper] implicitly to really continue to push that this data is not ever used, and it gets wiped out on a regular basis unless there’s some extreme circumstance. I think together we’ll make sure the nobody’s confidentiality is at risk,” she said.

In addition to tracking movement, Some students also worry that the access privileges on the OneCard actually make dorms less safe. Dan Bidikov ‘19 said that $200 was stolen out of his room after the OneCard system was put into place on the fourth floor of Parrish.

“It gave access to Parrish 4th to students who didn’t live in our hall,” he said.

“The only success stories I’ve heard from the OneCard are about Public Safety yelling at students for leaving doors propped open,” he said.

However, the OneCard system also brings potential benefits to McCabe, both now and in the future. Seiden noted that security near fire doors would greatly improve both the protection of library collections and the safety of the library as a whole.

She also hinted that the OneCard opens up the possibility of 24-hour access to McCabe.

“We’ve always wanted a OneCard because, for one thing, it allows you to contemplate being open 24/7, or maybe 24/5,” she said.

For the near future, however, McCabe will continue its normal operating hours as the new security measures come into effect. McCabe is also slated for renovations soon, and Seiden hopes to bring a mural to the library through the Mural Arts Program and a grant from the Soros Foundation.