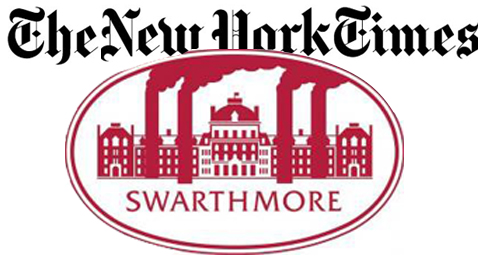 Last Friday, McMenamin competed in the 5k for the first time as a member of Swarthmore track & field. She made the most of it, running it in a time 17:02.96 that was the third-fastest for the event in Division III and the fastest in the Centennial Conference this year. More impressively, her time shattered the Swarthmore school record (17:20.89), which has been in place for fifteen years. She was named the Centennial Conference track athlete of the week after her record-setting effort.

How it felt when she found out she set the school record in the 5k:

“I’ve been seriously injured on and off for the past two years, so just having the chance to race feels incredible. Being able to set a school record and potentially qualify for nationals in my first 5k is more than I ever could have hoped for a few months ago when I was just starting to train again.”

What the experience of competing in the 5k for the first time as a Swarthmore athlete was like:

“If you had told me two years ago that I would be racing a 5k on the track I would never have believed you. I’ve always considered myself a middle distance runner and honestly hated the longer stuff until this fall when I started having some success in cross country. I wanted to see if that could translate into the 5k and if my speed could give me an advantage over more seasoned long distance runners. I thought twelve and a half laps would feel pretty miserable, but while it was definitely long, it actually wasn’t as bad as I expected.”

What she thinks about when she’s running:

“I’m usually trying to analyze the splits I’m getting from my coach, how I’m feeling, where I am in the pack, and how many laps I have left and trying to put it together to decide what I should be doing and how fast I’m capable of running. I think the longer races can be a lot harder mentally just because you have so much more time to start feeling sorry for yourself. I think it’s important to try to be relaxed through the first few miles so I tried to just stick to a pace, stay confident and not think too much about how far I still had to go. When it gets to the last couple laps, I try to leave it all out there, and I don’t really think about anything except the finish line, and catching the girls in front of me.”