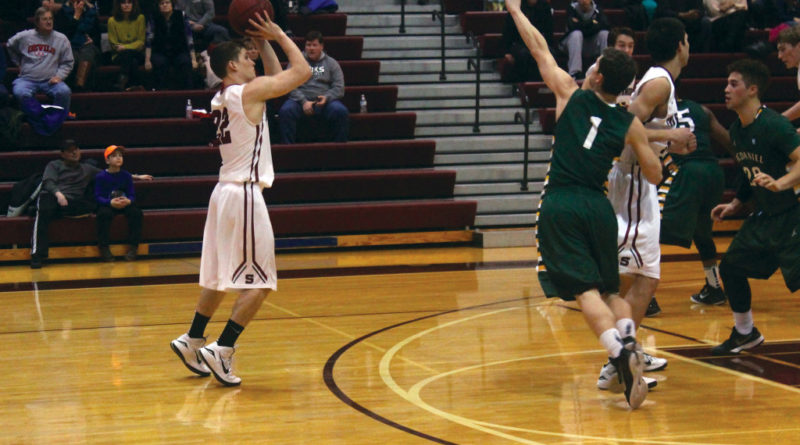 The men’s basketball team pulled off a tight win in its last home game of the season, defeating visiting McDaniel 69-68. This, combined with Wednesday night’s 81-62 victory over Washington College,  put the Garnet at an overall record of 11-13, assuring them of their first season with double-digit wins since the 2006-2007 season.

Once again, the team found itself in another close contest. However, thanks to the players’ grit and a strong long-range game in the first half, which saw eight three-pointers, Swarthmore entered the second half leading by a slim margin of 36-31.

McDaniel forced Swarthmore to fight to maintain their lead until the very end, getting themselves to within one point in the final second of the match. However, Swarthmore sealed the win in the end, their fourth in their last five home games and second in a row overall.

This was the last home game for Karl Barkley ’15, who was recognized for his contributions to the team beforehand. Barkley stepped up when the team needed him most by scoring 10 of the Garnet’s 33 points in the tense second half.

Matt Brennan ’18 led the team with 19 points, followed by Barkley with 13 points and Chris Bourne ’17 with 12 points. The Garnet will play its last game away at Haverford on Saturday, looking to add to what has already been a solid season thus far.

The women’s basketball team defeated Washington College on Wednesday night, 64-54. As usual, Elle Larsen ’15 led the way, this time with her passing as much as characteristically scoring and rebounding. Larsen scored 18 points, along with 13 rebounds and five assists. Jess Jowdy ’16, Chastity Hopkins ’15, and Raina Williams ’18 provided support, ending the game with a combination of 31 points and 19 rebounds.

In their last home game of the season on Saturday, the team fought hard but ultimately lost to Centennial Conference leaders McDaniel College by a score of 58-51.

The Garnet kept the game close in the first half, closing up their deficit from 10 points to two by the end of the first half. However, McDaniel ultimately controlled the game in the second half, preventing Swarthmore from getting within five points for the majority of the half.

The seniors on the team contributed heavily with their strong presence and impressive performances. Larsen and Hopkins were both honored before the game. Larsen led the team with 23 points and 14 rebounds, marking her 10th double-double for the Garnet this season. Hopkins added three points and three rebounds.

Although they no longer have any home games, the team hope to finish the season on a strong note against rival Haverford on Saturday, which they lost to by a score of 62-53 in their prior matchup this season.

The men’s and women’s track teams both competed in the Valentine Invitational hosted by Boston University last Saturday. Garnet history was made when Paul Green ’16 overcame a bout of mononucleosis and ran the fastest mile in Swarthmore history, accomplishing the feat in 4:14.73.  With this, Green broke both the indoor record for the mile set last year and the outdoor record from 1970.

The women’s team had an impressive performance in the mile of their own when Sarah Nielsen ’16 ran it in 5:00.65, which was among the best marks in the nation. Osazenoriuwa Ebose ’15 continued to excel in the shot put, with a toss that measured 42 feet 2.75 inches. Ebose’s effort ranked sixth overall in the competition and first among all NCAA Division III athletes. Indy Reid-Shaw ’17 also represented the women’s team, completing the 3,000-meter run in 10:28.88.

Both teams will head out to Haverford next Saturday to compete in the Keogh Invitational. There, they can get themselves ready for the Centennial Conference Championships, which will take place the following Saturday at the same location.