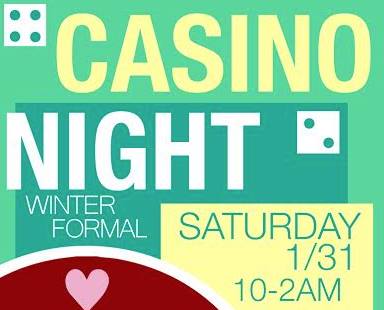 This year’s Winter Formal, coming this Saturday in Upper Tarble from 10:00pm to 2:00am, will be somewhat different from previous years. Aside from two new policy changes, this year’s winter formal committee took a departure from previous years’ Yule Ball theme and decided upon a casino theme, though rejected themes include a beach theme and an “awkward prom” theme. The Winter Formal committee consisted of Christine Kim ‘17, Tim Vaughan ‘15, John Larkin ‘17, Noah Weinthal ‘15, Amanda Lee ‘17, Jessica Seigel ‘16, and Jordan Sciascia ‘17.

The first half of the party will feature a mock speakeasy in Paces, casino games like poker with professional dealers (the committee originally tried to get faculty members to be the dealers but there was not enough interest), and, most importantly, real prizes. The grand prize for winning at the casino games is a $150 gift certificate to Buddakan, a popular restaurant in Philadelphia. The gift certificate includes a limo driver what will take the winning students to the restaurant and back to Swarthmore.

The second part of the night will be a more traditional dance party. The student DJs will be a freshman lineup of Lanson Tang ‘18 and Bennett Parrish ‘18 for the first half of the dance party (11:30pm to 12:30 am) and Joaquin Delmar Perez ‘18 for the second half (12:30 to 2:00am). When asked about the stability of using Upper Tarble as a dance party space, given complications at the 2012 Childish Gambino concert held there, committee member John Larkin ‘17 responded that the stage would be moved to the steps at the front of Upper Tarble, which has more stable concrete supports — as was the case at this year’s Halloween party.

This year, there will be two new policy changes from previous large-scale parties. The first change is the check-in area will be in the west side of Parrish Hall instead of inside Clothier. This aims to both lower the congestion going into Upper Tarble and keep people warm in Parrish if the lines get long. Party-goers will leave coats and receive their stamps and 21+ wristbands in Parrish and then walk over to Upper Tarble to be let in by a SwatTeam member. If students try to go straight to Upper Tarble, they will be redirected to Parrish.

The second policy change relates to checking in alcohol: in previous parties, like this year’s Halloween party, attendees over 21 were allowed to check in alcohol at the bar area throughout the party and the barkeep would put a number on it and the same number on that attendee’s wristband and they could access it throughout the duration of the party. Now, the alcohol check-in time will be during the same time as guest check-in, which will be from 8-9pm. Only the person who originally checked the alcohol in will be able to access it. The alcohol will be checked into the mock speakeasy in Paces and people who leave their alcohol behind at the end of the night can pick it up in the OSE the next day.

The guest policy and all other policies will be the same as for previous parties.

November 20, 2020 Nicole Liu 0
Do NOT follow this link or you will be banned from the site!