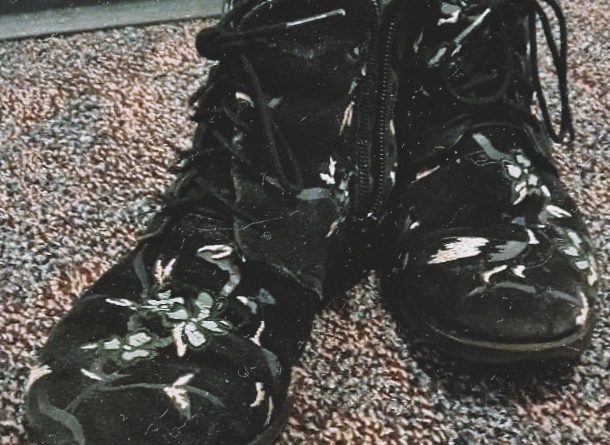 Ah, winter formal. The force of chaos and upset that tests even the strongest of friendships. Where you are forced to bump repeatedly into your classmates’ back sweat and wander listlessly through Essie’s— the humidity of hormones unmistakable but unsettling. For some, it’s an elusive window of opportunity to finally make a move on that cutie from organic chemistry; for others, a chance to stress-eat from the charcuterie platter and oatmeal raisin cookie container that remind you of the catering at high school dances.

On the hunt for a remarkable pair of party shoes, I stumbled through the dark of Upper Tarble, scanning the ground. My panic only grew as I saw pair after pair of strappy heels, dress shoes, and flats in neutral shades of taupe and navy. While objectively polished, these shoes lacked any sort of uniqueness or personality. The worst part was that I couldn’t even be mad when I was wearing nondescript black heeled booties. I myself had yielded to the social pressure to conform with my footwear.

But then I saw them. The perfect shoes. Black laced boots made out of a felted material— they were relatively unassuming at first. Under the colored lights being emitted by the DJ booth, though, I could just make out the glimmer of multicolored embroidery. They belonged to Hannah Sobel ’22.

A few days later, Hannah curls up on the Lang Music third-floor couch, its cushions easily containing her 5’2’ frame. In the gentle sunlight, the shoes are visible in all of their subtle magnificence. Minutes before she leaves in them for a voice performance, she unravels the rationale behind her selection of these uncommon shoes last Saturday.

“I don’t like to be formal,” she says. “These are my: ‘I’m trying to be nice and respectful’, but also ‘I can’t do it, I need to rebel!’ shoes.” Their color coordination with her green tie, an effect produced by the green flowered embroidery, was also an important factor in the decision. And they make her feel powerful: “They have a quarter inch heel, which proportionately, if you take my height, actually means something.” Her laugh bubbles up, infectious and irrepressible.

Then Hannah grows more reflective, considering how her preference for a shoe with a heel might be connected to her study of music, saying: “I like shoes that make noise. I like the rhythm when I’m walking.” As a music and math double-major, that satisfying rhythm brings together both disciplines and illuminates unexpected overlaps between them.

Hannah picked her boots up at a store called Camper in Manhattan — a borough over from her home in Brooklyn, NY. Hannah’s friend, Reuben Gelley Newman ’21, who comfortably sits on the floor next to the couch doing work and occasionally interjecting, also attests to the quality of the company.

In fact, going barefoot is often how Hannah feels most comfortable. She enjoys the lack of imposed constriction and conformation, and the feeling of freeness without labels imposed on her identity, that going barefoot provides.

But when she does want to wear shoes, she often finds herself reaching for these boots. She has worn them to Critical Mass performances (Swarthmore’s medieval and renaissance a cappella chamber group) and parties alike. She even plans to wear them over the weekend to NYC NATS, a national competition for college voice students. She realizes they’ve become a source of comfort and reassurance, saying: “I like to feel powerful … if I’m nervous about something … I know that people like them, and I like them, and they fit my feet well.” The shoes have certainly become famous among her friends, one of whom, Hannah jokes, is in a committed relationship with them: “She said ‘I like them’, and I said ‘Hey, they like you too’, and it was the start of something beautiful.”

Hannah brought the shoes’ charismatic energy along with her to winter formal, but doesn’t want to disclose too much about her night. At her request, I am inserting her answer to my inquiries about her experience as simply: [nervous laughter]. But she does mention that she felt powerful wearing the shoes as she walked back to her dorm in the drizzling rain.

As much as Hannah loves to feel powerful, though, she is also humble in her everyday interactions. No matter how many times people compliment her shoes, for example, she’s always newly surprised. She’s also humble when I ask about her extensive singing experience and her many composing and conducting undertakings — she’s writing the score for the Yellow Stocking Player’s production of “A Midsummer Night’s Dream” and conducting the Garnet Singers this spring. And despite that all, she still somehow has time to dedicate to being a supportive cross country and track teammate, as well as a huge emotional support for her friends.

When asked how she thinks her boots represent her, Hannah runs her hands over their black felted material, remarking: “They look all dark, but they’re just soft,” and then, “I just admitted to being soft … yikes.” She also notices how the embroidered flowers are composed of many different materials, which she believes could represent her many different emotions, and her diverse academic and extracurricular interests. “They’re entwining through multiple parts of the shoe,” she says, “ just as I’m intertwining through multiple parts of Swarthmore”.

Finally, I ask Hannah what she thinks of the party scene here. “I don’t really notice it,” she says. For her, the point of a Saturday night isn’t to necessarily party. It’s to “not worry about work and to spend time with people I like. And if that means going out to formal and getting dressed up in matching shoes and tie, that’s what I’m gonna do. And if that means not doing that, then I’m cool with that too”.

Despite Hannah’s more laid-back attitude towards partying, she brings an incredibly positive presence to functions like Winter Formal and to the Swarthmore social scene at large. Just like the multi-colored but interlacing embroidery on her boots, Hannah is full of vivacity and sensitivity, humor but humbleness, prowess and power. Interviewing her inspires me to notice interweavings and blurrings among academic disciplines, styles of presentation, and emotions. And I know I will remain forever grateful for her unique shoe choice that night two Saturdays ago, when your poor party shoes analyst was stumbling through the dark of Clothier, desperately searching for an inspiration.