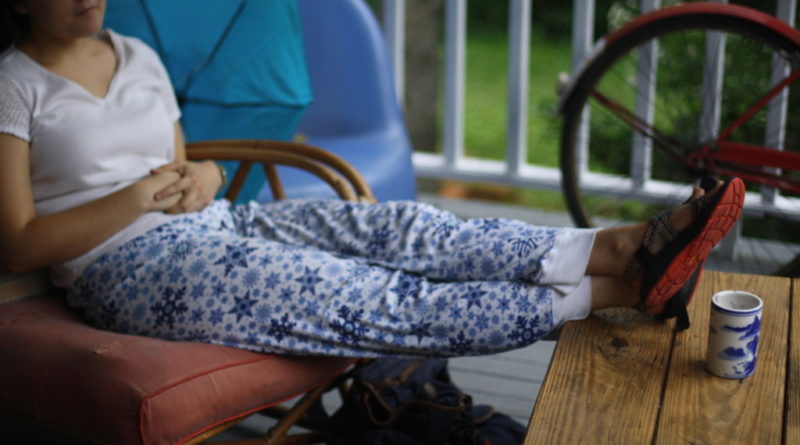 There is something uniquely appealing about wearing other people’s clothes. I spent the night in a friend’s room in Palmer, and when I woke up alone in her room the next morning, with an invitation to borrow her clothes for the day, I went into a state of trance-like excitement — I wanted to try on all her clothes, to put together an outfit that was “me” but also a perfect copy of her. How contradictory!

This excitement extended beyond wanting to wear her clothing. I also carefully applied the eye shadow she wears every day, and the blue eyeliner I’ve never seen her wear. It was exciting and stimulating to be able to place myself in the mundane context of someone else’s life. But it was also comforting; this context was so other, it affirmed my feeling of being distinctly “Nora.”

Perhaps my experience sounds strange. But consider other contexts of wearing other people’s clothes: a classic example is wearing the boyfriend’s clothes, which is so ubiquitous it has been transformed into a common marketing strategy (think New: Gap boyfriend jeans/shirts/sweaters).

I interviewed Joseph* and Jenny* about the two sides of wearing a significant others clothes: Joseph speculated about why his girlfriend always seems to have three or four of his sweatshirts: “I guess they remind her of me.” This is the common trope — a girl likes to wear her boyfriend’s clothes because they remind her of her boyfriend, and because they somehow stake a concrete physical claim over that boyfriend. Jenny, from the other side of the dynamic, agreed that yes, “I like knowing [my boyfriend] has worn this so many times.”

But she also stated a simpler and broader reason for taking his clothes: “I like his clothes. And wearing them gives me access to an extended wardrobe without having to buy more clothes! It’s like a wardrobe that rotates on a constant basis.”

Part of the fun is connection, but part is also newness. Joseph, when he talked about borrowing his friend Will’s* snapback hats, expressed a similar combination of borrowing clothes for both connection and sartorial ambition: “It looks good on him, so I want to wear it and have it look good on me.” Wearing the snapbacks is an expression of admiration for a friend, of desiring similarity and closeness, but also an expression of a simple desire to wear something and look good. Joseph simultaneously got to connect to Will and become a more distinct, better-dressed version of himself. There is a contradiction between self-concern and desire for connection inherent in wearing someone else’s clothes, whether they be a friend or a significant other.

Every time I have been complimented while wearing a friends clothes, or even my brother’s or my mother’s clothes, I feel a moment of pause and a rush of discomfort at reaping the credit for someone else’s style. And then I say, “Oh, no, thanks, its xyz’s shirt, I stole it/borrowed it/love it so much too.” And so I take the role of admirer of the clothes along with whomever has complimented me.

Because they are not mine, and I can take no credit for them, I get to be the outsider of the very clothes I am wearing. There is something freeing about that. It absolves you from responsibility, and yet elevates you. If the clothes look bad, it’s not your fault. If they look good, you get a little validation, and a comfortable space of connection with your complimenter that never exists when you can take real credit for the compliment.

But the other, simple side of this is that clothes are fun. They are fun when they are various, when they are new, and when they are changeable. I once watched a pretty dumb documentary about happiness on Netflix, but the one thing I remember from it is that variety in daily life, even seemingly unimportant variety like walking a different route to work one morning, can make us happier.

Clothes seem to serve that happiness-through-variety purpose too. Even if your roommate’s snapback is only a little different from your baseball cap, it’s different enough to be exciting: it is full of a new set of connotations associated with that friend, a new couple of colors, a new possibility of combination, and a new way to enter your Sunday morning.

So maybe, Joseph, your girlfriend wants to be reminded of you, and to proudly show those around her that you are a part of her life. But maybe she also just wants to wear a new sweatshirt that’s different from her own because it’s yours, but also because it’s simply not hers.