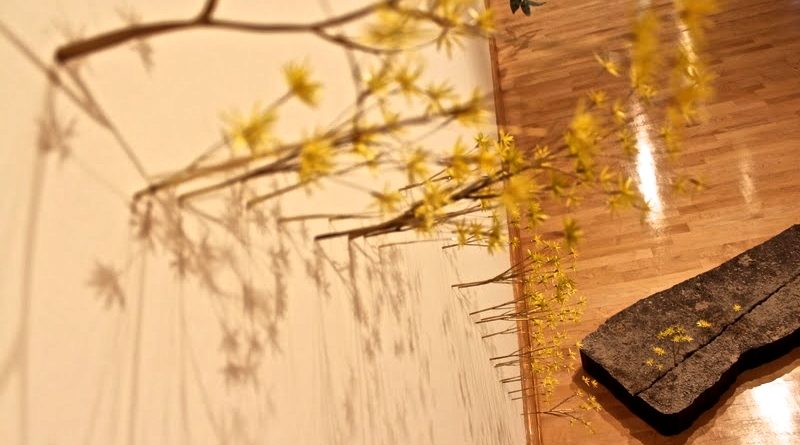 Recently, artist and Haverford College faculty member Markus Baenziger gave a lecture on his work and his new exhibit, “Wayside,” which has been open in the List Gallery since September 10.

To open, exhibit curator Andrea Packard briefly recounted the process for choosing Baenziger’s work. She described its accessibility and its separation from what she called “art school navel-gazing.” And she is right — what is more natural to look at than nature?

Baenziger began his lecture with two images. The first was a picture of his grandfather’s studio in Switzerland, which he followed with an almost shockingly different picture of his current Brooklyn studio. It was a fitting introduction to a lecture on Baenziger’s exhibit, which juxtaposes the timeless and the modern in sculptures that reproduce nature with crafted materials.

Baenziger commented on his motivation for giving a lecture before a gallery showing.

“In my talks I intend to contextualize my work,” he said. “I am interested in providing additional information on what inspired the work, including my thoughts and experiences that led to the creation of the work, how it was made, and how it relates to the other works.”

In his lecture, Baenziger described the different inspirations and methods for his work, showcasing a variety of work from several exhibits throughout the years. Not all of the pieces shown in the lecture were part of “Wayside,” but all of his work follows similar themes of what he called “pushing nature to accommodate needs.”

He revealed the creative stimulus for much of his work to be where he lives in Brooklyn. Baenziger looks for interfaces between the natural and the artificial, looking on sidewalks and landfills. He referred to a group of small trees that stands out among the gray walkways of his neighborhood as particularly inspiring for their constrasting different aesthetic quality within their environment.

The artist considered thoroughly the industrial intricacy of putting the pieces together. “It’s almost like an erector set,” said Baenziger, describing one of his pieces. An erector set is a surprising, revealing comparison — the artist’s work does not have the self-aware, mass-produced quality of some pop art, but retains and even flaunts its influences of artificial construction.

Baenziger detailed the process of coloring his works as both a difficult hurdle and unique experience of sculpture. He described the use of color in painting as “predictable,” going on to explain the exceptional difficulty that sculptors face in making their art. In order to produce the contrasting natural and rusting, metallic hues of his pieces, Baenziger had to dilute colors in resins, which ended up making entirely new colors.

He spoke in even greater detail about the quirks of sculpture art when he talked about the selection process for materials and the deliberation behind how space was used.

Three dimensional sculpture requires special attention to the very dimensions of every part of the piece. The pieces in “Wayside” (most obviously, the sculpture made with pieces of chain-link fence) will only exist as complete works of art once. In his lecture, Baenzinger explicitly pointed out how the physical form of sculpture is difficult to reproduce, referring to the process of reconstructing his sculptures in different kinds of spaces. By showing pictures of 3D sculptures, he implicitly made commentary about the challenges artists of his medium face in presenting their work in forms like lectures.

“Representing my work in the form of an image can’t capture the complexity of experiencing it first hand,” said Baenziger.

Yet Baenziger shows no bias towards the craft of sculpture in the world of art. In his lecture, he spoke of his time in an artistic residency in Maine. Baenziger referred excitedly to the amount of different backgrounds and materials available, mentioning what he called “window shopping” between different artistic departments that helped his artistic growth. He takes advantage of the opportunity to expose himself to a diverse mix of artwork.

“I make an effort to see as much art as I can,” Baenziger remarked. “The benefit of living in New York City is that one has access to an abundance of fantastic galleries and museums. Often I am drawn to works of art that have no direct relationship to my own work. Seeing a great work of art, and this can be as diverse as for example a sculpture by Rodin or a video of a performance by a contemporary artist, is what challenges me to demand more of my work.”

This process of viewing art is what Baenziger would describe as building a “visual vocabulary.” An artist’s visual vocabulary is, in Baenziger’s words, “the visual components of a work of art, such as form, material, texture, which draw specific references that inform how the work is interpreted.” His mastery of this vocabulary is apparent in “Wayside,” as learning more about the materials in a presentation offered a new level of depth to the following viewing of the exhibit.

Baenziger’s work is on display until October 26 and, lecture or not, is worth attending.