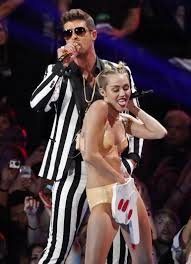 Two situations shaped my understanding of the “Songs of Summer 2013.” The first: commuting to my internship by car every day and having complete control over listening to “Same Love” or the Bee Gees (I tend to choose the latter). The second was an awards show I can’t help but revisit. Through these two lenses, I’ve observed the following trends:

The incorporation of instruments or sounds that do nothing other than repeat throughout an entire track. Think the “woo”-ing in “Blurred Lines,” the song that validated Robin Thicke’s candidacy in the race to sing at Kim Kardashian’s wedding.

The same songs tend to repeat on the radio at strange intervals that are never quite uniform. Flipping through all of the Top 40/Pop Mix radio stations saved on your dashboard controls and finding that Zedd’s “Clarity” is playing on every station is more frustrating than wanting a Chick-Fil-A breakfast burrito on a Sunday morning.

The “Sexually Adventurous Disney Channel Star” genre has blossomed beyond Miley Cyrus (thanks Selena Gomez). Fans are extremely likely to purchase Miley’s upcoming album “Bangerz” simply because they are unsure if the album package contains music or serves as a pre-order for a new combo meal at Sonic Drive-In.

Cher still looks younger than anyone, despite the hunk of dinosaur meat wedged in her 12-year-old molars.

Lana Del Rey’s Summertime Sadness became her first top ten single. Because that is the song everyone thinks of when they think of dear old Liz- while they’re swingin’ in the backyard.

One Direction’s “Best Song Ever” is anything but the best, but the boys are so bloody hot they could release a song about athlete’s foot and still manage to excite me more than a shirtless Mario Lopez hosting this season of “Dancing with the Stars.”

I’m unsure of what to make of these developments in summer music. “Best Song Ever” managed to win the VMA for “Summer Song of 2013.” Unfortunately, “Blurred Lines” will probably go down in the record books as the “Summer Song of 2013,” joining the ranks of “Umbrella,” “California Gurls,” and “Party Rock Anthem” as a song that, when summer is over, prompts a groan every time it pops up on the radio.