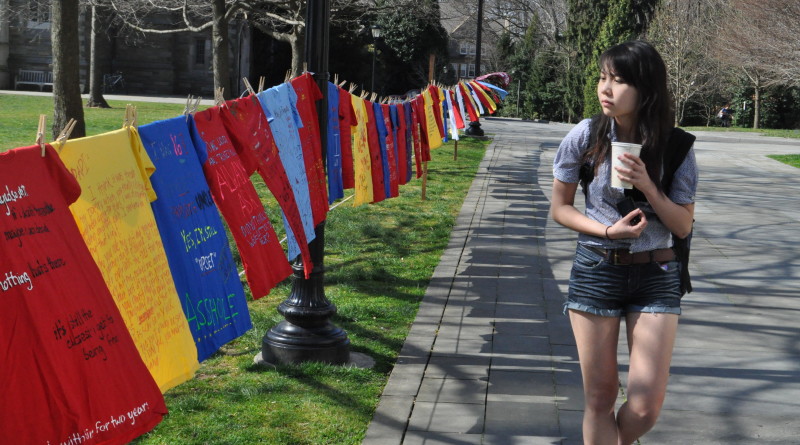 Created by a small coalition of women in Cape Cod, Massachusetts, the Clothesline Project has grown into a nationwide movement to honor survivors of violence and sexual assault, inspiring various spin-off projects. This year, Delta Upsilon (DU) and Phi Psi pushed the boundaries of the project by inviting Swarthmore to pledge against sexual assault and abuse through handprints and badges.

The project began in 1990 after a group of women learned that 58,000 soldiers died in the Vietnam War while 51,000 women died as a result of sexual violence during that same time period. Historically, the project has been dedicated to raising awareness of violence against women; however, Co-Organizer Lisa Sendrow ’13 said the event at Swarthmroe highlights violence against all people. Sendrow is part of Swarthmore’s Sexual Misconduct and Resources Team (SMART) which organized the Project on campus including working with the fraternities to help set up their events.

“Around 120 handprints were pledged,” said DU SMART Liaison Matt Bertuch ’14, reflecting on the pledge’s strong turnout. Bertuch said the event displays how everyone has an active role in preventing sexual abuse.

According to Trevor Shepherd ’15, part of DU’s community service committee, the event reached out to members of the Swarthmore community too. “A group of moms hanging out on Parrish Beach pledged, as well as students and faculty,” Shepherd said.

Matt Lamb ’12, former DU President, says he feels it is up to the fraternities to step up as leaders to speak up against sexual assault. “We are an all-male controlled student space and we do throw parties with alcohol which increases the likelihood of sexual assault happening,” said Lamb. By participating in the project, Lamb says DU aims to be a responsible party host through combating sexual assault.

In addition to DU’s pledge, for the first time, Phi Psi held its own campaign for the Clothesline Project, the Power of Words, which ran from Tuesday to Thursday. In their campaign, they tabled at Sharples handing out badges and stickers that acknowledge the power of language in perpetuating violent attitudes.

“These badges are regular name tag stickers, but will have slogans underscoring the importance of watching what you say,” said Phi Psi President Mike Girardi ’13. “For instance one badge will pledge ‘Say what you MEAN and MEAN what you say.’”

Phi Psi says it plans to expand their involvement in the Clothesline Project. Brothers of both DU and Phi Psi also helped SMART distribute white ribbons in Sharples during the week of the Project. Those who wear the ribbons identify as supporters of survivors of violence and sexual assault.