Arts & Features » The Dark, the Twisted, and the Strange: ‘Ivona’ Takes the Stage 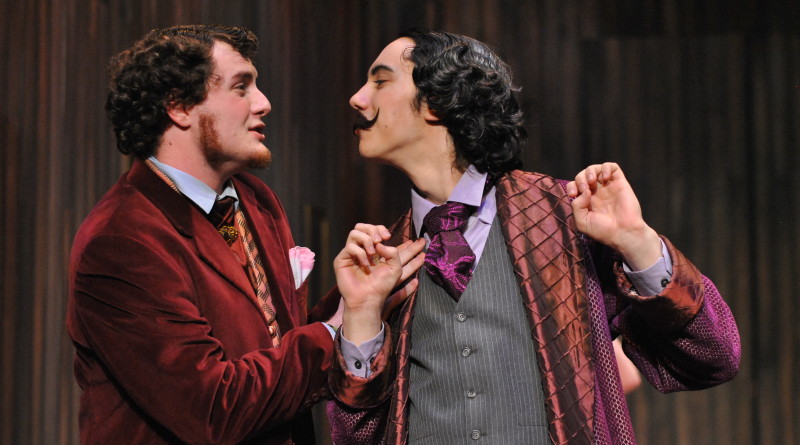 Playwright Edward Albee once said, “Theater holds a mirror up to its audience which says, ‘This is who you are. You don’t like it, tough. Change.’” This year, Production Ensemble is doing just that.

Enter the mystic world of Burgundia, an imagined yet realer-than-life world populated by a contrived court and restricting rules. Mirrors abound, not just in the hallway and in the form of mannequins watching the action, but in the judgments of others. The strangest aspect of the kingdom is Ivona, a sluggish and morose girl who repulses all and forces even the most confident to reexamine everything they thought they knew.

Ivona: Princess of Burgundia, written in 1938 by renowned Polish playwright Witold Gombrowicz, is brought to life by director Professor Elizabeth Stevens. It is the story of a stuffy, imposing royal court and the prince who defies it by proposing to the ugliest girl in the kingdom.

Prince Philip (Josh McLucas ’15) appears as conceited and womanizing. He radiates bravado, but it’s clear that there’s something more complex than what meets the eye. The prince meets the morbid mute Ivona (Maddie Charne ’14, Sophia Naylor ’13), whose eyes glisten with anger and fear, allowing her to wordlessly communicate. Philip defies the norms of his society and family by asking for her hand. Ivona’s very presence in the court causes friction within and between other characters, transforming their self-conceptions and relationships with one another. This dark yet hilarious tragicomedy ends badly for all.

The stage is a wooden hall of mirrors. All the characters (save Philip and Ivona) are adorned in royal purple. The set changes feature modern, base-heavy twists on classical-sounding tunes. The effect is eerie, causing you to squirm a bit in your seat as you are stared down by garish mannequin heads above the chandeliers.

All these elements in compilation — the peculiar technical components; the surprised introspection; the all-too-real yet all-too-farcical nature of the characters; and most obviously, the miserable and lugubrious Ivona herself — can cause one’s stomach to flip. “There’s something really agitating about it, in a great way. It agitates and tickles at the same time in this way that I feel promotes conversation, thought [and] engagement with it,” Stevens said.

The show is tragedy, melodrama, philosophy, comedy, and love story all in one. This farcical exposé of high society has a definitive, fear-striking dark side, but also some laughable twists and turns. Characters’ dark sides surface near the end of the show, when each is individually forced to grapple with Ivona and everything she represents. The show displays a true cast of characters, both exposing the ridiculousness of the court and creating real people. “She’s an upsetting mirror for everybody,” Stevens said.

Ivona’s cast has fully taken on the challenges of creating this bizarre society and the world of Burgundia.

“They’ve just entered this made-up world,” Stevens said. “One of the things we worked on is making up the rules of Burgundia… anything could be true about Burgundia, since it doesn’t have to have any relation to reality… they’re still making up rules. National past times, what people do in Burdgundia. They’ve thrown themselves into that, and I think they’re having a good time.”

The cast sheds fresh light on this classic piece. The play’s dark, sardonic humor has earned it a place among contemporary great works and the theater of the absurd. “It’s a strange play . . . It’s got a dark, Eastern European sense of humor, sense of the grotesque, and a little absurd,” Stevens said.

Stevens said the show espouses no political message and proclaims no “moral.” Instead, it asks the questions it wants the audience to ponder: “What’s interesting about this play is that it doesn’t have some kind of moral or message; it just exposes something ugly in human nature. But it doesn’t say ‘well here’s what we should do.’” Instead, it asks the question of the audience. “You’re just sort of forced to look at the way [Ivona] is provoking,” Stevens said. “Maybe that helps you think about your own sense of who you are in the world and whether or not people think certain things about you.”

The line “Hell is other people” is explored in a unique, darkly humorous light through the mirror of Ivona. What’s most interesting about the play, Stevens said, is “feeling like you never know who you truly are. Who’s that person without any mask on? It’s impossible to not have a mask. You’re always trying to take the mask off.

Photos by Elena Ruyter for The Daily Gazette.