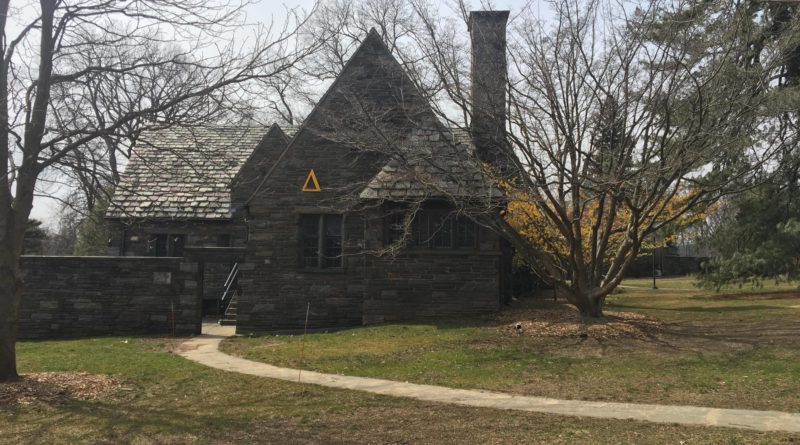 When individuals pledged to now-disbanded Delta Upsilon fraternity at Swarthmore in 2013, they were required to create a separate Gmail account for internal communications. These communications included “minutes” that would contain statements like ‘Grade A USDA Slut’ and ‘his wife had a great rack.’ The Phoenix confirmed that emails of this kind were sent to a Google group of DU members as recently as 2016.

The Phoenix and Voices received unsolicited internal documents, that were redacted, with DU minutes that span from February 2013 to August 2013. These minutes include photos, details about fraternity leadership positions, accounts of campus events and fraternity meetings, and descriptions of a regional DU seminar. Some of these minutes contain sexually explicit references of women as well as racist comments.

The Phoenix reached out to 13 former DU leaders and members present in 2013, 11 of whom did not respond to our requests for comment and two of whom declined. DU leadership in 2019 also declined to comment.

A PDF of the redacted documents that The Phoenix received can be found here.

The hardware party: get nailed, hammered and screwed

Our brotherhood is tighter than your little sister

Delts in your mouth, not in your hand

Giving girls their first pearl necklace since 1834 [Editor’s note: this refers to an explicit sexual act]

In an email sent by a DU member to the Google group on February 2, 2013, the member suggests that these phrases were party themes and t-shirt slogans included in a powerpoint at a DU regional leadership seminar in 2013.

“There was also a talk on good party themes and T-shirt slogans. I’m not sure why, I just woke up and this was the topic of discussion up on the projector screen,” the member wrote.

The email contained photos of Powerpoint slides from the seminar.

“Yeah I’m not kidding there’s pictorial evidence if you think we’re making these up. Just thought you all should know about the great things we’ve been learning all day on your behalves.”

The Phoenix has not been able to verify the origin of the photos of the Powerpoint slides and has made the decision to not publish the photos.

In a statement to The Phoenix, Ashley Martin Schowengerdt, Director of Communications at DU international fraternity, wrote “we have not seen the information you have, but we believe the photos are from a risk management presentation that uses examples to explain to chapters what not to do and how to confront those behaviors in their chapter and community. This presentation was given by an award-winning, nationally recognized speaker designed to ‘focus students back on their founding values while explaining the rationale behind all of their excuses for change’.”

The Phoenix requested the Powerpoint slides from the presentation in 2013, but DU International Fraternity declined to share them with The Phoenix.

The DU regional leadership academy is now held in various locations, based on the province where the chapter is located: West, South, Northeast, Great Plains. or Midwest. Swarthmore’s chapter is located in the Northeast province. For chapters in this region in 2013, the seminar was held in Philadelphia.

According to Rob Losco, current province governor of the Northeast region of DU, the current regional leadership academies bring in staff members and professionals in higher education to hold talks and discussions about issues such as Title IX on college campuses, underage drinking, chapter recruitment, and chapter leadership. If students or other speakers presented at DU regional events, their powerpoints were submitted to IHQ.

“…they [IHQ] should be able to tell you not only who hosted it [a regional event], but the students who submitted the itineraries because you’re supposed to submit basic information. If you do have a PowerPoint, they would want you to send a copy of it, things like that…” Losco said.  “And if there was anything added on later, like something like what you just mentioned, then IHQ wouldn’t have been knowledgeable of it.”

Losco believes that while IHQ exercises oversight over regional events that chapters and IHQ organize, they don’t have control over every aspect of how individuals run these events.

“Unfortunately, IHQ, they run a tight ship, but they’re not all powerful. They can’t be everywhere and know everything. And guys do things, you know, less reputable than we would like, but, you know, we do the best we can.”

Losco emphasized the value that DU places in transparency and not withholding secrets.

“You know, if anybody if you ever confront interview or reach out to someone who is less than forthcoming. If you could let IHQ or myself know someone in official capacity, that would be appreciated, because they’re not representing our organization. And that’s something that we would hold, you know, basically, offense to, because there’s no secrets, no barriers, no walls. So if someone says anything to the effect of ‘mind your own business’, or ‘don’t worry about it’, or ‘we can’t provide that information’, then they do not represent us.”

Aftermath of the Minutes: Alums Reflect on DU Culture

After The Phoenix and Voices published internal Phi Psi documents on April 18, Brian*, a DU alum who graduated in 2013, was contacted by a former classmate. She was distraught about the contents of the Phi Psi minutes.

“It’s easy to just think of the minutes in a vacuum … I wouldn’t say this individual and I were particularly close. But the point was that [the person who reached out to me] just didn’t know what to do. And those minutes were having negative ramifications on people years later, that had nothing to do with drafting them or doing them,” he said. “And I guess it just opened my eyes to all of the other harms the fraternities had imposed on people for years, and even decades in some instances.”

While the conversation with his former classmate upset him, Brian was even more disturbed by his own initial reaction to the documents.

“The minutes by themselves weren’t shocking to me. And I guess that was another big part of it is that I just wasn’t shocked when I saw it. I was like, yep, that sounds about right for Phi Psi. And that realization is what kind of hit me, that the fact that I wasn’t shocked, just disgusted me,” he said.

Soon after, Brian decided to forward the emails containing the Spring 2013 DU minutes to The Phoenix and Voices.

The semester the minutes were written — and Brian’s last semester at Swarthmore —  was a time that former President Chopp coined ‘The Spring of our Discontent.’ That Spring, two students, Hope Brinn ’15 and Mia Ferguson ’15, brought federal Title IX complaints against the college, garnering national attention. After much discussion, protest, and accusations against the fraternities on campus, a referendum to eliminate Greek life on campus was eventually voted down by the student body.

Brian advocated for DU against anti-frat activists at the time.

“To my regret, I was probably one of the more active defenders of DU at the time, and I had a number of arguments with some of the anti-frat people,” he said. “ I guess with the time I just had blinders on and my affiliation was with the fraternity rather than necessarily the side of justice or, or trying to do better. And I did not see, I just didn’t see the problems that they said were there, which I can’t deny anymore.

Looking back on his own experience as a DU brother, Brian believes that he and other brothers believed themselves to be the better fraternity.

“I think it was a fairly positive one on the whole. And this is not intended to be self serving, but at the time and still to this day, at least in part, I believe DU was better than Phi Psi. That’s not to say that we were morally justified in in our existence, but we seemed to be less shitty than Phi Psi was. At least that was the reputation that we held of ourselves and I think was held on campus,” he said.

Within DU itself, Brian described a mixed culture. While some brothers took part in an intense party culture, others were in the fraternity for the relationships.

“So I think, to say that there was one fraternity culture is I think overstating it,” he said. “I think there were definitely people who would get trashed on like a fairly and by trashed I mean belligerently intoxicated on a fairly consistent basis and arguably had an alcohol problem …  But there were people who were there more for that. And then I think people who are like me who just enjoy having a group of guys to hang out with that you wouldn’t normally associate with.”

Tom,* another DU alum, also eventually re-evaluated his role in the fraternity. Like Brian, two factors impacted his decision. Unlike Brian, however, Tom’s change of heart was while he was still a student at the college; he became largely inactive at the end of his sophomore year.

“First of all, I had a lot less free time and I found friends outside of the frat. And also, as you get educated at Swat you learn what’s acceptable and what’s not acceptable language. And I was definitely beginning to notice that as I interacted with the people there. But at some point, it just bothered me and I stopped really showing up to most things. I still went to parties sometimes, but I wasn’t very happy with a lot of the stuff that was going on,” Tom said.

Both Tom and Brian reported hearing racist, sexist, and homophobic comments made by members of the fraternity.

“I’d like to say that I did more to tamp [the comments] down,” Brian said. “But I didn’t. At the time I just wrote it off as that’s how guys act in fraternities. It wasn’t constant, I would say in between infrequent and occasional. I wouldn’t say it was like a conscious effort to be misogynistic or racist or homophobic or any of that other stuff. But those kind of remarks I think would happen more casually, which arguably made them worse.”

“I think a lot of the guys were baseball, but not all of them, of course. I think that also added another kind of bond within the society,” Brian said.

For Tom, DU’s connection to the baseball team meant that members on the team had a very different experience than those not on the team.

In contrast, Tom thought that DU members felt oppositional to the rest of campus.

“It was very much like an us versus them kind of mentality. Like, the campus wants this. So we need to do this … we need to keep up a good reputation so that we don’t have an adversarial relationship with the campus, as opposed to being part of the campus,” he said. “You know, it’s a boys’ club.”

According to Tom, this mentality served to further isolate the brothers.

“It’s a shame that the culture was the way it was, because a lot of the time, it felt like to me, especially when I first joined, and for a lot of the guys there, it was the only place where they could be vulnerable about themselves,  in terms of their feelings. But at the same time, that was probably something that turned them more inward towards each other than rather than out towards the campus at large.

This dynamic, Tom felt, had adverse effects on both the fraternity brothers and the campus.

In the years since 2013, the fraternity has been suspended and reopened multiple times. This week, on April 30, Delta Upsilon unanimously voted to disband their chapter.

“Over the last few weeks, Swarthmore Delta Upsilon has listened to the concerns and feelings of the campus community. After much discussion, the members of Delta Upsilon have unanimously decided that disbanding our fraternity is in the best interest of the Swarthmore community. We hope that our former house will provide a space that is inclusive, safe, and promotes healing,” the fraternity wrote on their Facebook.