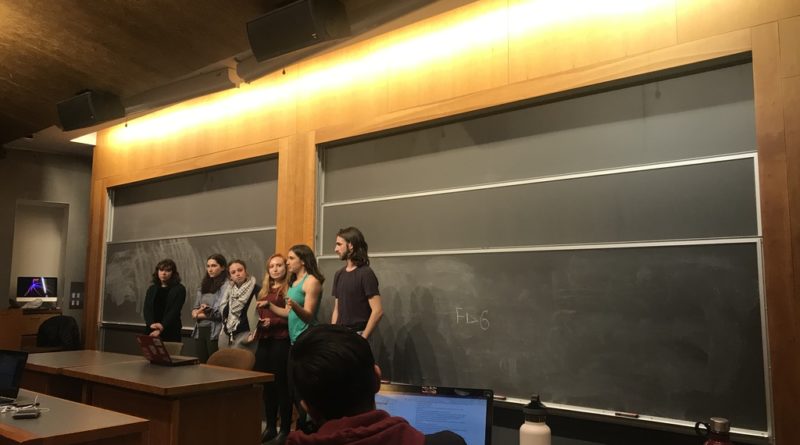 On February 11, 2019, Swarthmore College’s own chapter of the national organization Jewish Voice for Peace held its first meeting in Kohlberg under the helm of members Abby Saul ’19 and Sydney Covitz ’20.  JVP is a national group dedicated to supporting policies and campaigns, more specifically the boycott, divestment, and sanctions movement, and people who fight for peace, justice, and human rights, especially in a Palestinian-Israeli lens.

According to its website, JVP’s mission statement declares a stance against Israeli occupation of Palestine, and other forms of injustice and violence, in order to work for peace in the Middle East.

“JVP is committed to organizing as Jewish Americans to fight and dismantle all forms of oppression, whether it be anti-semitism or islamophobia in the U.S., or whether it be the occupation and apartheid in Israel Palestine,” said Saul.

Despite being a national organization, Swarthmore’s chapter will also focus heavily on working in the local community.

Rabbi Michael Ramberg, the Jewish student advisor, believes that students should be open to all perspectives.

“My hope for students is that they will act on their deeply held convictions while also respecting the humanity of individuals who hold opposing views and beliefs. I hope that people with varying perspectives on challenging issues will be able to engage with and learn from each other and thereby increase their ability to do good,” said Ramberg.

JVP also has garnered support from SJP, as the two groups share many common goals.

“We are very excited about the formation of JVP on campus,” said SJP member Killian McGinnis ’19.  “So far there has not been explicit collaboration between the groups, though some of SJP’s members are now in JVP. We share the goal of working in solidarity towards a just peace in Israel/Palestine, including by holding our own institution accountable for its complicity in Israel’s human rights violations, and we are looking forward to cultivating more opportunities for collaboration.”

Nationally, JVP has come together under a common issue and launched petitions to support political activist Angela Davis after the revocation of her Civil Rights Award, as well as other outspoken individuals who support Palestinian rights.  Saul and Covitz plan to join the national movement’s fight against injustices and oppression.

According to the BDS website, the movement was put together by national and international Palestinian organizations to fight for the freedom, justice, and equality of citizens whose rights are being taken by Israeli government.

On campus, Students for Justice in Palestine (SJP) announced that it was launching a BDS campaign in October. Most recently, a resolution, brought to SGO from SJP, was voted down. In light of SGO’s recent rejection of the BDS movement on campus, JVP offers support to SJP and other BDS-supporting groups on campus.

“Our goal is to create a space for Jewish students on campus to fight against the human rights abuses Israel is currently perpetuating and support BDS as a viable means to do so,” said Covitz.

Saul reassures that JVP will also be a space for Jewish traditions, and even in some cases have them intertwine.

“JVP really digs into Jewish tradition in order to enact justice,” Saul said.  “For Shabbat services across the country, local chapters hosted a Shabbat in support of Professor Davis, welcoming her and other radicals who support Palestinian rights into Jewish communal spaces.  JVP really fuses Jewish ritual with political activism, and uses the organization’s unique positionality as a Jewish leftist organization to support the BDS and other movements.”

This political activism, along with JVP’s national scope, sets the organization apart from other groups on campus, most prominently SJP.

“We decided to created JVP at Swarthmore because, as many of our members pointed out at our first meeting, we are filling a void that currently exists on campus,” Covitz said.  “We also recognize our positionality in all of this as one of incredible privilege and power. The fact is that when Jews speak out against Israel, people tend to listen, and we plan on using our platform to promote justice and equality for all people living in Israel/Palestine, and to support SJP’s BDS campaign in any way that we can.”

JVP, however, is not fully supported by all students on campus, as a member of Swarthmore Students for Israel can attest.

“I don’t think JVP adds anything to Swarthmore.  JVP at Swarthmore merely adds yet another organization that will reinforce the preexisting anti-Israel echo chamber,” said SSFI co-president Matthew Stein.  “SSFI merely exists to provide a voice against the chorus of misinformation about Israel and the corresponding hateful and oftentimes antisemitic rhetoric. It represents students who hold a very broad range of views on Israel, from left-wing progressive to right-of-center.”

JVP is a national organization and is therefore not limited to the resources and funds of a student-run club.

“We have a lot of resources and explicit support,” Saul said.  “But even as a national organization, the distinct chapters provide a framework with a lot of flexibility.  Many of the people we connect to through JVP have a lot of history in Jewish life and political activism. We definitely want to prioritize building relationships with people on and off campus.”

JVP’s status as a national organization provides an easy way to network with other students at different colleges.

“Some of our members have contacts at JVP chapters at other colleges and we plan on reaching out to them in the future,” said Covitz.

JVP meets every week and will announce their future events and activities to become more well known to students on campus.  Saul and Covitz hope to quickly gain traction in support of their goals.

“All meetings and events are open to anyone on campus who is interested in coming,” said Covitz.  “We also hope to get a website up and running soon.”

“Something we’re excited about is to have a space that is explicitly Jewish and explicitly political,” said Saul.  “We think that there are a lot of people who that really resonates with. Part of organizing in our community also means creating a joyous, liberated community that everyone feels included in, and safe and happy.”