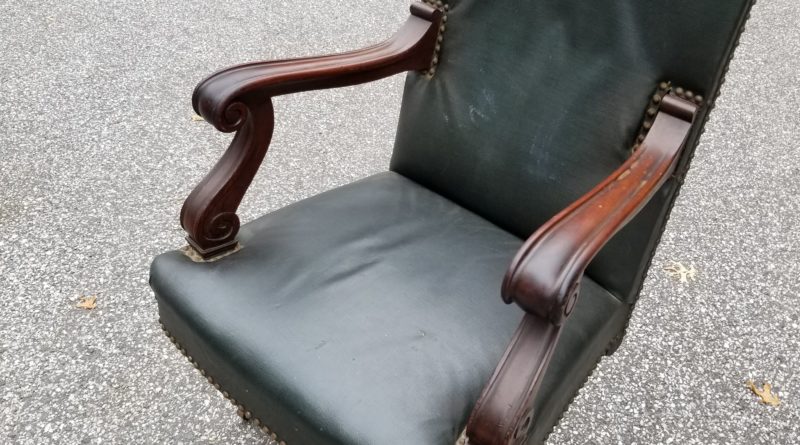 I bought the chair on a sunny Saturday afternoon, October 6, 2018, at a thrift sale outside the Swarthmore Presbyterian Church. A kind old man sold it to me for exactly one dollar. I did not have cash on me, so I borrowed money from Youogo Kamgaing ’22, who hounded me relentlessly for the next month until I paid her back. Having gotten the chair, I gleefully rolled back to campus, all the way to my humble Willets room.

I sat in this mahogany masterpiece, the height of luxury, for two months. Never had I felt more important, special, or satisfied in my entire life. I enjoyed every moment rocking back and forth on my throne, stroking its sweeping arms and caressing its tight leather.

But all good things must come to an end. One fateful day, my roommate brought up in conversation that in his opinion, there was an obnoxious odor emanating from something within our room. I had a sinking feeling in my stomach, which immediately worsened when my roommate suggested that my dearest chair might be the culprit. Instead of becoming defensive, denying the allegation and blaming something else (like his running sneakers, or my perhaps-too-infrequent shower schedule), I went along with him and agreed to try leaving the chair in the Willets 1st lounge for a week. Because ultimately, while this chair was extremely dear to my heart, my relationship with my roommate would always take precedence.

My roommate concluded at the end of the week that the room did, in fact, smell better without the chair; rather than dispute this conclusion, I agreed to leave the chair in the Willets 1st lounge permanently. This was not a completely unideal scenario; in fact, I was actually almost pleased with how it turned out. Sure, I would rather have had the chair in the privacy of my room to sit in and do with as I pleased, but knowing that other people would be able to enjoy it too, to revel in its beauty and bask in its glory, gave me pleasure I could not have had if it were confined to the walls of Willets 113.

And of course, with it being so close, I too was still able to use my chair whenever I needed. I sat in this chair to work on math late at night, to journal when I was moved to do so, or just to lean back and relax. This chair kept me company at all times of the day, on all days of the week.
It was not the best chair in the world (it did cost only one dollar for a reason). The springs were old, the wheels were stuck, the leather was dry and crumbling, and it probably had bed bugs or something. But I loved it, and it really meant something to me.

It still does, even now that it is gone. On Wednesday, February 20, around 6:00 p.m., my chair was spotted in the Willets basement lounge. Around three hours later, it was gone. I do not think that this abduction was an act of malice. If anything, I think it was an act of love, an expression of desire for my chair. I understand this, because it is the same desire that led me to purchase my chair in the first place. I’ll be honest, if I saw such a glorious chair sitting defenseless in the lounge for months, I too would be tempted to take it for my own. So I will not try to claim the moral high ground — that is not what I am looking for.

The responses I have gotten to my plight have, for the most part, been cynical. “It’s your fault,” they say. “If you leave something in the lounge for two months you should expect it to be stolen,” they say. But I refuse to be a cynic. I trusted the people of Willets when I put my chair in the lounge. Even now, I still have an ounce of trust, faith telling me that my chair will be returned to its rightful place in the Willets 1st lounge.

Editor’s Note: Gidon has since been reunited with his chair, thanks to the kind and selfless folks of Willets basement. With that being said, the editor still felt it fitting to include this piece in this issue because (1) it serves as an example for any other lost chairs that might be out there and (2) it demonstrates the dramatics that Swatties will go to to be reunited with their loved ones.