This is the second part of a two-part photo essay Jiang created. The first part, focused on Mexico, was published in the last issue of the Phoenix and can be found online. 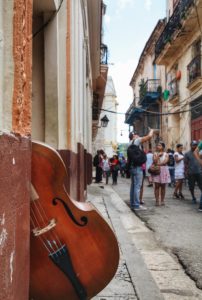 After a short trip in Mexico, I went to Cuba directly and experienced completely different cultural vibes. I was told that Cuba’s popular culture has three important components: drinks, dance, and music, and that musical instruments, like the cello, are one of the most important cultural symbols. As I walked on the streets of Cuba, I felt as if everyone was musically talented in some way, and that nobody could withstand the temptation of dancing to Latin music. 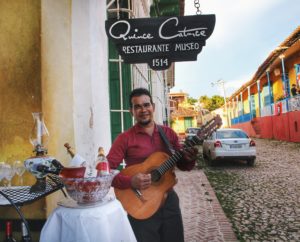 We met this musician at one of our dinner places in a small town called Trinidad. I asked if I could take a picture of him, and he graciously gave me permission. Every single meal we had was accompanied by wonderful live music. I found it very interesting that lots of Cuban restaurants I visited chose to combine music with the food experience, which is different from the food culture that I grew up in. We gladly discovered that our dining surroundings and experience were made better and unforgettable by the beautiful music. 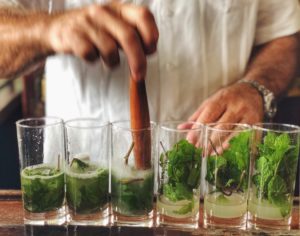 Sitting in the bar “La Bodeguita”, in Havana, I watched the bartender make fresh mojitos from scratch and listened to lively Cuban music, feeling as if I was sitting right next to Hemingway, who once famously said, “My mojito in La Bodeguita, my daiquiri in El Floridita”. 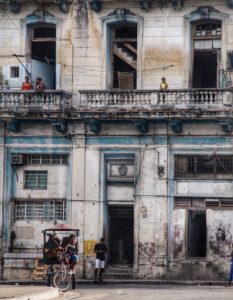 I was walking on the streets in Havana when I saw people casually resting and chatting in these architecturally beautiful yet extremely old houses. We could still hear Latin music by talented Cuban musicians playing nearby, which colored the neighborhood with a sense of liveliness. As I took this picture, I felt at peace as the locals blended into their surroundings harmoniously.

It has always been a pleasure to see how people on the other side of the globe live and think, and my deeply enriching trip to Mexico and Cuba helped me build a more holistic view of the world.