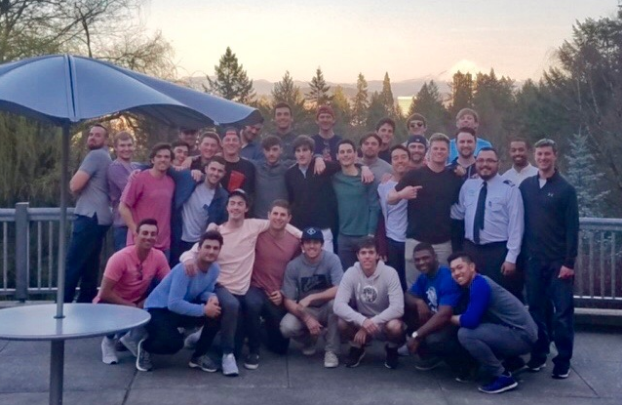 While most varsity sports teams travelled south to warmth during spring break, the baseball team packed up and flew out to Portland, Ore., to wear the Swarthmore S with pride out west.
When the coaching staff first proposed the idea of the unique trip, there was speculation that the team would play at Safeco Field, home of the MLB’s Seattle Mariners. However, after learning that this opportunity would not be possible due to logistical issues, the team made the most of the trip anyway, competing at a high level and enjoying the new environment of the Pacific Northwest. At first, the decision to change locations was met with controversy among the baseball community, as many families did not understand the location change to the colder, wetter climate, which is not conducive to baseball. The coaching staff explained their intent to allow parents of student-athletes from the West to see their sons play more easily, thereby necessitating the change from previous years trips to Florida and South Carolina.
On top of this, the trip’s annual goal is to pit the team against competitive opponents that Swarthmore would not otherwise face here in Pennsylvania, while also strengthening the team’s baseball skills and bonds between teammates. Each student-athlete not only learned baseball lessons, but also life lessons in discipline, perseverance, resilience, and positivity. The countless experiences on the bus, in nature, on the field, and as a team proved invaluable to everyone involved.
In the end, the weather held out for the most part, the competition proved worthwhile, and the baseball team wrapped up with a 5-5 trip, sparking their 9-5 start to the 2018 season. After first flying into Portland, the team started off the trip with a split double-header over Lewis & Clark College, followed by a dominant rebound win against them the next day. Swarthmore dominated both wins, and the loss occurred on account of a walk-off single in extra innings.
Before their next stop, the team took a tour of Portland, taking pictures at the beautiful Japanese Rose Garden and seeing the young, hipster city. Then, while bussing out west to Walla Walla, Wash., home of Whitman College, the team also explored the beauty of the Columbia River and went indoor skydiving, adding to the many unique and new experiences for many team members. Once back on the field, the Garnet first lost a nailbiter to Whitman, this time on a walk-off double, before coming back to dominate in game two. Starting pitcher Owen Webb ’21 dominated his lone start of the trip in the win, recording seven strikeouts in six strong innings.
Immediately after the win, the team packed up for a long, late night haul to Tacoma, Wash., for another doubleheader against University of Puget Sound. Swarthmore swept that series behind a collective 22-run effort, highlighted by grand slams off the bats of designated hitter Jackson Roberts ’19 and shortstop Coleson Hebble ’21. Reliever Frank Sammartino ’20 and catcher Sam Jacobson ’21 also made their collegiate debuts with solid contributions to each win.
On the following off day, the team made the two hour trek to Tillamook, Ore., to experience the local food scene, namely, the world-renowned Tillamook cooperative dairy factory and the accompanying meats in the area. This trip ended at the Pacific Ocean, with a number of players making their first contact with the West Coast before heading back down to Salem, Ore., for the final series. Although the Garnet lost all three games in the final series to Willamette University, the team remained resilient, fighting to the final out. Outfielder Jared Gillen ’20 had a strong showing in the series, going four for 10 and scoring three runs batted in (RBI). The disappointing end failed to dwindle the team’s morale, as the trip still proved to be an overall success.
Thus, the team better established its pitching rotation, particularly with starting pitcher Ricky Conti ’19 leading the Centennial Conference in wins with three thus far. Conti thought the trip was a positive experience overall, reiterating the team’s improvements and the fierce competition.
“Most of our team had never been to that part of the country, so it was definitely a new experience. The trip ended up being a blast … excellent for team bonding and chemistry,” said Conti.
Submarine reliever Zach Gonzalez ’19 also posted a team-leading zero earned run average (ERA) through his 5.2 innings of work, while sophomore relievers Jack Corkery ’20 and Adam Schauer ’20 each picked up a save over the trip. On the defensive side, the outfield stood out as a strong point, while the infield will continue to improve on its fielding percentage. Nevertheless, the team looks poised to contend for a Centennial Conference title moving forward and hopefully a spot in the NCAA tournament beyond that.
As the team returns to continue its regular season before conference play, the Garnet face off against Stockton University in a double-header March 23. The following Saturday, the Garnet kick off conference play against Johns Hopkins in a home double-header as well. After a fifth-place finish last year, just out of conference playoff tournament contention, the team will look to further improve on these past few building years.