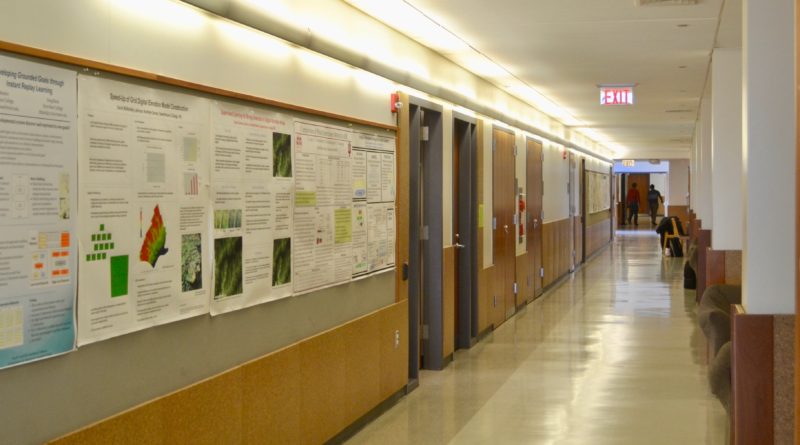 In the last two weeks, the computer science department, known for its increasing size and consequent lotteries, conducted tenure talks in order to hire a new tenure track professor. The first talk was marked by a joke about the CS lottery amongst the students in attendance. While tenure talks are not unique to CS, they do come at a critical time in the department’s development due to its unprecedented growth.

According to Professor Jeff Knerr, CS only had two professors when it began in 1985. It now has 12 — eight tenure track professors and four visiting professors.

Knerr has taught CS 21, the intro class, many times, and he reminisced about a time when there were only 10 CS majors and he taught a CS 21 class with only 16 students.

“It was wonderful,” he said. “I got to know everybody.”

Now, it’s rather difficult to imagine a class that small when there are about 60 CS majors and 10 additional minors each year.

“It’s a crazy time right now,” Knerr said, referring to the number of students who are now taking CS.

However, the department is experiencing growing pains when it comes to the expansion. Knerr said that there are currently not enough professors to meet student demands. This shortage of professors has led to CS 21 classes that have almost 40 students and a lottery that helps cap these high-demand classes.

“The CS department is always looking for more professors to expand the department because it is definitely growing exponentially,” said Kyra Moed ’20, a student member of the search committee for the tenure talks.

Moed feels that the shortage of professors hasn’t caused any noticeable problems in the quality of education for students, whether it’s the class size or accessibility to professors.

“I think the department does a really great job at ensuring that no matter if it’s your first CS course or your senior year [they provide] a lot of support … All of the professors I’ve encountered are really passionate about teaching,” she said.

Michael Davinbry ’19, another student on the search committee, would not comment on the effects of the class sizes, but he said that the one of the department’s long-term goals is to hire more professors.

“I do think the CS department is trying to grow, so they’re hiring more professors. So I think that would benefit students and the faculty in general,” he said.

The tenure talks are necessary to hire a new professor who might help the CS department meet the demands of students.

There were four talks in total, with two occurring each week. The talks had three components: the research presentation, an informal lunch interview with CS students, and a mock class. The search committee in charge is comprised of tenure track professors and three student members, who were chosen by the faculty.

“My job is to gather feedback on candidates from other students and … summarize those feedbacks and present it to the faculty,” Davinbry said regarding his role in the interviewing process.

One of the themes of these tenure talks is student involvement. This is reflected in the nature of the three parts, the student component of the search committee, and the invitation for student observation and feedback on the candidates.

“I would imagine that the CS department values student input, and Swarthmore is an institution that values teaching as well as research, so having input from students in a way to get student opinions on a candidate [seems] … valuable,” said Davinbry.

The first part of the tenure talks was the research presentation. This involved the candidate explaining research that they were conducting and featured interaction between the candidate and faculty and CS students in attendance.

During the first research presentation, the classroom was nearly full with students and faculty in attendance. It lasted for approximately an hour.

After the research presentation was the informal lunch, which was coordinated by the students on the search committee and was independent of the faculty. Students were able to get to know the candidate in a setting outside of the classroom.

The final part, the mock class, started in the evening and lasted approximately 30 minutes. Students in attendance were asked to be “silent observers” while the faculty on the search committee took on the role of students in the “class.”

The first mock class was about binary trees. The instruction was short due to the limited time frame and was intended to be a lesson from a lower-level CS class.

The expansion of CS and shortage of professors that have resulted in the tenure talks are not unique to Swat, according to both Knerr and Moed.

“It’s really impressive how quickly it’s grown and how popular it’s become. And I think that’s true at every college and every university that there’s just this struggle to find people who aren’t just drawn by the money to [computer science],” said Moed.

There are many open computer science positions available in the job market today, which is leading to the growing number of students interested in the department. Knerr noted that it’s critical for everyone looking for a job to have a basic understanding of computer science, which is why there is not just an increase in CS majors but CS 21 students as well.

“[There are] lots of jobs, lots of opportunity. And some of them are lucrative,” Knerr added.

Because of this trend in available jobs, many colleges and universities nationwide seem to be experiencing difficulties finding professors who are willing to teach when they could have a more lucrative job elsewhere.

“I have heard in general that there’s a shortage nationally of CS professors,” Moed said.

The CS department has used the lotteries and now the tenure talks as ways to deal with its over-enrollment of students and subsequent shortage of professors. While the lotteries have been implemented to control class sizes, the addition of a new professor is needed to support the increase of students. But despite the problems that the department is facing, the heightened demand for CS majors in the job market will maintain its popularity in the years to come.