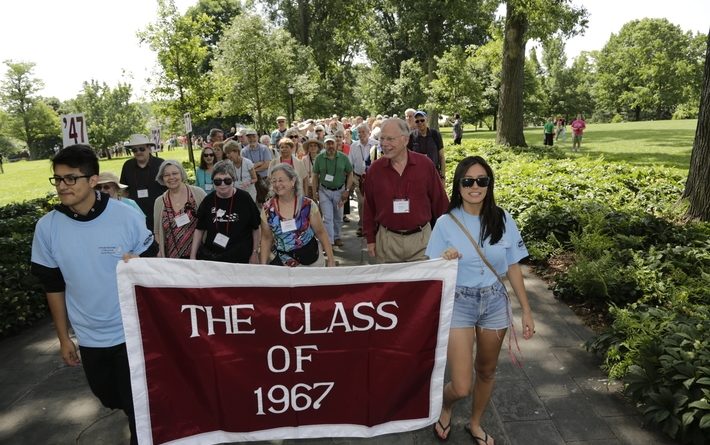 Dear class of 2017:
When my Class of 1967 was getting ready to graduate, we paid no attention to the class of 1917, which was then celebrating its 50th reunion. To the extent we thought about them at all, they were just old farts. But if we had asked, they could have told us about Woodrow Wilson’s presidency, progressive in every way but race, the horrors of World War I, or the post-war Red Scare, courtesy of our own A. Mitchell Palmer (class of 1891).
You probably think we’re old farts too, although, perhaps, you imagine the ‘60s as a rush of revolution fueled by sex, drugs, and rock & roll. In fact, we’re not very different than you. We came to Swarthmore in September 1963, shortly after the March on Washington at the end of August, which some of us attended. The campus buzzed with civil rights our first year. Scores of students went to jail in Chester in the first northern demonstrations. Later, there was a debate between two seniors – Carl Wittman (dead these many years) and Jed Rakoff (now a Federal judge in New York) – over the proper role, if any, of violence in the movement.
Schools outdid one another in sponsoring civil rights conferences. In one, at Connecticut College in New London, senior Mike Meeropol showed up with his guitar, belting out songs. I didn’t know anything about him at the time but remember his saying, “I’m from Swarthmore, and I’m proud of it.”
Back then, we had Collection every Thursday in Clothier, and students were required to attend. A speaker one Thursday was a South African official (perhaps the country’s UN representative). We loathed apartheid, but it didn’t even occur to us to demand that he be barred from speaking. Instead, we demonstrated outside Clothier, so he would be sure to see us when he was going in. One of the signs said, “Free Speech Yes/Apartheid No.”
Yes, things swirled. One Friday in November, though, everything stopped. On November 22, I was talking to upperclassman Jack Riggs in his room in Wharton when Mickey Herbert, a friend from high school, burst in and yelled “The President’s been shot!” My parents remembered where they were when they heard of the attack on Pearl Harbor, and your generation probably remembers where you were on 9/11. The assassination of JFK was our 9/11.
The war in Vietnam began under President Kennedy, and he may – or may not – have ended the war had he lived. Certainly Lyndon Johnson didn’t, and thousands of Americans and Vietnamese were dying. And unlike the wars you have known, many of our casualties had been drafted. So, men in college had a special reason to be skeptical, and men and women protested the war.
But we weren’t always marching. We listened – and danced— to  great music. The Beatles were on Ed Sullivan our first year, and “Satisfaction” hit the summer of ’65. Early on, Swarthmore had a folk festival, but it was supplanted by one featuring rock, and the Jefferson Airplane appeared at the rock festival on the group’s first East Coast tour. Finally, on the eve of our graduation, “Sergeant Pepper” came out.
There was no “Saturday Night Live” in our era. But the Smothers Brothers made their debut early in ’67, lampooning pomposity and resolutely anti-war. Blacklisted for 15 years, Pete Seeger came on to sing “Big Muddy” (“we were neck deep in the Big Muddy, and the big fool said to push on”). We knew who he was singing about.
Perhaps the class of 2017 has already been asked to decide on a class gift, maybe an oak to be planted or a bench to sit on. Our class gift was a protest. In our time, the college still had what was called the “sex rule,” a seldom enforced edict that forbade coupling by students on pain of expulsion. The rarity of its invocation did not make it any less troubling.
So we decided that our class gift would be the abolition of the sex rule. Of course, we lacked the power actually to abolish it, and then we left. But if you never heard of the sex rule, maybe you should thank the old farts in the class of ‘67.
I’m writing this in early March, just after President Trump’s first address to Congress. It’s too early to see how bad things will be – for example, whether the Republicans will fulfill their pledge to gut Obamacare, which brought healthcare to millions, or whether deportations will skyrocket. But it’s certainly not too early to fight to reclaim our country. We geezers are going to spend our retirement doing that, and we’d appreciate some help from you younger folks.
Sincerely,
Doug Huron ‘67