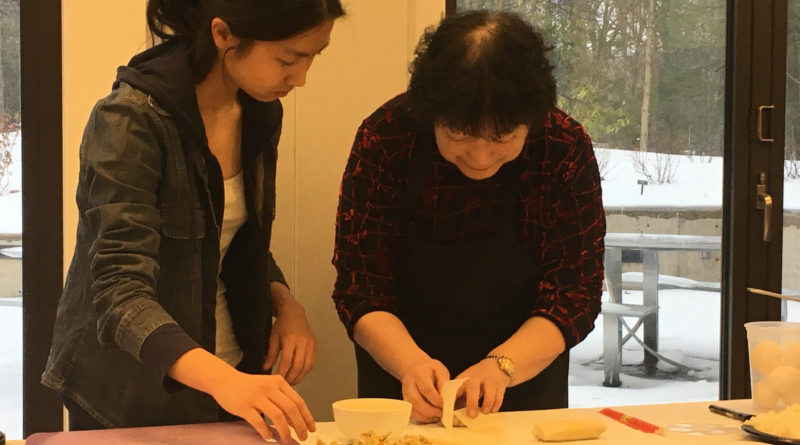 On any weekday, students form a line that stretches all the way across the Science Center lobby, clamoring to snatch up a container of Margaret Kuo’s Chinese food. Last Saturday, students had the unique opportunity to meet Margaret Kuo herself, in a cooking demonstration event sponsored by i20, an affinity group for international students.

The event was part of the ongoing Culture and Identity Appreciation (CIA) week. Student Government Organization (SGO) Chair of Visual and Performing Arts Josie Hung ‘19 described CIA week as a “space for celebrating heritage.” The Margaret Kuo event, she said, was “an opportunity to explore identity through food.”

“We felt that we could reach out and recognize [Kuo] for her service to our school,” i20 co-president Justin Mintah ‘19 said, highlighting Kuo’s thirteen-year-long partnership with Swarthmore College. According to Mintah, the event served to show students “how there are immigrants around the world who support our daily lives” and to give students an opportunity to learn about Kuo’s “successful business skills.”

Kuo began the event by describing her childhood in Taiwan and giving a quick overview of Chinese cuisine. She then proceeded to tell the story of her business.

In 1974, Kuo opened the doors of her first restaurant, located in a mall in Media. She was committed to serving “traditional Chinese cuisine” at a time when the general public knew little about Chinese food. She was ultimately successful in her venture; as of today, she operates three restaurants in the Philadelphia area, with a fourth slated to open in 2018.

Kuo credits her restaurant’s success to its “authentic” food. “I don’t serve anything I wouldn’t eat myself,” she said.

During the demonstration portion, Kuo demonstrated how to roll spring rolls and gave several students a chance to test out the technique themselves. She also prepared a simple scallion and pork fried rice dish and had her Japanese chef offer a sushi-rolling demonstration.

At the end of the event, students had an opportunity to sample other traditional Chinese and Japanese dishes, provided by Kuo’s restaurant.

The students who attended the event were noticeably impressed. “I really liked what Margaret had to say about culture and food and how to preserve [that culture],” Haochen Wang ‘20 said over a plate of Chinese food.

Through the event, students learned how to prepare several dishes, including some that are served at Science Center. To those budding chefs, Kuo imparted her most important cooking advice: “Start out with the best ingredients, don’t overseason, [and] taste the natural flavors.”