News » How are Swatties Voting This Year? An Unscientific Survey 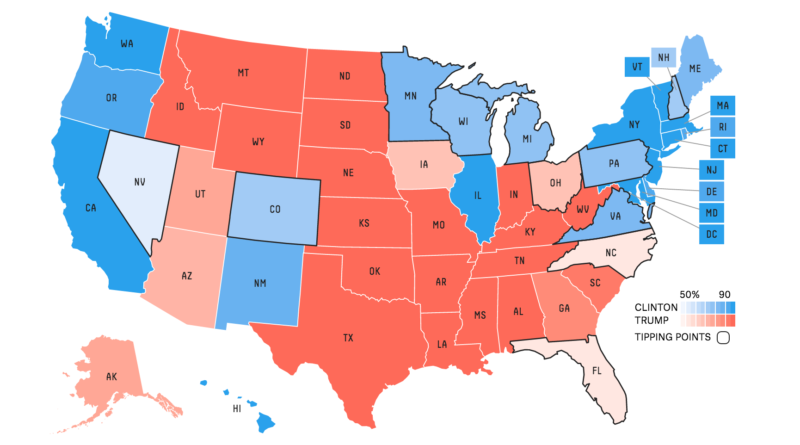 In an election year twist, Swarthmore College students heavily favor former Secretary of State Hillary Clinton to become the next president of the United States. Okay, maybe this isn’t all that surprising, but the data from The Daily Gazette poll of students still tells an interesting story about Swatties and their plans on Election Day.

After 136 responses from likely Swarthmore voters, Hillary Clinton leads her next closest opponent, Green Party nominee Jill Stein, by nearly 86 percentage points. Stein won 3.7 percent of the vote. Trailing Stein, Republican nominee Donald Trump and unaffiliated ex-CIA agent Evan McMullin each gained 1.7 percent of the vote. Finally, Libertarian nominee Gary Johnson and “other,” finished in last at .7 percent each. 2.2 percent of respondents were undecided. The margin of error was a large ±9%.

Given the relatively high uncertainty in our sample and low number of non-Clinton supporters drawing inferences from smaller subsets of our data is questionable, but now that we’ve warned you we’re going to do it anyways because it’s actually fairly interesting.

The Senior class was the least likely to support Clinton. Only 86.5 percent of Seniors supported Clinton out of 37 respondents.

The Junior class was the most supportive of Clinton. All 27 respondents supported her. Below is the breakdown of respondents by class year.

If we break down respondents by academic division we can see another interesting trend. Natural science students were slightly more likely than their classmates in the other divisions to vote for someone other than Clinton. The most popular second choice was Jill Stein at 5.5 percent. 54 students majoring in the natural sciences responded to this question.

Social science students supported Hillary at nearly the same rate as the average across the school. Each of the non-Clinton candidates gained one vote from social scientists. 52 students majoring in the social sciences responded to this question.

All 14 humanities majors who took the survey supported Clinton. Below is the breakdown of responses by division.

Currently, the presidential race is tightening. The American electorate is not in as much agreement as Swatties are about the future of the country. Nationally, Trump is trailing Clinton by just over 3 percent according to FiveThirtyEight’s election model and he has nearly a one in three chance of winning the election.

In Pennsylvania, the polls are not as tight but they are still within striking distance for Trump. Clinton has a little less than a 4 percent lead in the state and her odds of winning are around 77 percent, but dropping. Given the trend of this election so far, Pennsylvania may well be a toss-up by Election Day.

Current projections of the Senate race show McGinty and Toomey are still neck and neck. According to FiveThirtyEight’s election model, McGinty is only polling ahead of Toomey by around 3 percent and has a 76 percent chance of winning.

I haven’t yet answered the real question that every Swattie wants an answer to this year. How many souls at our hyper-liberal Swarthmore are willing to run the gamut and support Trump? Well, extrapolating wildly from the results of this survey, I would expect roughly 27 (give or take a lot) out of 1,581 students support Trump.

Feature image and “chance of winning” graphic courtesy of FiveThirtyEight.