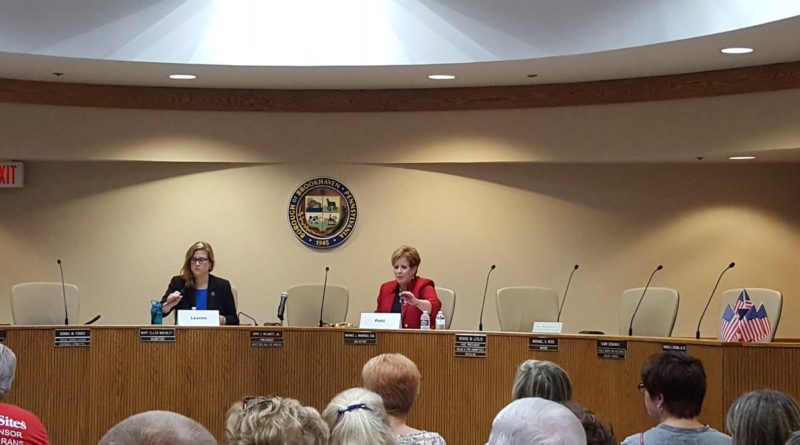 Last Thursday, voters from across Pennsylvania’s 161st State Legislative District gathered at the Brookhaven Municipal Center to listen to a debate between the two candidates running for State Representative. Leanne Krueger-Braneky, the current Democratic State Representative, is defending her seat against Patti Rodgers Morrisette, a Republican. The debate, hosted by League of Women Voters of Central Delaware County, came only 19 days before voters go to the polls on November 8th.

The event began with a joke from the moderator. Instead of using the candidates’ last names, the moderator noted that she was going to refer to them using their first names. “I would use your last names, but they’re just so long. I think that would get just a bit tedious for all of us,” she said. After this brief moment of levity, the candidates were put through a gamut of questions from the audience about topics ranging from police violence to the state minimum wage.

Throughout the debate, Krueger-Braneky came across as the more polished candidate. Her experience legislating in Harrisburg clearly gave her an advantage over Rodgers Morrisette. In one exchange, Krueger-Braneky showed off her policy knowledge by deftly explaining her problems with Pennsylvania’s tax structure and offering a dense set of potential solutions, including reforms to the state’s corporate tax structure and a severance tax on fracking.

While Rodgers Morrisette came out on the losing end of a few exchanges and never truly caught Krueger-Braneky off guard, she still generally held her own in the debate and outperformed expectations. Coming into the debate, Rodgers Morrisette was an unknown commodity because of the relatively short amount of time she has spent in politics. Not much was known about her because she has shied away from cameras and avoided putting many of her policy positions on record. In fact, her campaign canceled a scheduled interview with The Daily Gazette.

Rodgers Morrisette was clearly a step behind Krueger-Braneky throughout the debate, yet she still showed a solid understanding of policy. This was especially evident during her answer to a question about public sector pensions. Rodgers Morrisette described the deficits in the state pension system, proposed a privatized alternative, and then fended off an attack by Krueger-Braneky by explaining her preferred funding mechanism for the change, a similar severance tax on fracking to the one Krueger-Braneky supports.

The few times Rodgers Morrisette stumbled and oversimplified issues, Krueger-Braneky was quick to call her out. In a discussion of the privatization of state liquor stores, Rodgers Morrisette argued that state run liquor stores were part of an “antiquated system,” jokingly pointing out that she is especially in favor of privatization because the state government had closed the liquor store near her home. Krueger-Braneky responded immediately by pointing out that the issue was far more complex than Rodgers Morrisette was making it out to be. While Krueger-Braneky said she was totally in favor of more convenient liquor sales, she argued that privatization was not the way to solve the problems with the state’s monopoly on sales. She noted that selling off this asset would shrink the state’s general fund, making education and healthcare spending more difficult. Krueger-Braneky also claimed that state liquor stores would be sold to Wal-Mart and other large multinational corporations that may not have the best interests of consumers at heart.

In one of the tensest moments of the debate, Rodgers Morrisette attacked Krueger-Braneky for voting against legislation that would have increased the penalty for home invasion. Rodgers Morrisette described a home invasion that happened two weeks previously in Middletown Township and tied it into her attack, specifically pointing out that Krueger-Braneky had essentially voted to reduce the potential sentences of the perpetrators of this crime. Rodgers Morrisette seemed to have the audience on her side after the attack until Krueger-Braneky turned the exchange by arguing that the legislation she voted against would have cost $25 million to implement and used unconstitutional mandatory minimums. Krueger-Braneky said that she’d much rather put the responsibility of sentencing in the hands of local judges than give it to Harrisburg.

Despite a few heated moments, the debate ended on a relatively light note. In her closing statement, Krueger-Braneky pointed out the contrast between the state representative debate and the presidential debate that happened the night before. “This was such a cordial debate, unlike the one that just occurred on TV. Maybe that’s what happens with two women on stage,” she said.

After the event, reaction was decidedly split. One Swarthmore student in attendance, Jordan Reyes ’19, commented that Krueger-Braneky was the clear winner. “She showed skill and experience. Her arguments had substance and she clearly knew what the important issues were,” he said.

In contrast, a local resident, Les Berry, thought Rodgers Morrisette came out on top. “Patti won because she supports what I support,” he said. Berry pointed out that defending the 2nd Amendment is one of his top priorities. He was put off by Krueger-Braneky’s attacks on legislation that would standardize gun control throughout the state and override local regulations.