Opinion » Op-Eds » Care for one another 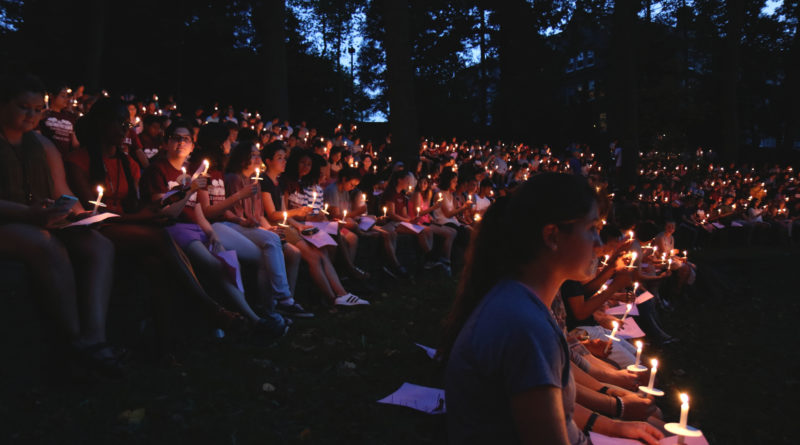 We hear this maxim as we first step on campus. We follow it, or we are expected to, throughout our years. Yes, it is stale to hear. Yes, it is tiring to repeat. Yes, it is easy not to do.  “Care for one another.”

I grew up just north of the Capitol in DC at a Jesuit high school. During school, friends all too often found me at every corner of the theatre, planning and preparing lights for our company’s next production. All that time in the black box left me as pale and thin as I have ever been—which, admittedly, has been my whole life—not unlike a plant left out of the sun for too long. I fell into that classically American mentality of working my fingers to the bone without any consciousness to my body, and the only reason I came out of that black box was because others were conscious of me.

Caring for others produces two primary goods. The first is quotidian—it builds trust and an emotional support network for openness and honesty, so people can live healthfully and give to others. The second grows out of the former. By building that empathetic network that encourages sharing and solidarity within the student body, the community is strengthened, it can better perform what is expected of it, and it will achieve the goals it sets for itself.

Let’s return to the theatre. When my friend Mike and I would construct a set, we were sure to brace and scaffold the structure as it went up, adding reinforcements where we could to include more stability. I would push back on a two-by-four as he drilled a screw, and he would hold the base of the ladder as I went up into the rafters to paint. Soon enough, the set reached into the loft, ready for opening night.

What Mike and I gave to each other was strength for the trying times when a screw would hit a wood knot or wood arrived at the theatre warped. We kneaded out the problems and moved on in construction.  Of course, we would always check back to make sure those issues were at rest. Those guarantees and consistent check-ins allowed him to fly set pieces in the loft and allowed me to play more with lighting angles on more complicated sets. Our nine productions together were better off because our problems never fermented in the dark.

Similarly, at the college, we can act together to guarantee that students experience school’s academic rigor or Saturday nights or the newspaper in a way that maximizes the cultivation of ever-learning minds, for the benefit of all.

From my short month on campus, I have already seen the great capacity students have to smack injustice and raise each other up despite adversity. Most readily, students might think of last week’s inflammatory, hateful, and misinformed piece that degraded and dismissed low-income students. Instead of allowing those heinous thoughts to fester, low-income students took the lead against that rhetoric, and many students worked to ensure those voices were heard and remembered. Now, the community is more aware of the concerns of low-income students, and it is essential that the college work to improve the conditions they face.

Okay, I will hedge some bets. People should not be wholly reliant on others to promote their wellness. I could not hold my ladder and finish the paint job at the same time. We each hold agency to work for our own benefit as long as it does not infringe on others’ well-being. Further, those warped beams are sometimes within ourselves. We need to be courageous enough to confront them in ourselves, to ask more of others, and to be open to the bracing and bending of productive conversations and efforts to fix those structures. Lastly, our environment at Swarthmore is different from the previous stages of our lives, and this environment may have expectations and goals at odds with what we have come to know.  That reality, however, does not excuse us from lighting up this place through solidarity with one another.

And that is where I find the issue. Even at Swarthmore, where students are generally sensitive to one another’s needs, there can be a complacency or lack of drive to work for others when we have so much to handle ourselves—after all, self-care is also expected of us as adults.  That goal is worthy of our time because, like I said earlier, we are responsible for ourselves.

The Jesuits have a saying, and I will paraphrase it here: “Work to be people for and with others.” Mike and my other friends embodied this goal. I spent most of my time working and developing my design in the theatre, but I often neglected myself because of it. Food was optional, even on 18-hour days. Work always came first. The only light I saw from early October to late March was from my computer screen and what blasted from the theatre lamps onto the stage, because I was at school before the sun was up and after it was down. My company did not let me act this way.

Friends would pull me downstairs for dinner and would force me to eat seconds. A five minute break from work to catch up was a constant. Short walks became one of my favorite things because I just had to see the sunset when friends dragged me to Starbucks after school. I was better for their help, and I aimed to give to them back then and now.

Because I was healthier and more conscientious, I was more aware of my abilities and tasks, both as a lighting manager and as a friend. I was still there at seven a.m. every Saturday and Sunday, but I was more emphatic when talking to others I did not know as well. I had new zeal for my work, which I developed further because I knew how much happier I would make others during a performance. I was fuller, and so were my productions.

Swarthmore should be a place like my theatre company was for me. We are more related than we might expect from the everyday, so we should be generous with ourselves to make sure each person is more capable of being generous to themselves. We each have the ability to help one another, so why would we not take advantage of that opportunity? We are capable of helping each other reach our highest potential.