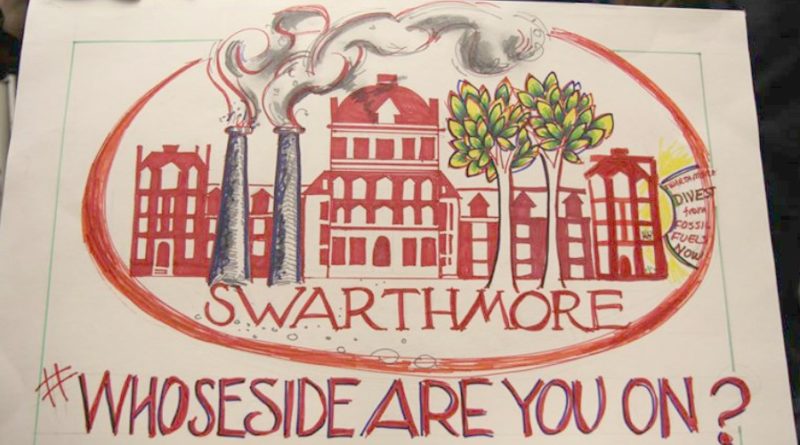 This past weekend, the Board of Managers at Swarthmore College approved an internal charge on greenhouse gas emissions. We should mark what appears to be an initial step toward developing a carbon pricing model. However, while welcome, the plan is no alternative to divesting the institution’s $1.9 billion endowment of fossil fuels.

I have had the privilege of both co-authoring the white paper that underpinned the faculty resolution calling for divestment and joining the working group that developed the proposal for the new carbon charge plan. As I write this column, it is not yet clear to what extent the Board adopted the working group’s proposal, but let’s assume for now that congratulations are in order all around! The plan was designed to collect a fee from each department to begin registering the social cost of each metric ton of carbon (or its equivalent in various gases) that the college emits (limited for the moment to the physical plant, electricity use, and emissions associated with planned construction) in order to fund sustainability projects. It also calls us to bend our intellectual energies toward better understanding the social costs of carbon through our teaching, learning, and research and then apply our growing knowledge to the pricing scheme. Why is all this important? It urges us down the long road of building sustainable infrastructures that will be necessary, if we survive the climate crisis.

However, the carbon charge leaves invisible the role of investment capital in sustaining an industry that is playing a dangerous profit-fueled game with our futures, a game that we underwrite and legitimize with our investments. It leaves unexamined the strange fiction that the only appropriate metric for assessing financial investments is financial return, a position that wouldn’t bear scrutiny in most, if any, Swarthmore classrooms. Yet, it is enshrined in the Board of Managers’ 1991 guideline that the “Investment Committee manages the endowment to yield the best long term financial results, rather than to pursue other social objectives.” Do we really believe that our current investments have no impact on social conditions?

Alone, the carbon charge assumes that we, consumers of fossil fuels, are solely responsible for the dilemma in which we find ourselves as a species. Don’t get me wrong, we do bear responsibility, and the new initiative is a step in the right direction. However, we also know that corporations go to great lengths, through marketing and lobbying, to shape the political, social, and economic landscapes in which they operate. Rest assured that while we try to diminish our consumption, fossil fuel companies on the Carbon Underground list will be using our investments to make the task as difficult as possible.

The new carbon charge plan also assumes there is a glide path of declining consumption that can keep global temperatures below 2 degrees Celsius (never mind 1.5 degrees). Sustainability initiatives funded by the carbon charge should be undertaken for the long term common good, but to address the climate crisis, they would have been more appropriate thirty years ago, when the public became aware of global warming. Unfortunately, as the fossil fuel industry actively suppressed climate science, we let those decades pass, and we now find ourselves in a catastrophically difficult situation.

Now, robust intervention is necessary. The mitigation scenarios that could keep global temperatures within 2 degrees Celsius require carbon sequestration technologies that don’t yet exist and a global price on carbon to have been agreed in 2010. Consequently, we need direct regulation of the extraction of fossil fuels accompanied by massive support for research and development of alternative energy, humanitarian aid, and preparation for climate impacts in vulnerable areas.

Through divestment, the college can join other institutions and use its privileged status to signal to world leaders that they can and must take bold steps to regulate the extraction of fossil fuels. Millions of vulnerable people are at severe short term risk (estimated by DARA and the Climate Vulnerable Forum at 6 million per year by 2030). Even the college itself is under threat.

Our students have already done the heavy lifting by launching and building an effective global campaign. We know this because our college representatives at the COP21 summit in Paris reported back that UN President Ban Ki Moon cited the importance of the divestment campaign as part of “a rising global tide of support for a strong, universal agreement,” declaring, “All of us have a […] duty to heed those voices.” Faculty, students, many alumni, and at least six distinguished honorary degree recipients understand President Moon’s perspective, and I expect some managers on the board do as well. After all, the optional Green Fund that the board established for new donations signals that the 1991 guideline is not water tight.

For those in civil society with cultural and economic capital, divestment remains an important tool in our toolbox, and we have a responsibility to use it. As we publicly demonstrate to our political leaders how to say no to fossil fuel companies, we should press them for an ambitious global carbon price, restrictions on fossil fuel extraction, and a plan to freeze the development of new reserves.