Opinion » Op-Eds » A letter from Princeton to Swarthmore 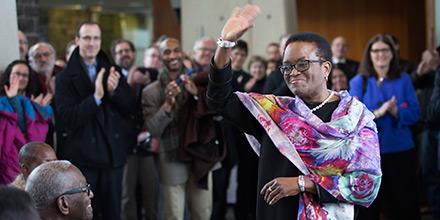 I have to admit, I’m still not quite used to the title “President” in front of Valerie Smith’s name. It’s not for any other reason than the fact that I always knew her as my professor at Princeton University and seeing the title “President” stirs feelings of nostalgic gratitude for the impact Professor Valerie Smith had on my college experience. Looking back on my four years at Princeton, I wish I’d had the chance to thank her in person, but amid the frenzy of senior year I never had a moment to do some serious reflection on the great people who helped me get to graduation.  While most people in my situation would write a thank you card, I’ve come to the realization that what I’m thankful for can’t possibly be covered in a simple card. So in the spirit of the upcoming Thanksgiving season, I am sharing my deeply personal thank you note, with the hope that it offers Swatties an insightful glimpse into your new president beyond her numerous accolades.

Allow me to dial the clock back a little bit.

Having just graduated from college this June, I would now wager a good chunk of my government salary on the fact that there aren’t many people who can honestly say college is a smooth-sailing experience. We all experience our fair share of struggles, ranging from academic uncertainty to friendship problems to identity crises. At Princeton, the struggles of choosing the right major, the desire to feel adequate alongside impossibly impressive classmates, the social pressure over joining (or not joining) an eating club, and the stress surrounding the year-long process of writing the grand senior thesis — these challenges are common themes in the Princeton experience.

No doubt my own experience was filled with many bumpy roads. Academically, I struggled to choose a major, deciding last minute to major in English based on my love for books and rap lyrics. English literature was never something I was naturally good at, but it was what I loved; consequently, I always doubted my place in the English department. For a while I was stuck in a vicious cycle where I doubted my decision to major in English, which led me to question my academic abilities, intellectual curiosities, and eventually even my personal life choices. Perhaps some of you can relate to the general struggle?

With this cycle of self-doubt, I was particularly nervous about my English junior seminar — a requirement for all English majors in junior year. My seminar was taught by none other than the dean of the college at the time — Professor Valerie Smith — and I walked into the first day of seminar fearing the inevitable class where someone as highly-regarded as Professor Smith would think I didn’t belong in the English Department.

It goes without saying that by no means was I Professor Smith’s best student. Given this, it speaks volumes that I never felt more comfortable academically than with Professor Smith. My crazy idea about wanting to write my big junior paper on how Toni Morrison and Jay-Z were participating in the same vein of “literature”? Not a problem for Professor Smith — she embraced and encouraged my ideas. It was the deepest testament to her innate ability to bring out the best in everyone, to encourage creativity and intellectual curiosity, even when it pushed the boundaries of what might be considered acceptable, standard, or traditional.

For that I owe Professor Smith a lot, more than she knows. Maybe, even more than I know and appreciate at the moment. What I do realize now is that she gave me the confidence to fight for myself, my ideas, my creativity, my place at Princeton, my future. She quietly built me up and validated my intellectual challenges. And in doing so, she provided me with a positive academic environment that in turn allowed me to finally make peace with some of my deepest struggles, to let go of my accumulated self-doubt, and to fully reconcile with my own self — all things that eluded me for the majority of college.

I was fearful I would graduate without having this reconciliation, that I would carry the weary burden of having continuously questioned and doubted myself for four years. But Professor Smith’s simple encouragement and validation of my academic pursuits gave me the confidence to graduate knowing that I fought for myself on all fronts and that I truly explored the full depths of my humanity. I thank her for her role in building me up to the realization that just because I emerged on the other side of four years with bruises, doesn’t mean I was defeated. That, in fact, it meant I was stronger, more determined, more mature, more human, and much more ready to take on the world after graduation.

Now — five months after graduation — I’ve had the time and distance to honestly reflect on my college experience, and it really could be summed up with the ubiquitous Dickens quote: “It was the best of times, it was the worst of times.” And like most life experiences of this nature, it’s often hard to pinpoint what exactly could have been done differently. But in hindsight, there is one real moment of clarity for me. If I had the chance to do college all over again, at the first opportunity I would have gone knocking on Valerie Smith’s office door and said: “Hi, my name is Monica, and I would really like to get to know you.”

So, Swarthmore: my own gratitude comes post-graduation, but here’s to hoping my reflections allow you take full advantage of Valerie Smith at your first opportunity. Don’t hesitate to go knock on her office door, set up a time to talk to her, wave to her on campus, tell her about your academic passions, or your ideas for making Swarthmore better. I only had the privilege of knowing her as my professor, but I already know she’ll make one heck of a president.