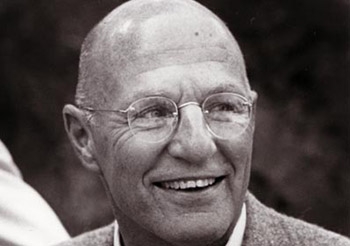 In Remembrance of a Sportsman, Jerry Kolhberg ’46 from his friend, Mike Mullan

This summer, in early August 2015, we lost Jerry Kohlberg ’46 as he passed away at age 90.  Please allow me a few words on the life and times of “Mr. K,” a man of high achievement in the world of finance, a generous benefactor to Swarthmore’s campus and people, especially our students, an intellectual at heart and a sportsman.

I met Jerry my first week at Swarthmore in 1978 on the tennis court, naturally, and it was a good meeting that lasted a lifetime.  We had many fond times playing tennis together after that as well as many meaningful conversations.  Our games were always laced with friendship, banter and humor with a well-concealed competitive bent typical of the Kohlberg style and approach to sport and life.

Jerry came to contribute to our sports programs at Swarthmore, his name buried behind many needy projects, the track and weight rooms and naturally the Mullan Tennis Center, a construction he faithfully pursued and financed.  Jerry also sponsored the addition of a fitness center when we had none at the College, understanding the need for exercise facilities for all students to temper the strain of intense intellectual pursuits.  Mr. Kohlberg eschewed any public attention to his gifts with the one exception of Kohlberg Hall, a project those close to him convinced him to rightfully claim in a public way.  I was naturally flattered to be associated with the tennis center, but, given Jerry’s penchant for modesty, not surprised that he chose to remain in the background, attaching my name to the tennis building, honoring a simple coach and teacher of the sport he loved.

Jerry was ambitious and accomplished but he never celebrated achieving in sports — winning — and during the years when the men’s tennis team won championships, the end-game was hardly mentioned, the trophies best tucked away for private remembrance. It was as if he knew that the rewards and lessons of intense, college-level sport were all internal — small tests of physical skill and exertion, the required allegiance to team, adhering to a sometimes elusive sporting code of decency and respect for others, and the overcoming of personal doubts and fears in and through athletic competition.  The only comment Mr. K ever delivered to me was his fondest wish that our students would simply be sportsmen on the court, followers of a traditional style of sporting honor bequeathed to him in his youth and at the college, and too often ignored in contemporary sport competitions.

Jerry always found time for tennis; he was a wily player who used his skills to the max, did not have much of a serve but had a deadly forehand, serviceable volleys and, naturally, plenty of stamina to make it through to the end.  He seemed to approach tennis and sport as an intellectual puzzle — the strokes maddeningly difficult to master and maintain, the quick movements to the ball and back an aesthetic opportunity, the required focus on task essential to performance a necessary if often fleeting component of the game, the competition with the self to say nothing of the opponent, the ultimate challenge.

And, for Jerry, it always came back to Swarthmore, his college during the days of great doubt in World War II, a quiet college campus for his studies but also a place of the imagination where egalitarian principles and people mattered. As we take the courts and fields this year, train for the coming contests and work on our skill, strength and stamina, let us pause for a moment and remember, praise and be inspired by the lifework of our departed colleague and sportsman, Jerry Kohlberg ‘46.