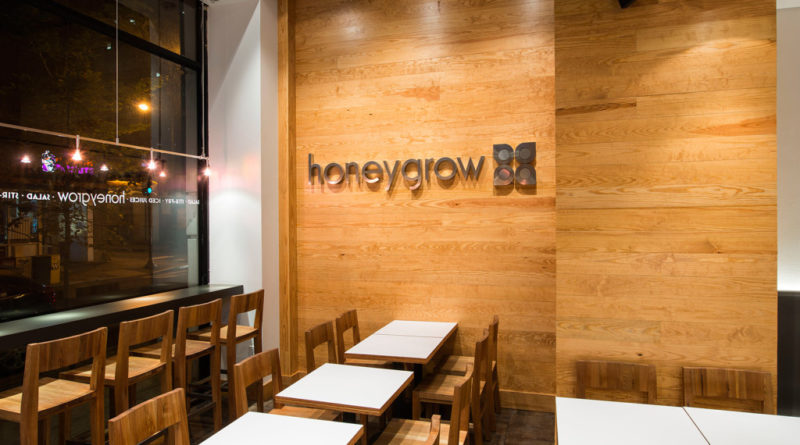 Honeygrow, stylized as “honeygrow,” is a restaurant that “has been having people come together over wholesome foods since 2012,” according to their website. Currently, the nascent chain has a very impressive three locations, one in Radnor, one in Bala Cynwyd, and one in Philly, plus two to open in the next six months. While I was in Philly over break, I was on my way to review Oyster House when I passed by Insomnia Cookies and then honeygrow; I was instantly captivated by its lowercase æsthetic and decided to review it instead, since Insomnia Cookies isn’t technically “food.”

I was also influenced by a friend, who professed after getting into the city that she disliked oysters. I regreted this decision.

Trying to capitalize on the eco-modern healthy lifestyle craze, honeygrow was 90 percent made of bright, shiny softwood planks. Entering, a greeter told me that I could order at an electronic kiosk. “The options are all logically laid out, but if you have any questions, I’m happy to help!” she reassured me. The walls, tables, stools, and chairs shone with the suggestion of sustainability.

Although honeygrow offered several pre-made dishes, it also allowed you to create a personalized salad or stir-fry. I attempted to customize their smoked oyster stir-fry — no real oysters, only oyster sauce — but I was immediately confused after switching the “naturally raised pork” that they had run out of for some shrimp. “Do you want extra protein?” the screen blinked, and I was left wondering if I had accidentally kept the nonexistent pork selection or if the machine was trying to offer me beans.

After making sure I had made the correct selection, I added some cilantro to the already-included organic baby spinach, broccoli, scallions, and bean sprouts. The total came out to just under $9 plus tax. I was curious, so I exited the whole process and tried to create the combo again from scratch. Oddly, this came out to about $9.50 plus tax, so if you do go to honeygrow, it’s probably best to customize a combo rather than try to make your own.

The kiosk also offered a kale-banana-pineapple-mint smoothie to me for $6. Kale, banana, mint. Six dollars. I declined.

The kitchen area was open — while I normally appreciate this feature in a restaurant, honeygrow’s Philly location was maybe the size of Paces, and there were eight people working behind a foot-tall glass half-wall. It was slightly deafening, and we actually missed our number being called after sitting down.

Although honeygrow seemed moderately busy, I couldn’t help but wonder why everyone was there. Sure, the décor was tailored to attract every environmentally-minded hipster in the city — maybe that was it. The price seemed appropriate for the amount of food, but so are McDonald’s medium fries.

My recommendation: oyster sauce and bean sprouts cost less than $9, and you can get both from most grocery stores — go there instead.