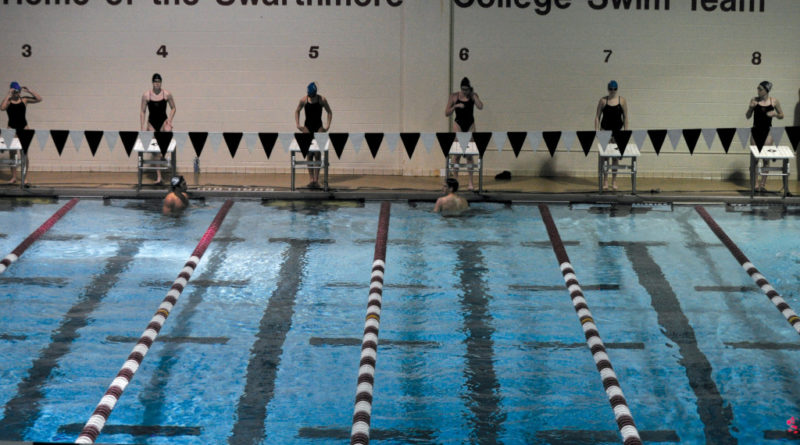 It’s that time of the year, once again, where the seasons change along with the sports. With the fall sports winding down, we welcome the winter sports into the spotlight. For the men’s and women’s swimming teams, the season is already in full swing.

Kicking off their seasons on Garnet weekend, the swim teams have already hosted two Conference meets and have their third coming up this weekend against Rowan University.

Andrew Steele ’17 and Carlo Sivilotti ’18 were also big in the win, as both were part of the winning medley relay team. Sivilotti finished first in the 50-yard freestyle, and Steele earned the top spot in the 100-yard butterfly.

If it’s not obvious already, the men’s team is relying heavily on a crop of young talent. “I’d say the biggest factor [in meets] has been the strong performances by the freshmen class. They’re a fast group of guys and are already big-time contributors at meets,” says Steele.

The women also had a dominant performance against McDaniel, winning their meet 130-69. Unsurprisingly, a big reason for the win was due to the talents of Kate Wiseman ’15 and Supriya Davis ’15, two of the best swimmers on the team. Wiseman had two individual wins, Davis had one of her own, and both swam on the winning 200-yard medley team.

Sydney Anderson ’18 made a big splash as well, winning both the 500 and 1,000-yard freestyle events.

It was great for both teams to get wins coming out of the gate. They both put a lot of effort into getting ready for their respective seasons.

Remarking on the team preparation, Wiseman said, “We start pre-season practices as soon as classes start, and we definitely hit the ground running. We’re also doing a more organized team lifting schedule this year with Eric Hoffman [the strength and conditioning coach].”

After their big wins against McDaniel, the teams hosted F&M the following week. The women would go on to lose their meet 78-127, but they still saw strong performances from some of their younger swimmers.

The men’s meet proved to be a bit of a nail biter. The meet came down to the last event (400-yard freestyle relay) in which the team needed to place first and second to win. The Garnet ended up finishing first and third, leaving them just one point shy of the victory (102-103).

Fitzstevens was strong once again, capturing two individual wins. Michael McVerry ’16 was also a big factor in keeping the meet close, contributing a first place win in the 200-yard butterfly.

With their performances thus far, both teams are looking forward to the upcoming season.

The men will have to rely heavily on the freshman and sophomore classes and will have to compete without their senior captain Sam Tomlinson ’15, who is out for the season with an injury.

Steve Sekula ’17 commented on his absence saying, “His leadership is still strong at practice and meets, but we miss his presence in the water — especially on relays.”

However, “the freshman class has been real strong. They’ve added a lot of depth to the team, especially in freestyle and breaststroke. There’s a lot of competition within the team also, which pushes us to always be at the top of our game,” Sekula added.

For the women, the key will be consistency and coaching. “We have to be consistent, especially in practice, with our focus and intensity. Lifting is a great chance for us to get significantly better. We have to stay focused from now, when it feels like Conferences is ages away, all the way through training trip and Conferences,” said Wiseman.

No matter how the teams do this season, it will all come down to the Conference Championships in February. Each individual will be swimming for the chance to make it to NCAAs and both teams will look to prove the coaches wrong by finishing higher than where they fell in the preseason poll — fifth for the women and sixth for the men.