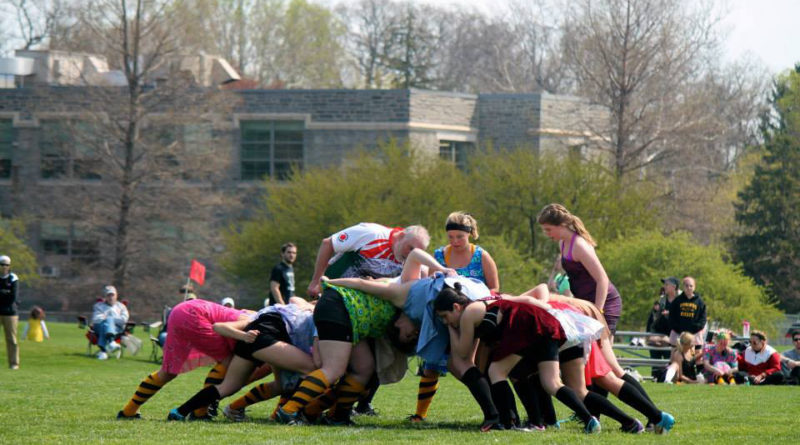 But that’s because at 6’6 and 205 lbs, Kobe would tower over a scrappy Swarthmore team that prides itself on its wits and speed.

Lets rephrase the question: If basketball were played like rugby, would Bryant still be one of the greatest players of all time? The answer is a resounding no.

According to Razi Shaban ’16, a right wing on the men’s team, “Rugby’s the only real team sport….[it’s] more about the system of people than it is about each individual player. So you can have a star player in a lot of different sports, but in rugby, if you have a star player and fourteen bad players, you don’t make a good team.”

A ball hog like Kobe Bryant would never be able to succeed in a game as cooperative as rugby. That’s because rugby is a game of constant passing. The objective of rugby is to score as many “tries” as possible. A try is like a touchdown in football. Except once the player enters the end zone, he or she needs to touch the ball to the ground. Only then can the points be awarded.

Unlike football, however, the players are not allowed to pass the ball forward; they can only pass backwards or sideways. It’s necessary to be very precise when passing the ball because the games are played fifteen players on fifteen, so more often than not, an opposing player will be within the passing vicinity. Not only will the opposing team try to defend the pass and recover and intercept the ball, but also they will try to tackle the offensive player with the ball. If they succeed then the defense will obtain possession.

No rugby player, not even Kobe, can elude a 15 on 1, which is why it’s vital that all the players play as a unit. In fact, many rugby players adopt the motto “fifteen as one” — emphasizing how important playing as a team can be.

“No one person can win a rugby game, it’s about the whole team working together,” Shaban acknowledged.

Co-captain Averill Obee ’15, a second row and an eight said, “In high school, I never felt completely on whatever team I was on, but on rugby I’ve always felt like I was part of the team. The upperclassmen have always taken care of me and a lot of my best friends today I met on the team.”

One reason the rugby teams are so close-knit is that the strict position structure of the game doesn’t allow any room for mistakes. Each player owns a niche on the team. Like a well-oiled machine, the team needs every player to hold his or her own. If any player doesn’t carry out his or her role effectively, players will be left exposed and the team’s opportunities to move the ball will significantly dwindle.

The two captains on the women’s team, Carolyn Corbin ’15, a scrum half, and Obee, emphasized the importance of unity.

Obee said, “You can really tell the difference between when you are playing with 14 players compared with the full fifteen. Not having one person there leaves a hole on the field that’s not easily covered by the rest of the team. It changes the game play because each position has a really specific role.”

Just as Obee referenced, one of the reasons so many players on the two rugby teams have such great things to say about their respective team is that each focuses on togetherness. Perhaps one reason the teams are so close is that they share a common bond.

Shaban noted, “Rugby isn’t a big sport in the U.S., it’s up-and-coming, so it’s like we all share a passion.”

Just by being on the team, every single member automatically takes on a burden that’s larger than the league games or the practices. They each represent the sport as a whole. And in order to embody a sport with such a large emphasis on team play, it’s almost impossible not to come together as a team.

But the pastime and unity shared by playing transcends team boundaries. After the 80 grueling minutes of the match conclude, the two teams often have a barbeque together after the game. In fact, because the teams see the same players over and over again at the barbeques, many of the seniors admit to even developing friendships with some of the players on the other team.

In addition to having games on weekends, the two teams each practice three times a week at Cunningham Field (behind Mertz and across the road). This Saturday, September 27, the Swarthmore men’s team is hosting a four-team tournament, which represents a great opportunity to see what Shaban deems the “true” team sport.