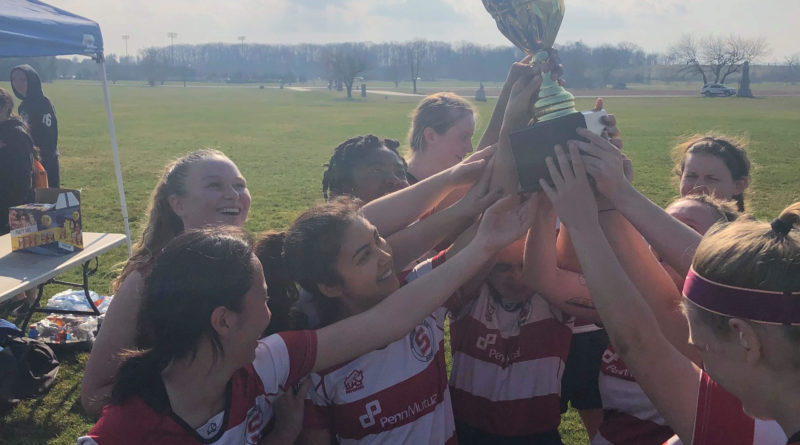 Unsuspecting Swarthmore students who find themselves on Parrish Beach just after 6:30 p.m. on Fridays can, if they’re lucky, catch a glimpse of a pack of mud-covered people moving across the field towards Sharples and singing. Who might these hooligans be, taking synchronized swigs from their water bottles and shouting about how Wednesday is a hump day? None other than the Swarthmore women’s rugby team of Sharples poster fame, the weirdest and most lovely group of stone-cold badasses I have ever known. Here’s the story of how I became one of them.

During orientation last fall, sweaty and stressed and wondering how, exactly, I was supposed to make friends when I’d spent the entire summer scooping ice cream — and therefore talking only to small children, the elderly, and drunk high schoolers — I went to get lunch and was ambushed by two seniors who were tabling. They wore matching jackets and were holding an egg-shaped ball and, smiling diabolically, asked me if I wanted to join the rugby team? Having not yet developed the protective layer of disinterest which many Swat students assume around tabling groups, I laughed and told them that I’d never played a sport with a ball in my life. They told me that didn’t matter and, shrugging, I put my name down. Sports teams make me nervous, as a rule, but I’d played roller derby all through high school and rugby people seemed like they were cut from the same chill, queer, slightly frightening cloth as the derby people I grew up around. I figured I’d go to a few practices, see what happens, and decide from there if I wanted to keep going.

This is what being on the women’s rugby team is like: for three afternoons a week, every week, you fling your body into other people’s bodies. You run laps with your teammates and do dynamics, warm-up exercises with names like “henpecker” and “open the gate”; if you’ve never done dynamics before you will be baffled by them and fall constantly during ACL hops. You will mutter “Frankensteins, airplanes, Frankensteins, airplanes” to yourself while your teammates wonder whether you’re a human or a badly-programmed robot someone stuffed into leggings and snuck onto the pitch. Rugby flings you into a world of rucks and basket hands and lineouts, and even after having each new term cheerfully explained to you it’s impossible to figure out why, during said lineouts, rugby is transformed from a contact sport into a contest of which team can lift a player up in what can only be described as a giant aerial wedgie. You go to team dinners and dry events and after-game socials, all of which meld together into a blur of card games and laughter.

You are not going to be good at rugby at first; I’m still not sure that I am. I still drop the ball every third time it’s passed to me, and have not rucked successfully in a game without falling over. I’ve taken to cataloguing the bruises I collect after each practice by color, location, and size.  But I feel so much more settled in my body now than I used to. My arms and legs are more solid — I can run without hyperventilating. On days when I can’t get my brain to settle and pay attention in class, rugby practice forces me to be aware, to strategize, to talk to my teammates or else risk falling on my ass.

I don’t want to sound like a cult member or, god forbid, say that exercise is the key to good mental health (it’s not). But the amount of good that rugby has brought into my life since I joined is astronomical. Over this first year at Swarthmore the women’s rugby team has been my rock, my home base, the most reliable producer of uncontrollable belly laughs, bruises, and questionable early-afternoon beverage choices (yes, I did drink from my captain’s sweaty cleat the first time I scored a try, yes, I was the only team member brave/foolish enough to try the Swiss ale we’d found in the Kohlberg Panopticon room, yes, it tasted like liquified fermented oatmeal, yes, I’m sorry Mom). Swarthmore women’s rugby players are more powerful than God. They have thighs of iron and nerves of steel. They are writing their theses and running miles before practice and RAing and applying for jobs and attending conferences and living their lives, and still they drag themselves out onto a field of grass and mud to play this game together. They played five games in our regional championships and WON.

So many people on the rugby team are graduating this semester. I don’t quite know how to deal with that fact, not yet. I’m going to miss them. But I tabled with the team at Swatstruck last week and offered prospective students candy out of our trophy, asked them if they wanted to try a jersey on for size, and smiled at them. Maybe some of them will come to practice, and maybe they won’t. But either way, Friday afternoons next semester will still see a singing pack of rugby people — my singing pack of rugby people — stumbling Sharples-ward to get something to eat. You could join us, if you’d like. Muddy clothes, much like a decent singing voice, are not required.