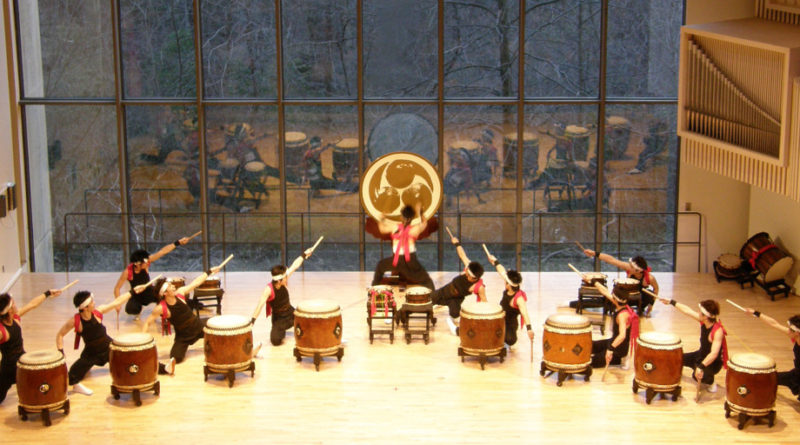 Taiko is a form of art and music rooted in a Japanese tradition. It uses the rhythmic and synchronized drumming of a group of performers to create an elaborate display of sound and motion. The effect is an exuberant and energetic performance. Since 2003, the Tamagawa Dance and Taiko group has performed on the  stage of the Lang Concert Hall. If you haven’t attended in the past, you may know them by the reverberations their drumming sends through the building.

Ever since it’s first performance, the Tamagawa Dance group has been a highlighted attraction on campus. The Lang Concert Hall has been filled to capacity at each performance. It is so popular that each year, about one hundred to two hundred people must be turned away.

The event’s popularity is not surprising to Arrow, who claims that “Taiko is powerful in its subtly as well as its explosive qualities; the dancing, based on fold and classical Japanese dance is innovative, joyous – and costumed.” It is a powerful form of both music and dance, but it also offers considerable spectacle, which lends Taiko a magnetic power for audiences.

Ethan Bogdan ‘14 is a Taiko student at Swarthmore. In previous years, he has been one of the first in line to go to the Tamagawa performance. Bogdan is enthusiastic about Taiko and has been incredibly impressed each year. He says,  “These students hold themselves to incredibly high standards of physical skill and artistry, and each year they deliver creative and surprising new variations on an incredibly effective formula.”

While Japanese drumming is an ancient practice, Taiko developed in the World War II era. Importantly, while occupational discrimination was abolished in the 19th Century in Japan, social discrimination against burakumin (outcast groups including taiko makers) still exist today. Modern Taiko has been used by some of these formally outcast groups as a means to build identity and legitimacy.

As well as the yearly performance, the Tamagawa group has left a lasting effect on the Swarthmore community. Arrow says that the director of the Tamagawa Dance and Taiko group has had a significant impact on the development of Taiko at Swarthmore. Taiko is a dance class available to Swarthmore students. Students, who receive credit for their work, practice all semester for a final performance piece at the end of the semester. This program has been influenced by several of the many Taiko styles that exist; however, the director of the Tamagawa Dance and Taiko Group, Isaburoh Hanayagi, has had a large impact. Isabuoh has inspired many of the performances, taught several workshops and masterclasses, and has arranged for Swarthmore to own fourteen of the Tamagawa drums.

The upcoming Tamagawa Taiko performance, if like those of previous years, should be an incredible show. Arrow is confident it will be “like no other performance anyone is ever likely to see.” Students like Bogdan look forward to attending the show again this year. Bogdan says “ I’m expecting the same as always: an invigorating and inspiring show that will leave me wanting nothing more than to spend the rest of my night banging on drums, hoping to be even a fraction as epic.”