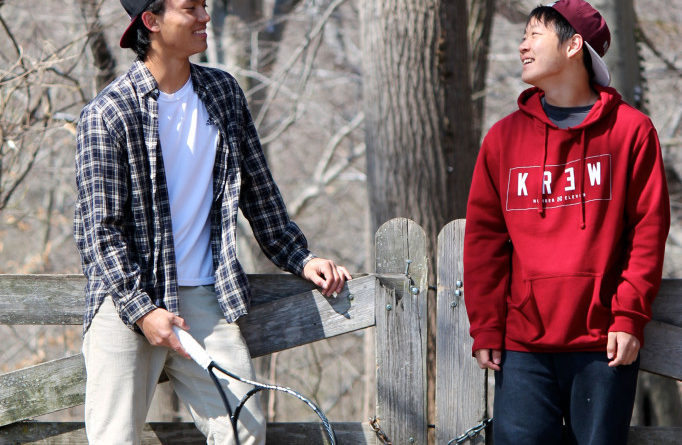 We often build our identities around the things that we do. For 15 percent of our student body, varsity athletics provides a striking visual reflection of that reality. There are functional and practical aspects to the predominance of certain styles among athletes, but it is also a matter of pride and a reflection of community. In interviews with club and varsity athletes, Hi! Fashion and this week’s collaborator, sports writer Daniela Wertheimer, look at the ways the NARP-interpreted “sports aesthetic” is viewed by those within sports culture, and why some athletes choose not to adopt it.

For those that don’t know what “NARP,” a term that we were also ignorant of before talking with lacrosse player Macrae Wimer ’17, means it is an acronym for “Non-Athletic Regular Person.” Within certain circles of the Swat athletic community, labels like “NARP” indicate that there is indeed a split in dress, attitude and interest between athletes and NARPs.

That the term “NARP” even exists evidences an inclination to label oneself as an athlete, to create an image separate from that of non-athletes.  But identity for many athletes doesn’t only lie in the sore muscles after a tough workout, the pride felt after a big win or other direct indications of athleticism. Athletic identity is something to be deliberately externalized, frequently through fashion.

Wimer explained to us that as a lacrosse player, he has been receiving athletic gear since middle school in such high quantities, in fact, that he has had to throw away t-shirts. From group lacrosse team orders organized by a teammate, to purchases made by the college itself, the gear continues to accumulate, providing varsity athletes with practice clothes and other emblematic pieces of sportswear.

The culture of competitive sports rewards its players with clothing in a very automatic way. By putting clothing in its athletes’ closets, a team practically influences its members’ wardrobes, not necessarily consciously. Additionally, because the clothes are typically comfortable, athletes are inclined to wear these clothes, on and off the field.

But there is more at stake in this apparel culture than comfort and functionality. While athletes do receive much of their clothing as a byproduct of their participation in sports, there is undoubtedly an element of pride underscoring the purchase and adornment of team-related apparel. Buying a new team jacket is not really a question of necessity, it’s more a question of streamlining one’s look in order to curate a personal and team aesthetic.  And, indeed, there seems to be intention behind this curation.

Tess Wei ’17, on the track team, explained that there is pride associated with putting on your team jacket, and so explicitly associating yourself with your sport. A team is a supportive group, and a sport is the focus of intense effort. Displaying your pride in that group and the effort you exert with it through the medium of fashion, which is an overt and easily readable sign of athleticism to athletes and NARPs alike, shows both the role clothing plays in expressing our social and emotional commitments and our desires to bind ourselves publicly to those commitments.

Emma Sipperly ’14, a member of both the lacrosse and rugby teams, exemplified the importance of using apparel to emphasize pride in athletic achievement, rather than in social identification.  Sipperly’s reaction to the “pinney trend” is particularly indicative of the contrast between wearing sports apparel to indicate pride versus wearing it for fun. Pinnies can be purchased in most college bookstores now, but Emma explained that within the lacrosse community, you are awarded specific pinnies at specific tournaments, which you attend based on athletic achievement. “A pinney is earned, not bought,” explained Sipperly.

Although there is a distinctly achievement-based pride associated with some of the apparel, the fact that much of it transitions deliberately into social spaces for athletes themselves marks the clothing as an important statement about social identity. Wimer deliberately wears a pinney to every party, a tradition passed down to him by an older member of his team. In the most distinctly social of environments, where everyone dresses the part of their identity they think will impress, he chooses sportswear.

Thomas Vernier ’17 and Alex Min ’17, members of the tennis team, explained that when they started wearing sweatpants to class as finals week approached, “People cut you some slack because you’re an athlete.” Clothing that might be considered inappropriate for NARPs is acceptable on athletes because of their supposedly functional relationship with that clothing. Being on a team transforms the athlete’s relationship to social space. Clothing often reflects this relationship, which is not only discernable to them, but also to the larger Swarthmore community.

Sipperly’s reservations about the appropriation of the pinney weren’t about the context the pinnies were being worn in, but about the people who were wearing them. The relationship between the practical and social use of athletic clothing for athletes is fluid and distinct from that of NARPs, who can never earn this clothing through skill. NARPs’ exclusion from this type of visual expression has ambiguous meaning for the Swarthmore community as a whole. Ben Mercado ’14, a Swarthmore squash player, does not present as an athlete; he is typically dressed in what he described as a juxtaposition of casual clothing, which is sometimes sportswear, and formalwear.  This synthesis of casual and formal aesthetic, he says, reinterprets the function and meanings of those seemingly incompatible clothing items and aesthetics.

What differentiates Mercado’s sport, and perhaps Mercado’s style, is that squash is a club sport, not a varsity sport. He had never played squash before coming to Swarthmore, and still spends the majority of his time outside the team. The lighter claims that club teams place on athletes’ time, and the athletes’ typically shorter history with the sport, reflect in many instances a looser association with the athletic community and aesthetic.

Swarthmore’s official listing of club sports includes nine distinct activities, from rugby to fencing to Ultimate Frisbee. The team descriptions advertise specifically to beginners and newcomers. Those without any experience, many of the advertisements read, are welcome. It is in the spirit of inclusion and inexperience that club teams form, which often means that they are highly diverse — athletically, racially, in level of commitment and otherwise.

This also means, many times, that participation in a club sport is not the prevailing interest of a majority of team members. Of course, it is entirely possible to be passionate about a new activity, but it is less likely that a new sport that someone has taken up in college will have shaped someone’s identity and fashion sense as fundamentally or fully as it has shaped the identity of varsity athletes, many of whom have been playing their sport since childhood or early adolescence.

The inherent diversity of club teams, it appears, has failed to create a unifying or defined aesthetic, except for the noticeably disparate fashion sense of the members of these teams.  As many club athletes have emphasized, their other interests, such as theatre, music and art, have influenced their clothing choice more than their sport has.  That does not mean, though, that club sports are completely devoid of a unifying piece that identifies them, however comparatively quietly, as athletes.

Azikiwea Green ’17, Mercado’s teammate on squash, noted that the squash team apparel is limited, though existent. He was unsure of whether we’d noticed him wearing his black team jacket, embossed with the squash team’s logo.  Green’s uncertainty emphasizes the relative unimportance of the singular squash-related garment in his wardrobe. Nonetheless, the club athletes embrace their sport and show, though to a lesser degree than varsity athletes, their pride and interest in athletics through their sports-related fashion.

For Sulamita Garbuz ’15, the rugby winter jersey, a classic striped rugby shirt with her name displayed in bold white lettering on the back and the Swarthmore Women’s Rugby logo appliqué on the front, has quickly become a wardrobe staple. Garbuz has been fawning over the shirt ever since she got it, and wears it not only as a symbol of her belonging to the women’s rugby team, but also because the jersey is comfortable and fashionable.

Club sports attract members on the basis of the sport itself, and perhaps also the learning and community-building opportunities they offer. Varsity sports unite students not only on the basis of the activity, but also on that of their historical relationships with it and the more extensive cultural influence it plays in their lives and on their bodies from the early beginnings of their training.

Several of the athletes asked us if we wanted them to talk about whether or not the visual nature of student athletic style, particularly of the pervasive “varsity jacket,” created a social divide. They were picking up on our curiosity; something so distinctly exclusive, those lined-up jackets on the convenient side of Sharples, must have a social effect as it traverses a social world.

But the athletes, after short pauses, declined the implication of insularity suggested by the athletic jacket and the athletic apparel that accompanies it. Although they saw the social effects of their clothing choices, and valued the team community solidarity it in many ways reflected, they refute the idea that those choices produce alienating effects. For them, the lack of deliberation behind many of their aesthetic choices reflects the lack of intention to draw a line between athletes and NARPs. One thought on “Aesthete athlete: Sport style at Swat”