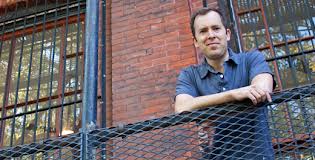 Assistant Visiting Professor of Theater Quinn Bauriedel’s “Movement Theater” course is arguably the most out-there course offered at Swarthmore College. Those theater classes you’ve heard about where students roll around on the ground? — this is it. It’s also an extraordinarily moving experience (no pun intended) in which students learn about themselves and their abilities.

Jeannette Leopold: You just did your final projects for the class. What were they like?

Anita: It was our final exam — 15 movements that we’ve learned over the semester. There’s “the wall,” which is basically pretending to climb a wall, with 21 specific things that you have to do. Ice skating, handstand, cartwheel, wheightlifting. Masu—[Anita and Nathan stood up and moved their hands in front of their faces and around their bodies to show “masu”—it’s very hard to describe]. Then we had to put them in an order that we thought would flow well. People did a lot of fascinating things.

JL: Was this an individual assignment?

A: This was the only individual thing we had to do for the class, and it was horrifying. Alejandro’s [Bellon ’15] was probably the most entertaining project, because the way he ordered it was like a story. Koby Levin’s [’15] was almost like a story. I knew I didn’t want to do a story, because I wanted it to flow. [Bellon’s] wasn’t a story, but he added humor to everything that he did.

Nathan: He always goes for it. Whatever he does he goes for it, which makes it great no matter what happens.

A: I think we learned a lot about each other today.

N: Everyone’s was so good because everyone was owning it with our gaze. [Note: the idea of “gaze” is very important in theater, as it represents belief in the truth of the make-believe; someone can see something that is not really there with their “gaze.”]

JL: You have an open-to-the-public presentation on Thursday. What will that be like?

A: So maybe something that’s important to say is that Quinn studied Lecoq [a French theater teacher who Quinn and other members of Philadelphia’s Pig Iron theater company studied under] so the class follows Lecoq’s pedagogy.

N: With a Quinn flair.

A: We have a thing called auto-cours, where it’s sort of students working together outside of class to display what they’ve been learning about in class but on their own, so we had different units…

N: The outcomes of these units are what we’re gonna show on Thursday. Tragic chorus…

A: We studied tragedy, then the idea of a chorus, like a small group of people moving all together, how they are affected by tragedy as a group. Then melodrama. Pretty much what we learned about melodrama is one character makes a permanent decision…

N: That can’t be undone and that has some effect on everyone after the fact. Heavily emotional but not trying to be cheesy.

A: Also mimeurs, and mimeurs create the space, draw the environment before people are in it, physically and emotionally. So, if a character’s heart is breaking, the mimeur can show that, as well as create tables for the room. We created this story based off of the story of Michaela’s grandmother. Quinn encouraged us to tell stories that we’ve heard, and stories about our lives.

N: The last unit we’re doing is mask work. We started the class with the neutral mask, which is a mask with a neutral expression, and when you put it on you’re trying to do away with the idiosyncrasies of your body, and you try to be bigger than yourself and very present in space. So we basically did the impossible but it’s a very helpful exercise. Then once you strip away your own body’s weirdness, you put on character mask. They’re hilarious. We use Commedie dell’arte and Balinese masks, he’s mixed them.

A: The one in our group Quinn actually made, so that’s fun. He made it in Bali.

N: They have strong expressions that evoke a character, and you try to create the character in the mask in your body.

JL: What was your favorite class activity?

A: We were chickens. We did the amazing experience of feeling what animals might be like. We had to study the animals and watch videos about them, and you’re trying to be the animal, not play at being the animal.

N: Trying to approach chickenness. I think the craziest thing, most exciting slash craziest, was when we did handstands on top of each other. So someone kneels on the ground and you grip their torso and fling yourself over their body and put your weight into their chest, and it’s actually much easier to do a handstand with someone else than by yourself.

A: We all learned to be very comfortable with each other. We all trust each other.

JL: Do you recommend this class?

N: Yes, but only if you’re excited about it because the majority of the work is done in class, that’s why it’s five hours a week, so you have to be willing to put yourself into it. I don’t know if there are many other classes where you’ll learn as much about yourself and your body and your relationship with space and others.

A: Most people in the class have said that they learned the most from this class out of all their classes this semester.

JL: Is there anything else you want to add about the course and your experience?

N: For me the takeaway from the class is that everything is done in a space of play, and also the initial assumption is that no one is going to be great at it the first time, but everyone will get there. So no one ever says anything discouraging, which makes it possible for everyone in the end to get there. All of these things that I thought in my life I’d never be able to do, like a handstand or a handstand on someone else or a cartwheel, I can now do because of the supportive environment that doesn’t question people’s ability, but just says everyone will try and everyone will get there.

The class’s final presentations are this Thursday, May 2nd at 5 pm in Upper Tarble, and will last for about 45 minutes.