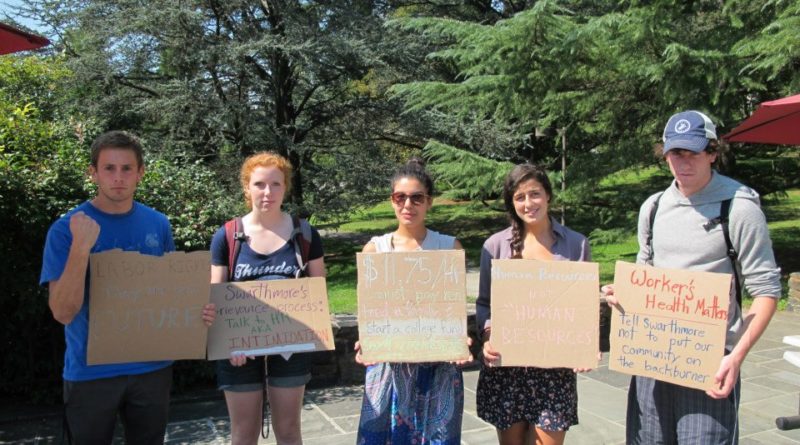 The Swarthmore Labor Action Project (SLAP) has hosted a myriad of events on campus during the past two semesters, with the ultimate aim of working establishing justice and dignity in the workplace.  According to the college’s website, SLAP has been working for “with mushroom workers from Kennett Square, supporting their campaign to fundraise for a new community center in which their union can meet.”  During the past two semesters, the organization held two staff appreciation events, as well as invited various notable activists to campus to speak to students about SLAP’s current campaign.

According to the mission statement, SLAP “envision[s] a society in which all people have empowering, fulfilling work and dignified material conditions.”  One of the upperclassmen in the organization, Ben Wolcott ’14 decided to become involved with the Swarthmore Labor Action Project when he realized that “its campaigns would be a great way to concretely work towards economic justice.”

A previous member of SLAP, Raisa Reyes ‘15, decided to get involved with the organization because she feels that “workers’ rights, at all levels, affect the entire work force.”  Reyes asserts that “joining in the effort to improve working conditions helps improve the conditions of individuals’ lives and the ethic and standard of how people should be treated as individuals and workers in the United States.”

According to Wolcott, the organization held a Staff Appreciation Pancake Breakfast in Shane Lounge in early March, as well as a Queer Homeless Transition into the Queer Workforce, which was held in the Scheuer Room towards the end of last month.  This lecture included talks by Jay Toole and Juliet Johnson on “the challenges that homeless people who identify as queer face while searching for jobs,” according to the event’s flyers.

Linda McDougall, director of dining services at the college, said that she, along with an extensive group of dining hall workers, attended the pancake breakfast.  McDougall said that the dining hall workers appreciated the gesture, as well as the greater cause of SLAP. At the start of the semester, SLAP also held a POWER petition (Philadelphians Organized to Witness, Empower, and Rebuild) in Sharples Dining Hall.

In addition to these various organized events on campus, Wolcott explained that SLAP have had students dress up as notable activists, including Upton Sinclair and Alice Paul, and pretend to give speeches from these characters’ points of views. These characters will visit campus again to talk to students during study breaks about SLAP’s most recent campaign: working with staff and faculty to try to get childcare benefits. SLAP will also be hosting a Chow & Chat About Childcare on Campus event in Science Center 105 on April 9th at 2:00 pm.

Wolcott is confident that the organization has “succeeded in making the college define which labor practices the operator should follow in the [proposed Swarthmore Inn] and will continue to advocate for workers’ rights if there are not adequate protections.”  Wolcott is optimistic about the future of the organization and the most recent campaign for childcare, expressing his confidence in SLAP’s ability to “win tangible benefits for [both] staff and faculty.”