Campus Journal » Columns » Our Fashion, Ourselves: Eclectic Art on Fashion at Penn’s ICA 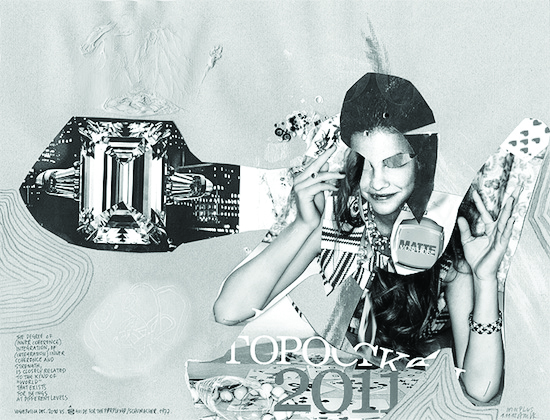 “White Petals Surround Your Yellow Heart,” on view until July 28th at the University of Pennsylvania’s Institute of Contemporary Art (ICA), considers a topic that has often been discussed in our postmodernist, institution-and-society-questioning age: how fashion relates to our narcisstic tendencies as human. But the exhibition itself proves to be incredibly more complex and difficult to ponder than what that topic normally garners.

This is not the kind of exhibit that obviously promotes its conclusions and allows viewers to pat themselves on the back for being clever and “above it all” while they wittily discern how the art on display criticizes our self-absorbed society. I’m not even sure if I understand the meaning of this exhibition, because I think that the nature of it is such that it will provoke different reactions­, even emotional ones, in each individual viewer.

There is no sense of an A-list celebrity starring in this show, which is usually the case when one visits an exhibition in a museum. You can usually tell that there is one artwork on display that is considered more valuable than the others, with all the additional pieces serving more as accompaniments to the major piece on display. Even if there is no sense of one work carrying more importance or expectation than the other works, usually there is at least a sense of name-dropping occurring because some artists whose work is on view are much more famous than the others.

Here, museum-goers don’t just circle around an individual work specifically while everyone else picks up the attention of a few stragglers. You can also usually tell which works are considered more important by the curators based on how much information accompanies them. If the exhibition brochure, the caption next to the painting and the audio tour all burst with words about that one artwork, then you know that the museum feels quite proud of itself for being able to display it in their building.

None of this exists in “White Petals Surround Your Yellow Heart.” None of the artists represented are particularly famous — no Damien Hirst sharks or Jeff Koons pink panthers here — and no one’s piece gets a prominent space in the large, high-ceilinged and cement-floored gallery. As a result, we as viewers are not primed with any expectations about what is especially important for us to appreciate here, nor do we have to worry about what we might be missing if there is a certain art piece we don’t “get.” We are left completely alone with our thoughts and ideas.

The only hints that the show gives as to what it is trying to tell us are esoteric quotes that accompany some of the artworks under their descriptive captions. One particularly perplexing example comes from Zachary Lazar’s novel Sway. It accompanied an assemblage of sorts that included an umbrella covered in shiny black sequins and was garnished by a black top-hat that perched on top of the umbrella as if it was wearing it: “Style has an aura that words only diminish. The words follow, trying to explain, but the glamour fades in the glare of opinions and ideas. There is no more Lucifer now, no more Prince of Darkness, no more Angel of Light. There is a return to what was always there before, the silence.”

I’m not sure why the curators of this exhibit found this quote to be particularly fitting as an accompaniment to the piece, and I’m not even entirely certain of how that quote pertains to the exhibition. What it does speak to, I think, is the ineffable power that fashion style possesses for everyone.

Since every human who can afford them has to pick their clothing, they all engage in the definition of their style, which is one of the clearest indications of who we are to the strangers we encounter in everyday life.

As social beings, our ability to acquire social capital is a skill on which we probably spend nearly all of our energy, and our fashion choices are one of the primary ways that we work to gain the kind of social capital we desire. Naturally, then, we tend to settle on a personal style that we really like, something that we can live with every single day and is one that we can fall in love with. Thus we tend to fall in love with our wardrobes; it is the closest that most of us get to making art.

Because of this tendency, the exhibition has a focus on narcissism, and the story of Narcissus from Ovid’s Metamorphoses serves as the inspiration for its title. In the exhibition brochure, an excerpt from Metamorphoses that details the story of Narcissus and Echo, a boy who fell in love with his own reflection and a nymph who fell in love with him. When Narcissus died from starvation and lack of sleep after staring at himself for so long, his body disappears, and all that is left in the place where he once gazed is beauty, “a flower with a circle of white petals round a yellow center.”

But as the notes from the Associate Curator of “White Petals Surround Your Yellow Heart,” Anthony Elms, remind us, “[Narcissism] is self-evaluations at the work place, profile pictures for you social media, and looking at yourself in the mirror leaving the house. Oscillating between branding, self-recognition, sexuality, political uniform, and status, our adornment always reflects a chosen position in and with society. And that position projects what we value. Remember, the mythic figure Narcissus initially didn’t think he was transfixed by his own reflection in the pond, but by a beauty the likes of which he’d never seen.” It’s the case that when we put on our fashion, we adopt a motto about ourselves, and the fact that we fall in love with that motto is not exactly vanity. It does, however, reveal who we are, just as paintings reveal the identity of their painters.

With this brought to my attention, I thought about why certain artworks had a strange appeal to me that others in the show did not.

One such piece was a three-minute black and white digital video made in 2012 by fashion photographers Inez van Lamsweerde and Vinoodh Matadin called Vogue Paris Studio. With the song “Coyote” by Paul Cary playing in the background, the short video consists of a single woman who appears to be a fashion model that stares at the camera wearing different outfits in each shot. She makes a few different gestures and poses in different positions, her eyes haunting when she looks up at us. About 20 seconds in, we suddenly see this woman’s head unnaturally extend upward, as if invisible hands are stretching her head like putty. Her mouth opens as if the flesh is melting off her face. In the next shot, another distortion occurs, with her waist narrowing to an impossible width. Her neck soars flamingolike, and then her fingers extend out as she turns to look at the camera.

The movie passes by in what feels like thirty seconds, and I don’t know why this specific art piece captivated me more than anything else in the exhibition. And I expect that this is the type of show that will captivate each viewer dramatically differently.

This show feels like a workout for the brain. It doesn’t go down easy and takes more thought than usual to understand. Sometimes this can indicate a show is simply so ridiculous, it defies logic or understanding. But I suspect that this show has some kernels of truth buried fathoms down, requiring an ample supply of mental shovels to dig it up to the surface. If Monet and Renoir, whose art certainly isn’t superficial or overly abstruse but is and immensely popular, are art’s favorite hits, “White Petals Surround Your Yellow Heart” is a penetrating deep cut.